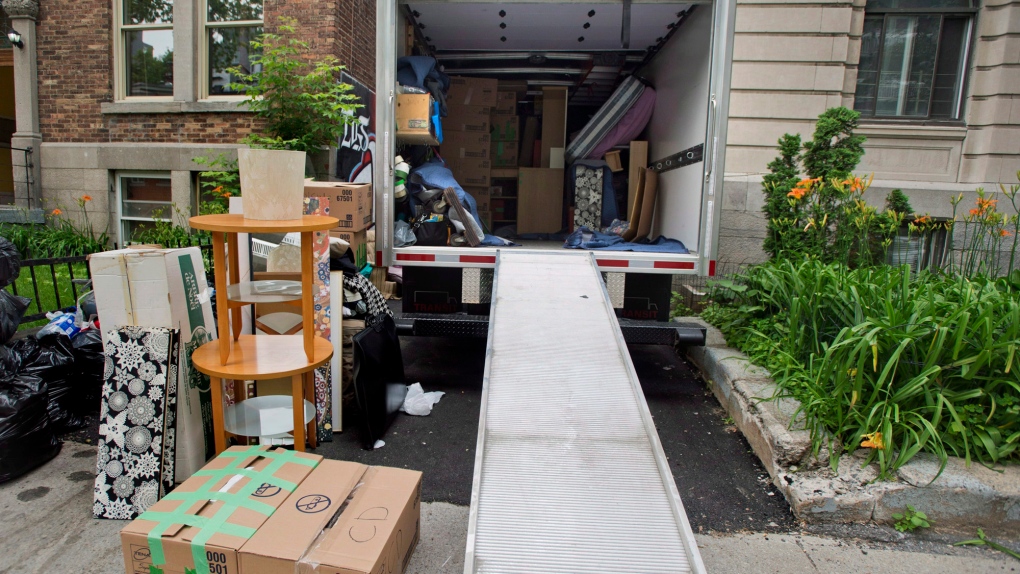 Housing advocates are urging the Ontario government to halt all eviction orders due to the COVID-19 pandemic. (Graham Hughes/The Canadian Press)

TORONTO -- Housing advocates are urging the Ontario government to halt all eviction orders that could leave people homeless and forced into the already-packed shelter system amid the COVID-19 pandemic.

A committee of lawyers, paralegals and housing advocates sent a letter to the Attorney General of Ontario Sunday urging the government to immediately cease all enforcement of existing eviction orders and postpone all hearings related to evictions.

Cole Webber, a member of the committee, said that his office at Parkdale Community Legal Services is dealing with dozens of residents facing eviction, including families and low-income residents despite health officials stressing the importance of staying home.

“We are already in a housing crisis in the city … there are not many available places and rents is very high, [and] so for people, especially low-income people, finding a new place can often be impossible,” he told CTV News Toronto Monday.

“Clients always express worry about being evicted from their home, the eviction is always devastating and traumatic, but only more so in the context of a public health crisis.”

He said as health officials stress the importance of staying home and away from crowded areas, the option to do so could become impossible for people facing eviction in the Greater Toronto Area.

I just got off the phone with the Toronto Sheriff's Office. I called to inquire about having an eviction order enforced. I was told that as of right now eviction enforcement is continuing as usual, in the midst of a pandemic.#COVIDー19 #onpoli #topoli

“Public health officials are already concerned about the intensity and quickness with which the virus could potentially spread in places like homeless shelters; so it’s not the time that we need more people coming into already overcrowded shelters,” he said.

Ontario Premier Doug Ford was asked by reporters at the legislature Monday if the province plans to stop evictions so people are not forced out of their homes, and he responded that “everything is on the table.”

However, a spokesperson with the Ontario Minister of Municipal Affairs and Housing office told CTV News Toronto that the government is "actively" looking into measures to halt eviction at this time due to the pandemic.

In order for a tenant to be evicted from a home in Ontario, the landlord must apply to the Landlord and Tenant Board for an eviction order. If a hearing is scheduled, the board can then decide to issue an eviction order, which is then enforced through a municipal sheriff's office.

The board has said it’s postponing in-person hearings and will reschedule them to a later date due to COVID-19, but also noted that “where feasible, alternative hearing options such as written and telephone hearings will be considered.”

Eviction orders that have already been issued are also scheduled to be carried out, which means that a sheriff could come unannounced and change the locks of a family or person’s home during the health crisis.

I am part of the Greater Toronto Clinic Housing Advocates who are calling for a halt on ordering and enforcing evictions during the Covid-19 outbreak @douglasdowney @ONAttorneyGen pic.twitter.com/odFrpwTXIm

If the sheriff locks someone out, they only have 72 hours to make arrangements to get their belongings.

The Greater Toronto Clinic Housing Advocates, the committee which sent the letter Sunday, asked that all eviction orders be stopped for now, and that the Landlord and Tenant Board avoid scheduling telephone, electronic, and written hearings of eviction applications as well.

The committee, which work to protect the rights of tenants in the Greater Toronto Area, said that regions like New York, California and Florida have all take similar steps due to the pandemic.

The group said it’s worried that the issue will become more prevalent as an increasing number of Ontario workers face sudden income losses due to school closures, unpaid time off and layoffs.

“We are going to see it more and more as people with jobs who are sent home from work without sick pay … it’s going to become more and more of an issue,” Webber said.

A total number of 177 people have tested positive for COVID-19, and health officials are recommending drastic measures to contain the virus and prevent community spread, including social distancing and staying home if ill.

CTV News Toronto has reached out to the Attorney General of Ontario’s office and the Tribunals Ontario for comment, but has not yet received a response.