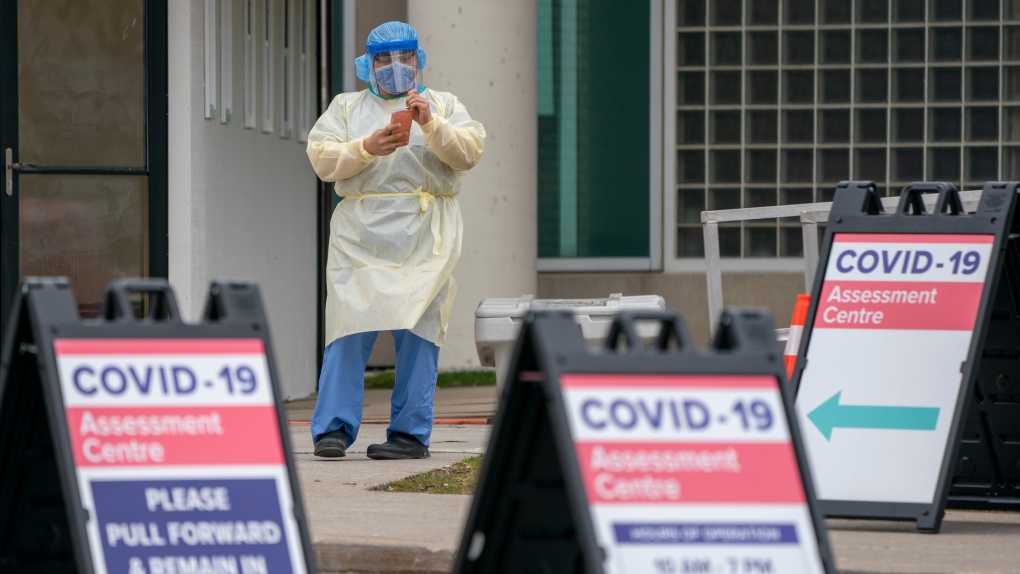 An intake nurse waits for patients at the COVID-19 testing centre in Toronto on Saturday April 4, 2020. THE CANADIAN PRESS/Frank Gunn

Saturday’s significant drop in cases comes after a week of relatively low numbers of infections recorded by the province, with the exception of the 477 new cases reported on Friday.

Ontario's Health Minister Christine Elliott said that the low number of new cases and the 1.8 per cent daily growth rate (the lowest since March) are both "very encouraging signs."

“We need to make sure that we continue to have a lowering of numbers," Elliott said at a news conference on Saturday.

"As Dr. [David] Williams [Ontario's Chief Medical Officer of Health] has said though, this isn’t going to be a big step down its going to be a gradual lessening in the number of cases. And that’s what we’re seeing, even with heightened test results."

“It’s something that we’re going to continue to focus on. We need to see these numbers keep coming down as we gradually open more and more parts of our economy."

Elliott's comments come after the government announced it would open 500 of Ontario’s provincial parks and conservation areas for “day-use only” as of Monday.

The majority of deaths in the province are in people over the age of 80, according to Saturday’s epidemiologic summary. There are 1,123 deaths in that age group alone, followed by 401 deaths in people between the ages of 60 and 79.

Deaths in Ontario long-term care homes account for 74 per cent of all deaths recorded in the province.

As of Saturday morning, 1,187 residents in those facilities have died as a result of COVID-19, while 2,773 more residents have tested positive for the virus, according to the Ministry of Long-Term Care.

There are currently 237 confirmed outbreaks of COVID-19 in Ontario’s 630 long-term care homes.

The province also recorded two new deaths in people between the ages of 40 and 59, bringing the death toll for that age group to 68.

Hospitalizations for COVID-19 in Ontario have dropped significantly to 1,016, a decrease of 72 patients over Friday. Of those 1,016 in hospital, the province says that 203 patients are being treated in an intensive care unit, 158 of which are breathing with the assistance of a ventilator.

Right now, 3,291 health-care workers have contracted the virus, an increase of 61 workers since Friday’s report.

There are 15,307 tests which are currently under investigation.

And as Ontario continues to ramp up its testing for the virus, the positivity rate is dropping.

Dr. David Williams has said in the past that the positivity rate is crucial to understanding the spread of the virus in this province as well as informing the eventual easing of restrictions. 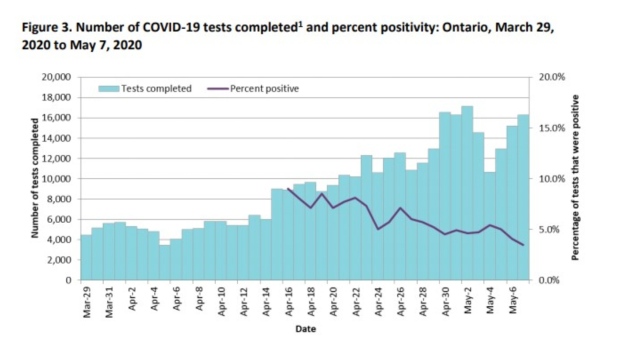 Quick facts on COVID-19 in Ontaro:

Those protesting Ontario’s COVID-19 emergency measures returned to Queen’s Park on Saturday for the third time in as many weeks.

Some 100 people attended the event, a clear violation of the province’s emergency order which prohibits gatherings of more than five people.

The protesters, which premier Ford has previously described as “yahoos”, were seen in close proximity to one another and carrying signs that included phrases like “live free or die”, “end the corruption” and “God reigns supreme” among others.

The fine for not keeping at least two metres apart from another person (that you don’t live with) is set at $880 in Toronto, though it’s unclear if any such tickets have been issued.

Toronto police say they are aware of the situation and say that officers will be on scene to assist with physical distancing. 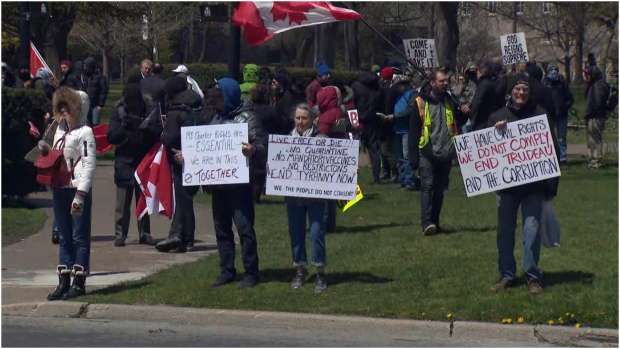