Public-sector teachers in Ontario will see their wages increase by more than one per cent as legislation aimed at capping compensation for those workers is set to expire later this year.

Premier Doug Ford addressed Bill 124 during an unrelated news conference on Thursday, where he marked the upcoming cut to the provincial gas tax which is set to take effect on Friday.

“Well what I can tell you is, their [public-sector teachers] increase is going to be more than one per cent,” Ford said.

The Progressive Conservative government passed the legislation, dubbed the Protecting a Sustainable Public Sector for Future Generations Act, in November of 2019 to limit wage bumps for public-sector workers to one per cent a year.

Touted at the time as a time-limited approach to help eliminate the deficit, the provisions were only set to be in effect for three years, but Ford has stayed tight-lipped on whether or not his government will repeal or extend the measures.

His comments come as the Canadian Union of Public Employees (CUPE) -- which represents 55,000 education and other frontline workers in Ontario -- held a news conference at Queen’s Park to call for an end to the controversial bill, which also limits the wages of those working in the province’s health-care system.

“In light of historic inflation, currently at 7.7 per cent, that [one per cent wage increase] amounts to an unacceptable wage cut. This means that frontline workers – like PSWs, RPNs, caretakers at Universities, and so many others—are now struggling to make ends meet let alone get ahead,” the union said in a news release.

Now’s the time to finally repeal the Constitution-violating legislation which caps total compensation, including wages, for public sector workers to only 1 per cent, said the Canadian Union of Public Employees (CUPE) Ontario during a press conference.https://t.co/vwMUHCfvjk

Amid the calls to repeal the measures in the face of growing inflation, Ford said he has “all the confidence” in Education Minister Stephen Lecce, who is tasked with negotiating the details of some major teacher contracts that are set to lapse. 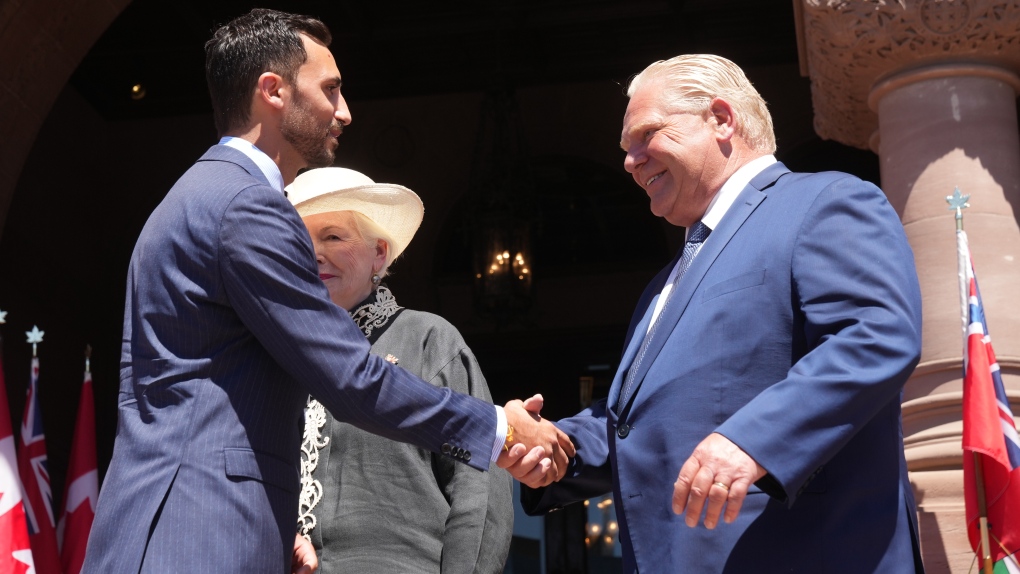 Stephen Lecce, Minister of Education shakes hands with Premier Doug Ford as he takes his oath at the swearing-in ceremony alongside Lieutenant-Governor of Ontario Elizabeth Dowdeswell at Queen’s Park in Toronto on June 24, 2022. THE CANADIAN PRESS/Nathan Denette

Ford went on to say that while the increases teachers will see will not be “through the roof,” he maintained that negotiations will be “fair” and keep students in the classroom.

“I get it, I understand costs are going up. But we cannot have the kids out of school, no matter what,” he said.