As the City of Ottawa prepared for a state of emergency, amid what police services in the region believed was an “insurrection” by "Freedom Convoy" protesters, Ontario’s Premier Doug Ford was spotted on a snowmobile trail in the Muskoka area.

In two photographs, posted to social media this week, the premier is seen dressed in winter gear – wearing a snowmobile helmet – and posing for pictures with another group of snowmobilers outside a warm-up station.

“Look who I bumped into snowmobiling on beautiful trails of Muskoka, Premier Doug Ford,” the Facebook post reads.

A member of the group who met the premier confirmed to CTV News Toronto the interaction took place on Saturday, Feb. 5.

When asked about his whereabouts on the weekend at a news conference Friday, Ford admitted to being at the cottage, defending his decision by saying that he was on the phone “almost 24/7.”

A spokesperson for the premier later clarified that Ford was advised by his OPp detail "to leave the city on Saturday given the repeated protests outside his home and in light of the planned demonstration in Toronto."

CTV News Toronto spoke to one of the people who met with the premier on Saturday, who said the interaction was “very unexpected.”

The individual, who did not want to be identified, said the group was warming up in a bunkhouse on Feb. 5 along the trails when they heard another group of people outside.

“We were approached by, we didn't know who they were, they were just gentlemen that were dressed in snowmobile outfits, and they asked us if we were alone and if we were interested in meeting the premier,” he said.

The snowmobiler told CTV News Toronto the interaction was brief and that Ford spoke about how he was glad the group was enjoying some fresh air and doing something that was COVID-19 friendly. 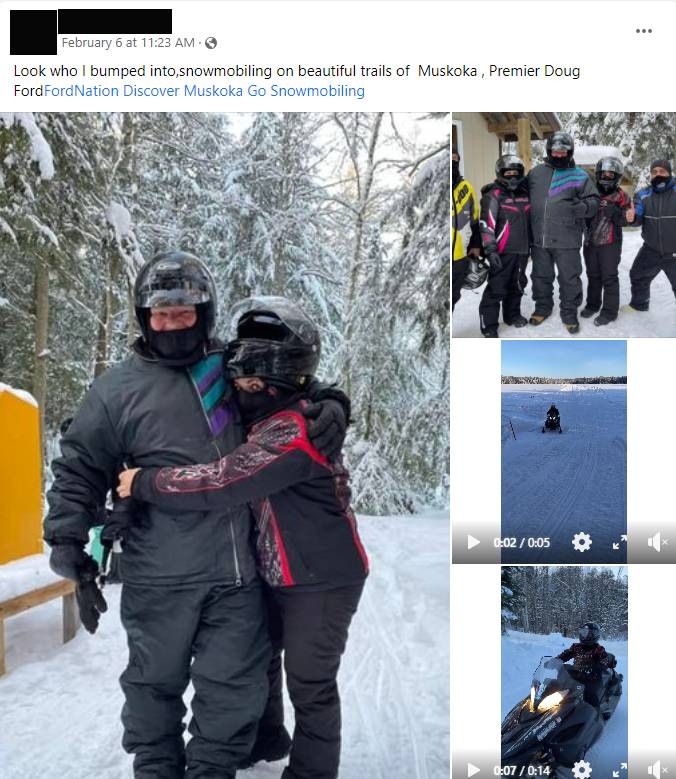 Ontario Premier Doug Ford is seen in photographs posted to Facebook in the Muskoka area on Feb. 5, 2022. (Facebook)

On Saturday, hundreds of demonstrators calling for an end to vaccine mandates and other COVID-19 measures shut down streets around the provincial legislature. Police took one person into custody for assault with a weapon, administering a noxious substance and public mischief. Several smoke bombs set off at a downtown intersection.

That same day Ottawa’s police chief called for “an additional surge of resources” as an estimated 1,000 vehicles and 5,000 people packed Parliament Hill.

"Ottawa residents are frustrated and angry, so are we quite frankly. They have every right to be; their lives in our city are being severely impacted by unlawful acts on our streets," Chief Peter Sloly said at the time.

The Ottawa Police Services Board chair and councillor went on to say the group is a threat to democracy and represented a “nationwide insurrection.”

The following day, on Feb. 6, Ottawa Mayor Jim Watson declared a state of emergency as dozens of armed police officers and firefighters moved to cut off fuel supplies to the so-called “Freedom Convoy” that had been occupying the streets for just over a week.

Ontario Liberal Leader Steven Del Duca said in a statement Friday that while no one “expects him to work 24/7” that Ford has been a “part-time premier” during the unfolding crisis.

“Now we know why Doug Ford has been so hard to find. If he actually cared about the people of Ottawa, he would have been working, not snowmobiling,” Del Duca said.

The snowmobiler who spoke with CTV News Toronto said the group wasn’t bothered by seeing the premier out in cottage country and that Ford is “entitled to some personal time” on the weekends.