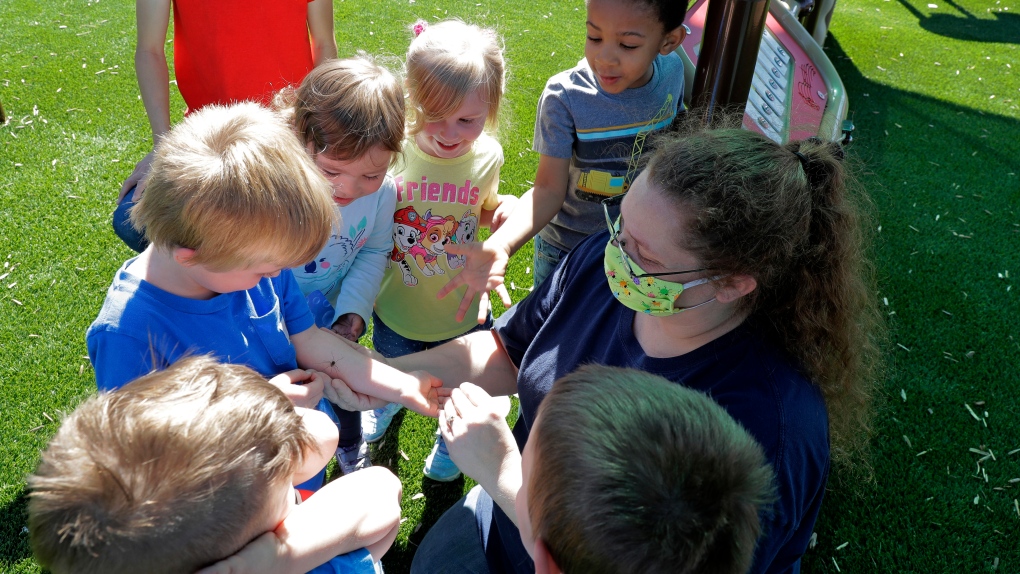 In this May 27, 2020 photo, teachers Jana Blair, right, and Aaron Rainboth, upper left, wear masks as they work with kids examining a spider they found on the playground at the Frederickson KinderCare daycare center, in Tacoma, Wash. (AP Photo/Ted S. Warren)
TORONTO -

Ontario Premier Doug Ford wants municipalities to wait for his government to strike a deal with Ottawa on child care instead of trying to start their own negotiations, saying they might undermine provincial efforts.

"I'm pleading with the municipalities: don't divide and try to conquer. It just doesn't work. Let's stay united as a province," Ford said after an unrelated announcement Wednesday.

"I'm not in favour of making side deals with the federal government with a municipality. That's just not right for the people of Ontario."

He made the comments as some city councils have started formally considering asking Ottawa to work with them on $10-per-day child care as federal-provincial talks drag on.

Toronto city council was to consider the idea this week with a motion that made the case for an affordable child care system as crucial to economic recovery from the COVID-19 pandemic.

Niagara Regional Council has asked staff to investigate their options for a federal-municipal deal, and Hamilton city councillors are set to discuss the possibility later this month.

The regions have stressed the particular impact a lack of affordable child care has on women, who have been more affected by employment changes during the pandemic, according to Statistics Canada research from earlier this year.

The federal Liberal government has inked deals with seven provinces and one territory on its $30-billion, five-year child care plan, which promises to cut child-care prices to an average of $10 per day across the country.

But Ontario, home to more than one-third of the Canadian population, has yet to sign on.

Ford repeated the position of Education Minister Stephen Lecce on Wednesday -- that he wants a deal on affordable child care but won't settle for the first offer.

"We need to stay united and we're going to get a much better deal than if you went it alone. It just makes common sense."

A spokeswoman for Families, Children and Social Development Minister Karina Gould said Tuesday that the federal government is "optimistic" about a deal with the remaining jurisdictions.

Mikaela Harrison also said the government is committed to working with provinces and territories on the program because they are responsible for child care.

The Ontario New Democrats said Ford should finalize the deal rather than "taking shots at local governments for doing the right thing."

"If other provinces can manage it, there's no reason for Ontarians to still be waiting," NDP child-care critic Bhutila Karpoche said in a statement. "Ontario needs access to affordable child care now."

This report by The Canadian Press was first published Nov. 10, 2021.