An Ontario mom is sharing the incredible survival story of her infant son.

Jaxen Green arrived premature, the size of Sharpie marker on Feb. 5. He was so tiny a ring could wrap around his foot, but four-and-a-half months later he's a big miracle - weighing seven and a half pounds.

"No one expects to gets pregnant and expects this to happen," Amanda Green of Bomanville, Ont. told CTV News Toronto in an interview Wednesday outside SickKids hospital.

When Green's water broke at 21 weeks and two days, four months before her due date, Jaxen’s life suddenly hung in the balance.

She said she then advocated to receive medical care at a high-risk obstetrics hospital in downtown Toronto.

"Where I later gave birth to Jaxen at 23 (weeks) and one (day), which he was a week passed viability. We signed the papers for full resuscitation. Given 10 per cent chances and odds of survival, a ton of deficits long-term and we took the chance on him." 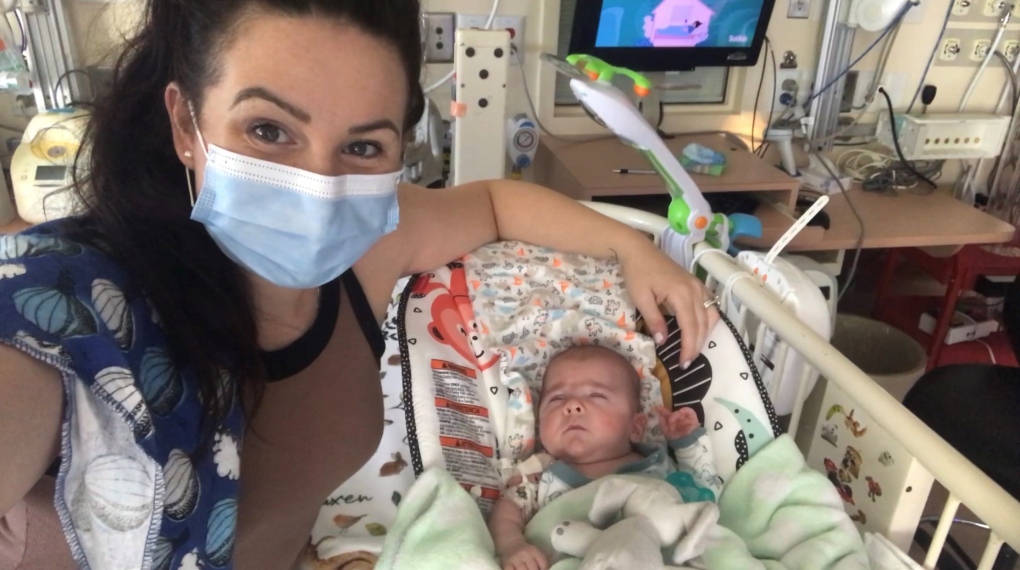 Three days later Jaxen was moved to SickKids, where in return he has been continually fighting and growing.

"I remember sitting there, leaning over an incubator being told it's day-by-day, hour-by-hour, sitting there crying filled with fear, so many unknowns," she said.

"And now you look at him and he’s this full baby. And we've completely watched him grow, we seen him develop in front of our eyes. His eyes were fused shut when we met him. So we’ve really witnessed the power of medicine and we are forever grateful for this hospital."

The family now spends a lot of time at the hospital, caring, feeding and holding their miracle baby.

Green is also raising money for the NICU at SickKids, proceeds from 500 teddy bears already sold are planned as a gift to the unit.

She is also looking at ordering a new shipment to donate even more money.

"Our little warrior is going to have the best future."

Green says while there is no crystal ball to what health challenges Jaxen may face long-term, they are hopeful his health will continue on an upwards trajectory and he’ll keep amazing everyone around him.

There was talk of impeachment Monday at the Trump Organization's criminal tax fraud trial -- not former President Donald Trump's, which happened twice -- but whether lawyers for his company were angling to impeach their own witness, longtime Trump accountant Donald Bender.

The Pakistani Taliban on Monday ended a months-long cease-fire with the government in Islamabad, ordering its fighters to resume attacks across the country, where scores of deadly attacks have been blamed on the insurgent group.