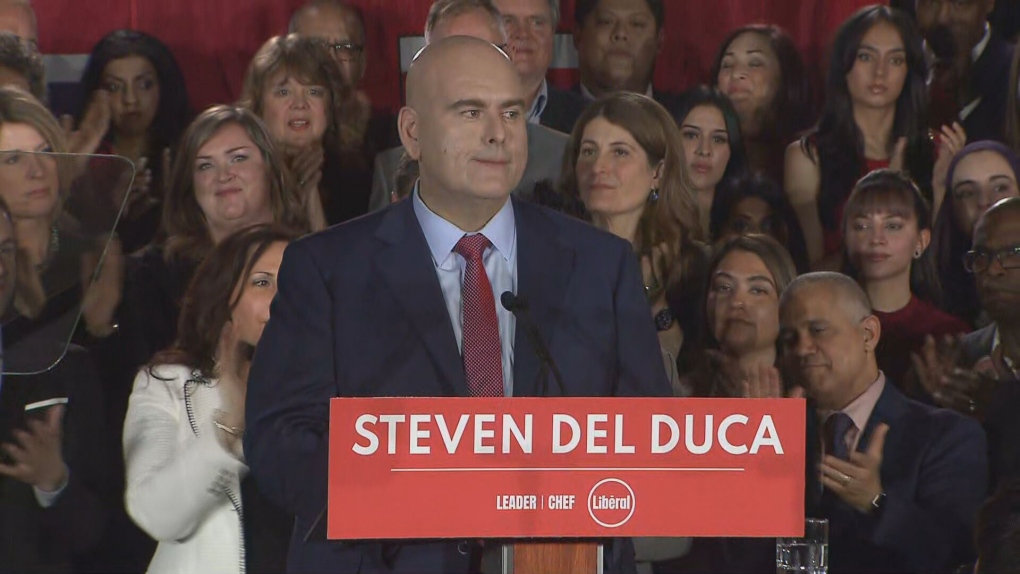 Ontario Liberal Party Leader Steven Del Duca speaks at an in-person gathering of candidates and volunteers at a Toronto hotel on Saturday, March 26, 2022.

Ontario Liberal Leader Steven Del Duca is promising that his party will boost the minimum wage to $16, work to set regional living wages, and compensate businesses for legislating 10 paid sick days if they win the June election.

The promises were contained in a campaign speech delivered Saturday to party members, billed as the Liberals' first in-person campaign event of the year. Del Duca said they are part of a plan for "economic dignity."

"It's time to give workers real protection for their livelihood," he said in prepared remarks.

"Look, our economy has changed and new ways of working won't end. That's okay. We can embrace innovation and create prosperity -- but we have an obligation to make it work better for more people."

"Then (we would) work urgently with all of our partners, to create a dynamic, regionally adjusted living wage, ending what has been, for far too long, a never-ending race to the bottom when it comes to workers and their families," he said.

A regionally adjusted living wage could be as high as $22 an hour in Toronto, advocates say.

Less than a year before the previous Liberal government was defeated in the 2018 election, it passed sweeping labour reforms, many of which the Progressive Conservative government reversed. It included a $15 minimum wage -- the Doug Ford government set the minimum wage at that amount this year -- as well as expanded personal emergency leave and equal pay for equal work.

Del Duca is also promising to bring back equal pay provisions, so that part-time, casual and temporary workers would be paid the same as full-time employees.

The Liberals' 2017 bill had guaranteed workers two paid personal emergency days, but they are now promising 10 paid sick days. Del Duca said Saturday a Liberal government would reimburse businesses for costs of up to $200 per day for that program.

As well, he said, the Liberals would eliminate corporate taxes for two years for small businesses that have been "deeply hurt by the pandemic." They would also end incorporation fees for new business start-ups and help small businesses transition to providing a portable benefits package, Del Duca said.

The Liberal leader also promised to create a package of "high-quality, affordable" benefits available to everyone, including gig workers and self-employed people.

"These benefits will be portable, belonging to the worker for their entire career, regardless of their employment situation, giving that worker a safety net that they can count on," Del Duca said.

A Liberal government would also classify gig workers as employees, he said.

The Progressive Conservative government recently introduced legislation that would establish employment standards for gig workers, including minimum wage and regular pay days, but does not address their employment status.

This report by The Canadian Press was first published March 26, 2022.