Progressive Conservative legislation that would prevent protesters from illegally blocking Ontario’s border crossings may still be too broad and could potentially have a “significant impact on expressive activity and peaceful assembly,” according to civil liberties advocates.

The “Keeping Ontario Open for Business Act” was tabled on Monday and, if passed, would provide law enforcement with the power to impose roadside suspension of drivers’ licences and vehicles, seize licence plates, and tow vehicles being used in a blockade at an international border.

When announcing the legislation, Solicitor General Sylvia Jones said the bill would be specific to illegal blockades that impact economic activity and international trade, and would not impact the right to peaceful and temporary protests at border crossings.

“Our goal is to keep Ontario open for business,” she told reporters at the time.

However, a lawyer with the Canadian Civil Liberties Association (CCLA) said she disagrees that the scope of the legislation is limited, saying it has the potential to be interpreted “quite broadly.”

“I think what this does or has the potential to do is sort of remove from people's arsenal some protest tactics, which might be controversial,” Cara Zwibel, director of the fundamental freedoms program with the CCLA, told CTV News Toronto.

The purpose of a protest is often to disrupt or disturb, Zwibel said, and while demonstrations can’t go on indefinitely, she believes the scope of the legislation gives law enforcement more power to step in.

The legislation prohibits illegal blockades that impede access “directly or indirectly” to an area resulting in a disruption to “ordinary economic activity,” but it also makes reference to blockades that interfere “with the safety, health or well-being of members of the public.”

“‘Well being,’ I'm not sure exactly how to understand that,” Zwibel said. “There's quite a bit of language in here, I think, that gives a lot of scope and a lot of opportunity for the exercise of discretion by police and that can be a dangerous thing.”

Zwibel asks whether labour actions such as strikes or pickets could be shut down, especially if it impacts travel over multiple days.

“If you're late for your flight, because there's some sort of action that's impeding your access, you know, is that a harm to your well being? Maybe, I'm not sure.”

The one area the legislation does provide limitations in scope is where the additional law enforcement powers apply—land or water border crossings between Ontario and the United States, as well as any airport that “regularly accommodates flights directly between Ontario and a country other than Canada.”

The bill also specifies these law enforcement powers can be used to protect “other transportation infrastructure that is of significance to international trade,” something that has the potential to be further broadened under provincial regulations.

In light of recent events that disrupted billions in trade, we are introducing measures to protect international #bordercrossings from illegal blockades that threaten #workers, #jobcreators, and the economic security of #Ontarians.

A spokesperson for the Solicitor General’s Office reiterated Tuesday the proposed measures are narrow in scope and would not impact peaceful, lawful or temporary protests. They said there was no concern the legislation is too broad.

“Workers, moms, and dads trying to earn a living rely on the ability to access our international borders. These measures are only about protecting their ability to do that, and we scoped them narrowly to meet that goal effectively and no more,” Hannah Jensen said in a statement to CTV News Toronto.

“We will always support freedom of speech and the right to protest; that should not come at the expense of the workers of this province as it did in the Ambassador Bridge blockade, which led to manufacturing facility closures, shift reductions, and halted billions of dollars worth of trade.”

WHERE ELSE IS THIS HAPPENING?

A similar piece of legislation passed in Alberta that protects essential infrastructure from damage or interference caused by a protest. It came into effect in June of 2020 and was almost immediately challenged by the largest union in Western Canada.

The "Critical Infrastructure Defence Act," also known as Bill 1, allows the government to heavily fine and imprison anyone unlawfully interfering with infrastructure such as pipelines, highways, utilities and oil and gas production facilities.

The legislation was introduced following a series of nation-wide protests that blocked railway lines in support of the Wet’suwet’en hereditary chiefs’ opposition to the Coastal GasLink Pipeline Project in British Columbia.

The Alberta Union of Provincial Employees argued the bill infringes on individual Charter rights and would impact the union’s ability to engage in a fair collective bargaining process.

Their claim was dismissed in December 2021. The union is now seeking a decision from the Supreme Court of Canada.

Bill 1 was not used when anti-vaccine mandate protesters stopped traffic along the Canada-U.S. border crossing near Coutts, Alta.

A similar protest blocking an international border crossing was what sparked Premier Doug Ford to table the “Keeping Ontario Open for Business Act.” A week-long anti-vaccine and anti-lockdown protest shut down the Ambassador Bridge in Windsor, Ont. in February, which resulted in traffic disruptions and snarled trade with U.S. 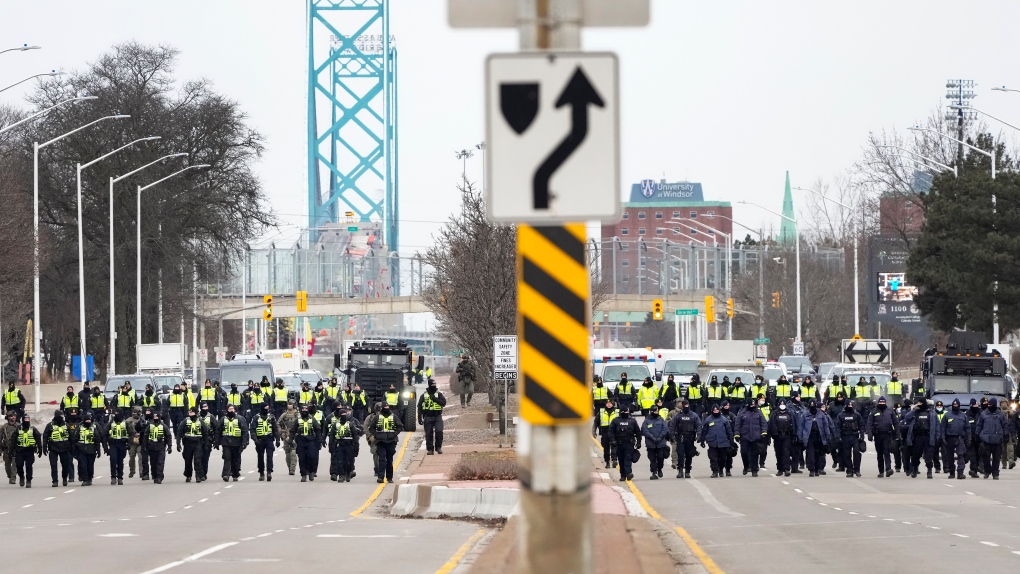 Police walk the line to remove all truckers and supporters after a court injunction gave police the power to enforce the law after protesters blocked the access leading from the Ambassador Bridge, linking Detroit and Windsor, as truckers and their supporters continue to protest against COVID-19 vaccine mandates and restrictions in Windsor, Ontario, Sunday, Feb. 13, 2022. (Nathan Denette/The Canadian Press via AP)

As a result, Ford declared a state of emergency to put an end to the “siege,” enacting orders that would allow police to fine or imprison protesters that do not allow for the transport of goods across international border crossings, as well as the 400-series highways, airports, bridges, ports and railways in the province.

At the time, the premier said the orders would “make crystal clear it is illegal and punishable to block and impede the movement of goods, people, and services along critical infrastructure.” Ford promised to put forward legislation that would make these protections permanent.

Meanwhile, in Manitoba, the government is looking at legislation that would tighten security at the legislature and ban certain activities from the grounds. Security officers would have the power to evict people or fine them up to $5,000 for not complying.

The legislation was proposed after two encampments—one that took place after the discovery of unmarked graves at former residential schools and the other against COVID-19 restrictions—were disbanded. No bill has been formally introduced in the legislature as of yet.

IS THIS LEGISLATION NECESSARY?

When Ontario first floated the idea of permanent legislation that would prevent illegal protests from blocking border crossings, the CCLA spoke out, calling it a “knee-jerk” reaction to the occupations of the Ambassador Bridge and downtown Ottawa.

They argued that police forces already possessed the power to tow vehicles blocking streets and to shut down roads to prevent a convoy from passing through an area.

Zwibel reiterated this when speaking with CTV News Toronto after the legislation was tabled.

“I do wonder how much of this is really necessary, like whether we don't have some existing tools that could accomplish some of what this is trying to accomplish,” she asked. “I think the government maybe should be doing a bit more work around explaining why. Why are the tools that we already have not being put to use and why are we introducing new legislation?”

For example, under the Ontario Highway Traffic Act, officers may remove a vehicle from the roadway “to ensure orderly movement of traffic” or to “prevent injury or damage to persons or property.” There is also the criminal code, which covers some of the more serious offences such as mischief, harassment, and assault that allegedly took place during some of the anti-vaccine mandate protests.

The Ontario NDP told CTV News Toronto there is not much new in the bill, other than the nearly $96 million in funding meant to support the enforcement measures, including enhanced training through the Ontario Police College, improvements to the “operational strength” of the Ontario Provincial Police and the purchasing of equipment such as tow trucks.

Both the NDP and the Ontario Liberals previously proposed bills that would create “safe zones” that would prevent protesters from gathering around hospitals, schools and daycares. Both were voted down by the Progressive Conservative Party.