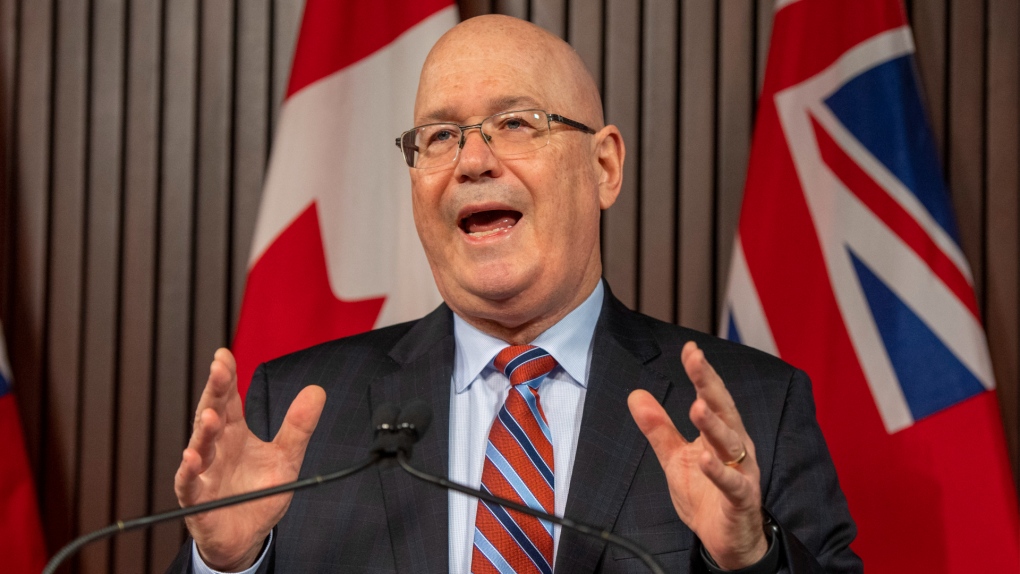 Minister of Municipal Affairs and Housing Steve Clark answers questions after an announcement in the Ontario Legislature, in Toronto, Monday, Dec. 7, 2020. THE CANADIAN PRESS/Frank Gunn

The Ontario government is giving itself the power to appoint regional heads of council for certain municipalities, while also legislating an additional “tool” to help get housing built.

The bill, called the "Better Municipal Governance Act," was tabled in the Legislature Wednesday afternoon.

“The proposed changes support our bold and transformative plan to get 1.5 million homes built in the next 10 years,” Housing Minister Steve Clark said while introducing the bill.

Regional chairs are often either appointed or elected during a general vote or by a vote of elected representatives.

The proposed legislation would allow the minister of municipal affairs and housing to appoint the chairs for the regions of Niagara, Peel and York for the current term of council. Clark confirmed he intends on reappointing the existing chairs—Jim Bradley in Niagara, Nando Iannicca in Peel, and Wayne Emerson in York.

At a news conference, Clark said the province hopes to “draw on their knowledge and their experience.”

“I feel very strongly that we need to have consistency with these three municipalities because of their size and the opportunity to be able to hit our housing targets,” he said.

NDP Housing Critic Jessica Bell called the legislation “an affront to democracy” and said it has nothing to do with building affordable housing.

“Premier (Doug) Ford has given himself powers to handpick Regional Council chairs, changing how regional councils are selected, a few months just a few months after hundreds of thousands of people voted for their local representatives,” Bell told reporters.

“These regional chairs were on track to be elected by councillors. Now Doug Ford has given himself the power to handpick his ‘yes’ men to do his bidding.”

The province will also create “provincially-appointed facilitators” to assess the regional governments of Durham, Halton, Niagara, Peel, Waterloo and York. Clark said the facilitators will determine “the best mix of roles and responsibilities between the upper and lower tier municipalities.”

He also emphasized the goal of the facilitator will be to enable and expand strong mayor powers.

The proposal appears to be well received by some of the municipalities, with Brampton Mayor Patrick Brown voicing his support.

“I am glad the provincial government is looking at ways to make municipalities in Peel more efficient by removing duplication,” he said in a statement. “This will help address the challenges of growth and support the construction of the homes Brampton residents so desperately need.”

"I hope that throughout this process we will streamline the development process and work with the facilitators to find a path forward and I’m very hopeful that will lead us to a single tier municipality, a single tier city for Mississauga.”

Crombie has been vocal about her desire to separate Mississauga from the rest of Peel Region.

Brampton and Mississauga are likely to be included in the next batch of municipalities to receive the strong mayor powers.

The legislation presented Wednesday also allows the mayors of Toronto and Ottawa—the two municipalities that received strong mayor powers this month—to propose and amend bylaws related to provincial priorities and enable council to pass them with a vote of more than one-third of its members.

This means the mayor would not need a majority vote to push their agenda forward.

If council wants to override the mayor’s decision, it needs more than two-thirds of council to agree.

The government has defined provincial priorities as being anything that relates to the building of housing, including construction and maintenance of related infrastructure such as transit and roads.

These priorities could change in the future.

“If something emerges as a provincial priority that we want to include, we'll have to have that conversation with our municipal partners,” Clark said.

Bell said this change, which removes the majority vote, “flies in the face of civic engagement.”

In a statement, Toronto Mayor John Tory's office said he "raised this change with the province" and that he supports the updated strong mayor powers.

"The mayor has been consistent in his support of Strong Mayor powers and he will use these additional measures only when they are necessary to move forward housing and other key priorities," the statement reads. "But he has also been clear that his leadership style and his overall approach to city council won't change. He will continue to work with City Council to get things done for the people of Toronto."

"We raised this change with the province to make sure we can get more housing built as quickly as possible, to avoid NIMBYism, and to help make sure this new system works as efficiently as possible."

Clark acknowledged the proposals released today “are bold” but said they reflect the severity of the housing crisis.

The province is also repealing the Duffins Rouge Agricultural Preserve Act in order to open up more Greenbelt land and “assist in removing barriers to building much-needed housing in Pickering.”