Ontario is extending the deadline for child-care operators to apply for the $10-a-day program and standardizing the process in an attempt to get more providers to sign up.

The Canadian Press has obtained a letter sent Wednesday to municipalities informing them that the deadline is being extended from Sept. 1 to Nov. 1, to allow operators more time to make decisions and ensure more parents can see savings.

Many child-care operators, particularly for-profit ones, have said they want to sign up in order to issue rebates to parents, but are hesitant about the implications to their business, and have expressed concern that each municipality has a different process.

Ontario is now telling municipalities that they have to share an example of a standard agreement with all licensed operators in their region by Aug. 29.

Education Minister Stephen Lecce said after question period Wednesday that he believes the changes will give operators more confidence to apply.

"The extension, the red tape reduction, the streamlining, the certainty of the numbers when it comes to the fiscal impact for next year and beyond -- all of this is what they've asked for," he said.

"I really do believe we will see an increase in participation. What that means for parents at home is savings in the bank. And honestly, when you're paying a mortgage fee for child care, it really becomes inaccessible. There's too many women staying home in this economy because it's cheaper to do so than to work." 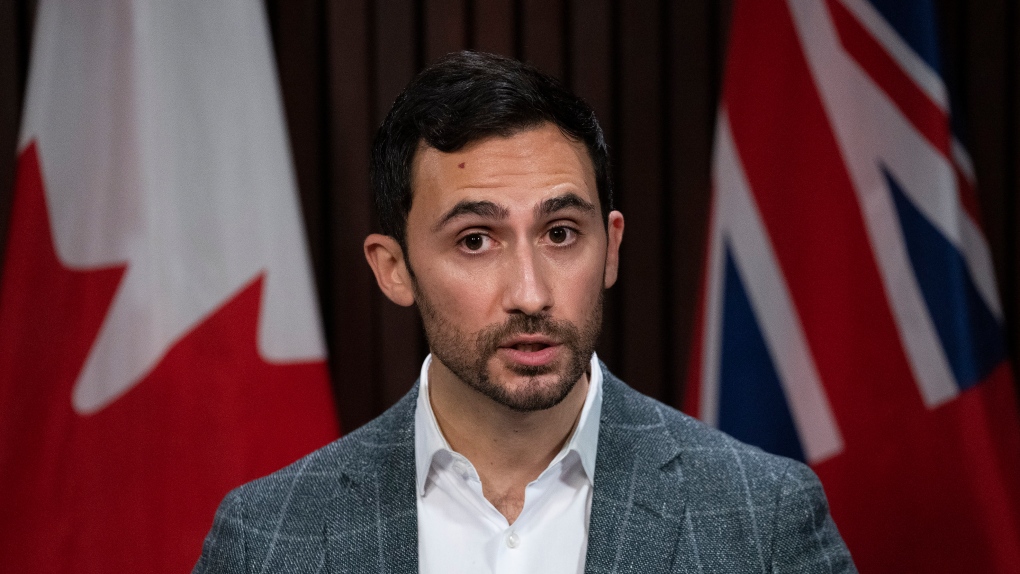 Stephen Lecce, Minister of Education for Ontario makes an announcement in Toronto on Wednesday, January 12, 2022. THE CANADIAN PRESS/Nathan Denette

Sharon Siriboe, the director of the Ontario Association of Independent Childcare Centres and who runs a child-care centre in Peel Region, said the announcement is "huge," because an extension, along with more consistency and transparency in the process are among the changes for-profit centres have been urging.

"Today was a step in the right direction because we feel like at least (Lecce) listened and he heard what we were saying," she said.

Providers who have already opted out will be able to rethink their decision in light of the changes and opt in, if they choose, the government said.

The province also said in the letter that municipalities and operators have to execute an agreement within 30 calendar days of an application, down from 60, and then have to provide parents with rebates within 20 calendar days of the child-care centre receiving the funding.

The government says that despite the extended deadline, parents will still see savings of on average 50 per cent by Dec. 31, as originally scheduled.

Just a few weeks ahead of September, uptake varies widely across municipalities, with some -- particularly smaller areas -- seeing all or nearly all operators apply, while other regions are seeing less than half of operators applying so far.

In Toronto, the largest region, 587 out of a total of 1,042 licensed child-care centres have applied to opt in -- and 32 have opted out -- though the percentage of for-profit operators that have applied is much lower than the non-profits.

York Region has received 240 opt-in applications out of its 557 sites, and 10 have opted out.

In Peel Region, west of Toronto, the majority of operators have expressed interest in joining the program, but some are complaining about the process, which asks them to submit an "expression of interest" before getting details.

Ontario's rollout of the program has differed from other provinces' in part because child care is funded through municipalities, rather than directly by the province, experts say. Some child-care advocates have expressed concern that municipalities were seeming to negotiate agreements centre by centre, rather than have a standard set of terms.

This report by The Canadian Press was first published Aug. 16, 2022.

For those looking to buy an orange shirt ahead of Orange Shirt Day on Sept. 30, Indigenous designers are asking the public to make sure their purchase is actually going towards supporting the cause.

Russia prepares to annex occupied areas of Ukraine despite outcry

Russia is poised to formally annex areas of Ukraine where it has military control after referendums there reportedly endorsed Moscow's rule.

Federal authorities are set to close Canada's borders Wednesday to commercial dogs, including ones being put up for sale or adoption, from more than 100 countries deemed to be at high risk for canine rabies.

Researchers in the U.K. say they've found DNA in sediments near artificial islands in Scotland and Ireland that date back to 4,000 BC, suggesting that these structures were once used by the elites in ancient times.