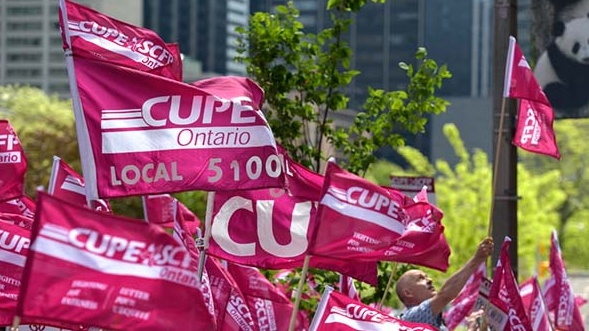 Online voting opened on Nov. 24 and is set to conclude Sunday, exactly two weeks after the union’s central bargaining committee reached a tentative agreement with the provincial government. The deal averted a strike, which was set to get underway on Monday, Nov. 21.

The Canadian Union of Public Employees (CUPE) has scheduled a news conference for 10 a.m. Monday at Queen’s Park.

The union, whose members include custodians, education assistants, early childhood educators, and administrative staff who work in the province’s public, Catholic, English, and French school boards, initially planned to unveil the results on Tuesday.

CUPE officials are recommending members ratify the four-year contract, which has an average wage increase of 3.59 per cent in each year.

The terms of the agreement were mandated into a contract for the workers under Bill 28, the “Keeping Students in Class Act”, which used the notwithstanding clause to make it illegal for workers to go on strike. The province rescinded that bill following two days of protests and a promise to return to talks with the union.

If CUPE members vote to reject the latest deal, both sides could go back to the bargaining table and CUPE could give another strike notice.

“This tentative agreement is our first in 10 years to be freely bargained instead of forced on us with legislative interference,” said Laura Walton, president of CUPE’s Ontario School Boards Council of Unions, in a Dec. 2 release.

“For the last week and a half, frontline education workers have been deciding if what’s in this tentative agreement is acceptable. This – workers having the freedom to negotiate and to withdraw our labour if necessary – is democracy in action.”

Walton, an educational assistant from Belleville, has said she does not like the agreement as it doesn't include new staffing guarantees.

“The biggest beneficiary of this deal is our kids, who are going to have some stability and be able to stay in school,” he said.

“We are grateful to all parties for working with the government. … Kids deserve to be in class and I’m proud to confirm they will be tomorrow.”

Lecce, who would not speak to the specifics of the agreement, said there have been some “incremental wins” for both sides and that “every party leaves the table with something that they wanted to advance.”

“The greatest beneficiary of this deal is our kids who are going to be in school. That's what matters. This is not about unions winning or government winning,” he said, calling the agreement a “material win for working parents.”

Lecce said regardless of the ratification vote outcome, the province government intends to stay at the table and would continue to have “good faith negotiations” with Ontario’s four other key education unions that are currently in contract negotiations.

With files from The Canadian Press and CTV Toronto’s Katherine DeClerq.

What should Canada be doing about climate change? 25 recommendations

The national Net-Zero Advisory Body released 25 recommendations Friday for how Canada can adjust its climate plan to reach net-zero emissions by 2050 — a goal that the country is not on track to reach right now, according to the report.

The federal government posted a budgetary deficit of $3.6 billion in the first eight months of the fiscal year.

What looks like a giant teddy bear’s face peering into space from the surface of Mars is actually a satellite image of some craters and a circular fracture, scientists say.

The Supreme Court of Canada has ruled that a mandatory minimum sentence of four years for firing a gun at a house is unconstitutional.

Conservative Leader Pierre Poilievre doubled down on his belief that "everything feels broken" Friday, as he laced into Prime Minister Justin Trudeau for suggesting otherwise.

Thousands of Maritimers still without power after Thursday storm

Thursday’s wet and windy storm has knocked out power to thousands of people in the Maritimes, most of which are in Nova Scotia.

Freedom rally supporters are expected to congregate near the southern Alberta border town of Coutts on Saturday and RCMP officials say motorists in the area should expect to face highway delays.