Extracurricular activities, sports teams and clubs could once again be offered in Ontario schools this September, as the government moves towards a normalized education experience for students across the province.

Education Minister Stephen Lecce revealed that, in addition to full-time, in-class learning in September, students should be able to participate in modified activities as long as the pandemic continues to be under control in the community.

"Our intention is to restore extracurricular and sport and clubs," Lecce told reporters at a news conference on Tuesday. "There will be adaptations required by public health just to make them safe."

Extracurricular activities were largely sidelined or severely limited last September when students returned to the classroom after the first wave of COVID-19. As Ontario battled the second and third waves of the pandemic, however, in-class learning was disrupted, before being cancelled altogether along with any in-school activities.

Now, as the province and public health officials prepare to re-open schools to students in the fall, Lecce says the province wants to create a safe, yet positive learning experience.

"It's those extracurricular, volunteering and leadership development experiences, it's the sports that provide physical activity that's helpful for children," Lecce said, noting that the mental health of students is a key part of the back-to-school plan. 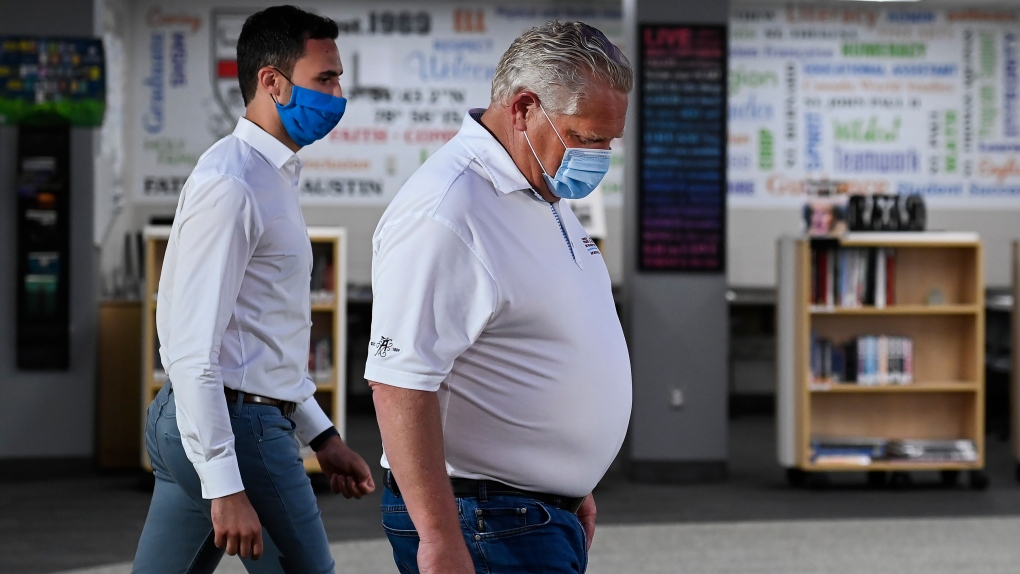 Ontario Premier Doug Ford, right, and Education Minister Stephen Lecce get ready to make an announcement regarding the governments plan for a safe reopening of schools in the fall due to the COVID-19 pandemic at Father Leo J Austin Catholic Secondary School in Whitby, Ont., on Thursday, July 30, 2020. THE CANADIAN PRESS/Nathan Denette

What normal looks like, the minister said, depends on the vaccine uptake among eligible children and teens before September -- currently, nearly 60 per cent of children aged 12 to 17 have been partially immunized while roughly 11 per cent have been double vaccinated.

That led to a "call for arms" from the province's Chief Medical Officer of Health Dr. Kieran Moore who warned that students have just nine weeks remaining before schools resume, and require two weeks for their immunity to kick in once they receive a shot.

"We want them to enjoy their sports, music, theatre and social events, and for that to occur safely we need a very high level of immunization," Moore said.

While Moore didn't reveal whether the province has set a vaccination threshold for school activities to resume, other public health officials say the government would need to dramatically boost its numbers among children.

"The province would, ideally, want at least 80 per cent of youth vaccinated," said Dr. Charles Gardner, the Chair of the Council of Medical Officers of Health.

Dr. Gardner cautioned, however, that the province still needs to examine the state of the situation in the fall before a full resumption of school activities

"The question about cohorts, masking and physical distancing ... will remain relevant at least at the very beginning to see how things go before you can look at to what degree you have been successful and we can back away from some of those measures," Dr. Gardner said.

The Ontario NDP claimed the government isn't taking action to ensure the safety of schools and argues there should be a "massive effort" during the summer months to hire additional educators to ensure smaller class sizes, and to install improved ventilation in classrooms.

The party also called for an end to the hybrid learning model which saw students switch between in-class and online learning during the last school year.

Lecce said parents have "overwhelmingly" told school boards they want students to return to the in-class setting which is, in part, driving the province's push to reopen schools in September.

Lecce said the plan for schools will be made public "in a few weeks."