TORONTO -- Ontario health officials have said that without a “significant reductions in contacts,” the provincial health system will be overwhelmed amid a rising number of COVID-19 infections and mortality will exceed the first wave totals, even with their vaccination efforts.

In modelling data released late Tuesday morning, officials said they expect the daily COVID-19 mortality rate in the province to double from 50 deaths per day to about 100 deaths per day between mid-January and the end of February.

The predictions represent an increase from the previous data released in December, which suggested that under the “maximum likelihood estimate” Ontario would see a little under 50 deaths daily by next month.

Speaking at a news conference on Tuesday, Epidemiologist and Co-Chair of the province’s COVID-19 science table Dr. Adalsteinn Brown said the new data indicates the novel coronavirus could be in competition for the single greatest cause of mortality on a daily basis.”

“Potentially larger than cancer and heart disease, it's already larger than virtually every other cause that we look at,” he said.

Officials also predicted that if the rate of infections grows by one per cent, Ontario hospital intensive care units could see occupancy related to COVID-19 jump to 500.

If the rate of infections grows to three per cent, officials say ICU COVID-19 occupancy could soar over 1,000. The government said this could occur in “more severe, but realistic scenarios.”

Ontario is currently reporting a COVID-19 infection growth rate of 1.2.

The government has previously said that once the number of COVID-19 patients in the ICU exceeds 300, it becomes nearly impossible for health-care workers to provide care not related to the disease.

As it stands now, there are more than 400 people being treated in the ICU for COVID-19. Officials said Tuesday that one quarter of hospitals in Ontario have no ICU beds free, while another quarter only have a handful of beds available. 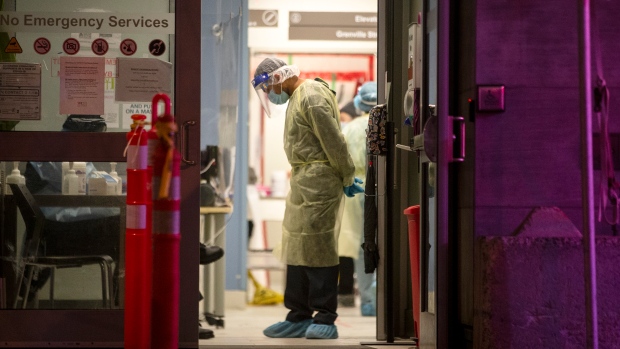 Hospitalizations due to COVID-19 have increased by 72.1 per cent over the last four weeks, officials said, while the number of patients in the ICU has increased by 61.2 per cent.

"I want to be clear, the impact on our health system is already greater today than we've ever seen in Ontario's history,” Brown said.

“If we look at just one community as an example, Scarborough has already had many times more emergency department visits and hospital admissions, and in an entire bad flu season, and we're now only a few months into this second wave.”

Brown added that as the number of COVID-19 patients in intensive care grows, doctors will have to make choices “no family ever wants to hear.”

"The choices will affect all patients needing intensive care, whether it is patients who have a heart attack, who have been in a motor-vehicle accident, who have COVID-19 or any other cause. This also means care for thousands of patients waiting for surgery will be delayed or cancelled while we add more patients to this wait list.”

In Ontario’s long-term care homes, the situation appears to be just as dire.

Since Jan. 1, at least 198 long-term care home residents have died of COVID-19, as well as two staff members.

Under the government’s worst-case scenario, the province could see the total long-term care death toll in the second wave surpass 2,500 by February. There were about 1,815 deaths in long-term care homes reported in the first wave of the pandemic, officials said.

According to the modelling data, 252 long-term care homes—40 per cent of all facilities in Ontario—are experiencing an outbreak of COVID-19.

Thirty-seven of those homes are located in “priority vaccination areas,” which includes Toronto, Peel Region, York Region and Windsor-Essex. These four areas were the first regions in the province to be placed under a lockdown order in the second wave of the pandemic.

Multiple variants of COVID-19 being seen in Ontario

As of Tuesday, Ontario officials say there are now 14 cases of a COVID-19 variant that was first discovered in the U.K. in the province.

The variant, officially known as Novel-SARS-CoV-2: B117, appears to be much more easily transmittable, although officials say there is no increase in symptom severity among those who contract it.

According to the modelling, if the COVID-19 variant spreads in the community, the number of infections in Ontario could start doubling every 10 days by March. 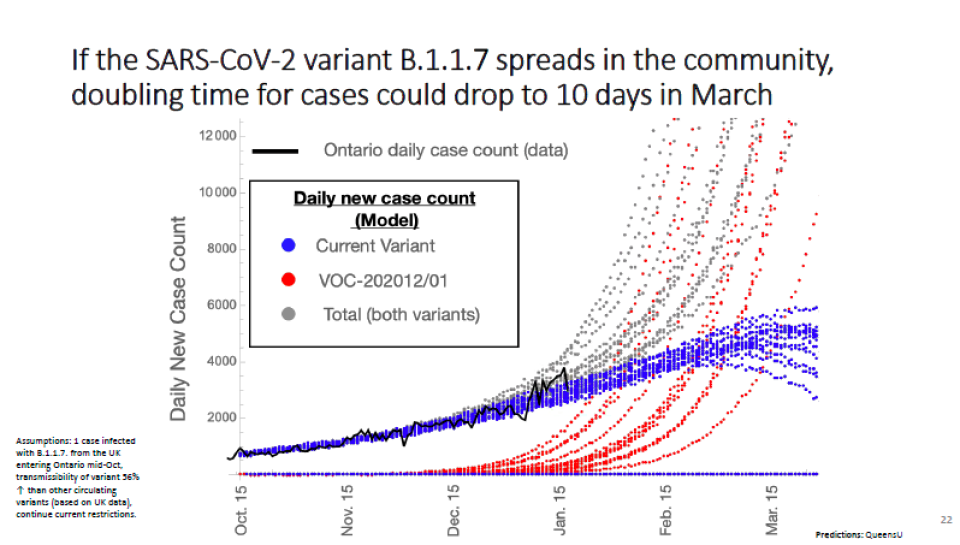 Ontario Associate Medical Officer of Health Dr. Barbara Yaffe said that while they believe the COVID-19 vaccine will be effective against the new variant, it will still take too long to establish a herd immunity against it.

“We believe in order to get what we call herd immunity, we probably need 60 to 70 per cent of the general population vaccinated. That won't happen for many months,” she said.

“The variant is already here. The data shows, as Dr. Brown indicated, it's probably at least 56 per cent more transmissible. And at this point, as I said, three of our cases we don't have a travel history. If that is confirmed, we have evidence of community transmission and that is a very serious concern that the vaccine will not be able to address quickly enough.”

The modelling also forecasted that if the number of infections continues at a growth rate of one per cent, the province could see more than 5,000 COVID-19 cases daily by the end of February. That number increases to about 10,000 cases if the infection rate is three per cent.

Brown indicated that it is “quite possible” for the growth rate to increase to about five per cent, with about 20,000 daily cases per day by the middle of February.

The modelling also showed that despite the province’s lockdown efforts, there was a pre-holiday spike in mobility across Ontario.

Mobility data provided by the province shows a sharp spike in movement in retail before the Christmas holiday.

The government launched a province-wide lockdown on Boxing Day, Dec. 26, which shuttered non-essential businesses and malls while also prohibiting in-person dining at bars and restaurants. While some regions, such as Toronto, were in lockdown as of mid-November, other adjacent areas were not. 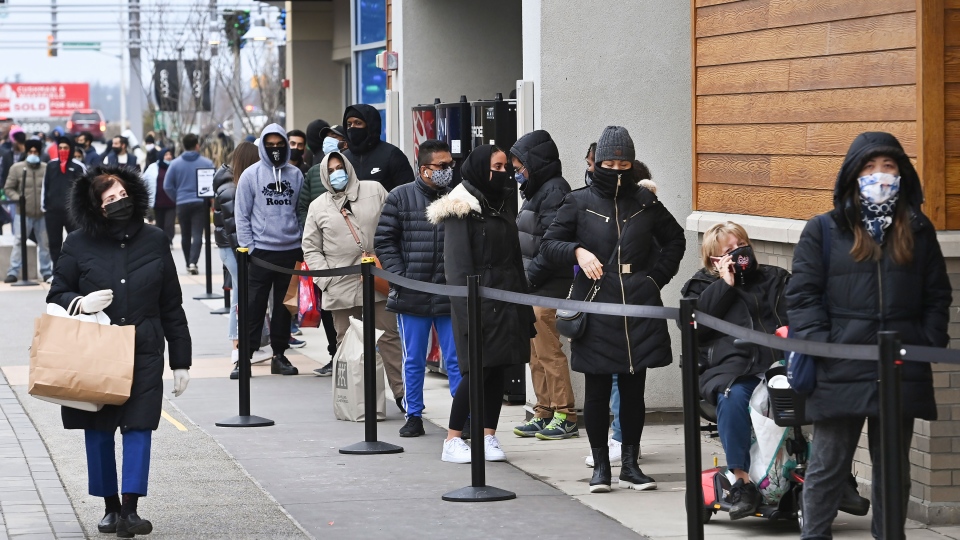 The modelling data shows that the lockdown, or “grey zone” restrictions, put in place by the province at that time did not affect the proportion of people working from home or stop people from gathering.

Moreover, officials say that while roughly two-thirds of the population are “acting in a way that will decrease COVID-19 spread,” the data also indicated that about 32 per cent of people had three or more visitors over to their homes in the last four weeks.

“I think people are tired,” Yaffe said. “It's been a long time, we're all tired, we're all fed up, we want this thing to go away.”

“People were out and about in the summer and despite going into a shutdown in the grey zones, people were still moving about. They were going to adjacent regions to go shopping.”

“I think what it shows is that the shutdown was not enough. We need we need more stringent measures. The data is showing we're in a very dangerous situation now.”

The modelling was released just a few hours before the Ontario government declared a second state of emergency and issued a stay-at-home order in an effort to curb the spread of the disease.