Deaths related to COVID-19 in Ontario will increase and ICU admission expected to soar, modelling suggests

TORONTO -- Ontario health officials are forecasting an increase in COVID-19-related deaths heading into the new year, while the number of patients with the disease in intensive care units (ICU) in the province is expected to surpass the 300-bed benchmark within the next 10 days.

In new modelling data released late Monday morning, officials said that regardless of the scenario, occupancy in Ontario’s ICUs will be above 300 by the new year. In the worst-case scenario, COVID-19 patient occupancy could surpass 1,500 by mid-January.

The government has previously said that when more than 300 COVID-19 patients are in the ICU, medical care not related to the disease becomes nearly impossible to handle.

“This is the second of the thresholds that we discussed earlier in the year,” Dr. Adalsteinn Brown, co-chair of the province’s COVID-19 science table, said at a news conference.

“This means that we will see cancellations of surgery, we will see reductions in access to necessary care and we will see the risk of delayed access to intensive care unit care for people who clearly need it immediately under any of these scenarios.”

As of Monday, there are more than 900 people being treated for COVID-19 in Ontario hospitals, with at least 265 of those patients being cared for in the ICU. More than 150 of those ICU patients are breathing with the assistance of a ventilator.

Over the past four weeks, hospitalizations due to the novel coronavirus have increased by about 69.3 per cent, the modelling said, and there has been an 83.1 per cent increase in ICU COVID-19 admissions in that same time period.

Officials also said that “daily mortality is increasing and based on forecasting will continue to increase.”

The “maximum likelihood estimate” presented in the modelling suggests a little under 50 deaths daily by February and surpass 50 by mid-month. 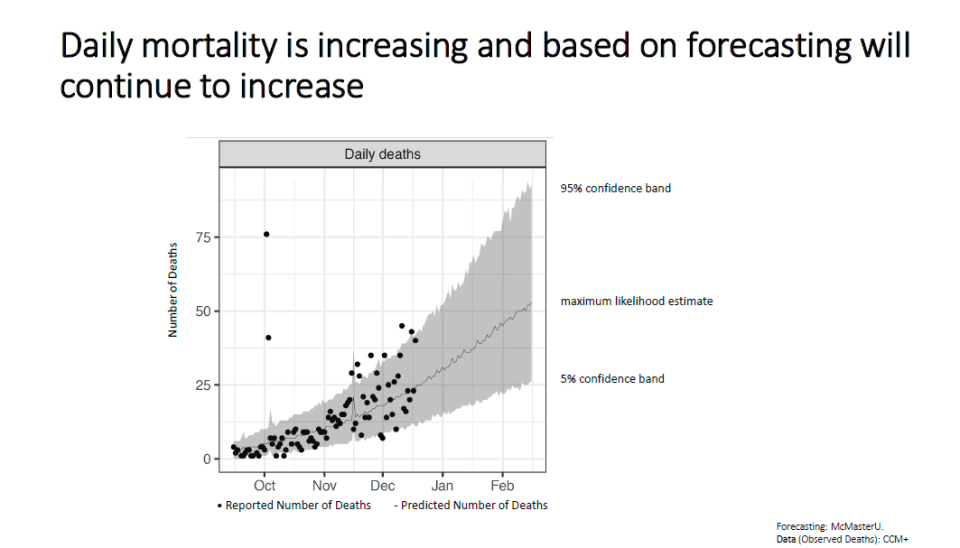 The modelling also forecasted that if the number of infections grew at a rate of three per cent, the province could see more than 5,000 COVID-19 cases daily by the end of January. That number drastically increases to between 10,000 and 15,000 with a five per cent growth rate and jumps to 30,000 daily cases with a growth rate of seven per cent.

“The death rate (for COVID-19) is about five times as high with significantly greater risk of ICU care and ventilation when in the intensive care unit,” Brown said, referring to a report on the first wave of the pandemic.

“So this is not to be confused with just a wave of flu. This is a different disease with very different health consequences.”

Since the beginning of the pandemic, more than 2,400 long-term care residents have died after contracting COVID-19.

One hundred and forty-five long-term care homes are currently experiencing an outbreak of the disease.

“It's also important to understand that the spread throughout the community has a significant impact on our long term care homes,” Brown added.

According to the data, about 83 per cent of COVID-19 deaths in long-term care homes during the second wave of the pandemic has occurred since Nov. 1.

The data indicated that “hard lockdowns” for four to six weeks could reduce the number of daily-reported COVID-19 infections in Ontario to less than 1,000.

Ontario Premier Doug Ford has announced a province-wide lockdown in an attempt to curb the spread of the disease. 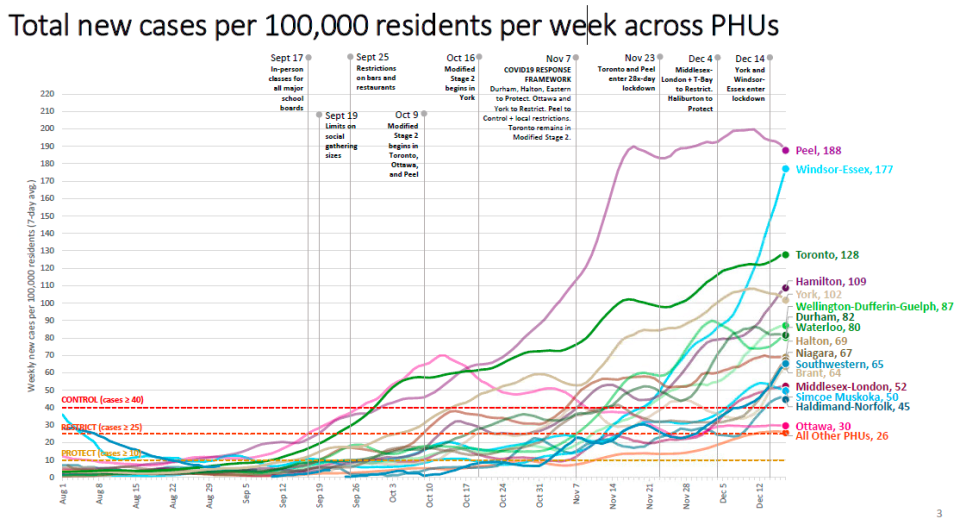 Speaking a few hours after the modelling data was released, the premier said there will be a 28-day lockdown for all of southern and eastern Ontario, while northern Ontario will be in a 14-day lockdown.

Under these restrictions, there will be an extended winter break for students in southern Ontario. Elementary school students will remain at home until Jan. 11 while secondary schools will be closed to in-person learning until Jan. 25.

At the same time, Brown said that anything less than a four-week, or 28-day, lockdown won’t result in enough of a decrease in COVID-19 cases.

“We don’t believe anything less than four weeks will be effective,” Brown said. “Six weeks gives a significant added likely reduction in case numbers. They won’t start coming down right at the beginning of the lockdown.”

Dr. Brown said that starting lockdowns earlier have the potential to reduce cases faster. For example, if a lockdown were to start on Dec. 21, “it plays out significant reductions of cases under almost any scenario.”

According to the data, the majority of southern Ontario now has a more than 40 cases of COVID-19 per 100,000 residents, a measurement used to place a region into the province’s “red” zone, just before a lockdown.

Officials said that while the positivity rate appears to be flattening in Ontario, partially due to an increase in testing across the province, the ability “to control case growth is still precarious.”

The total number of lab-confirmed cases of COVID-19 in Ontario now stands at 158,053, including deaths and recoveries.