TORONTO -- An Ontario couple who lived in Nova Scotia after recently retiring are presumed dead after a mass shooter went on a deadly rampage and set their house on fire.

The two sons of Dawn and Frank Gulenchyn, Jon and Ryan Farrington, said Monday they have little hope their mother and step-father will be found alive and have been asked to provide DNA samples to authorities.

Gunfire erupted on Saturday night in Portapique, Nova Scotia and continued until Sunday, with officials saying the gunman had travelled more than 150 kilometres along rural roads and highways, killing at least 18 victims and setting property and police vehicles on fire.

The suspect was eventually found 12 hours after the shooting began at a gas station about 90 kilometres away from Portapique. He was fatally shot.

"It's been a nightmare. It’s like a really bad dream and you can’t wake up," Ryan Farrington told CTV News.

"So far the RCMP have confirmed the house my parents lived in has been burnt to the ground. They also confirmed that prior to that, witnesses heard two gunshots before the house was set ablaze."

"They are going through the scene trying to find the bodies."

Ryan Farrington said he woke up Sunday and saw a post online about the mass shooting and knew it was on the road his mother and step-father lived on.

"I immediately sent both them a text, after a couple minutes of no response I tried calling and it went right to voicemail. Then I sent a message through Facebook and it didn’t go through. It was at that point I knew that things weren’t going to turn out well."

Jon Farrington, Ryan’s brother, said they are now waiting for police to confirm they have recovered their parents’ bodies.

"When I spoke to the officer today they did verify that my parents’ vehicle was still in the driveway," Jon Farrington said. "So they didn’t drive away. We've contacted numerous hospitals … It's hard to have any hope at this point."

The brothers said their mother, who worked at Hillsdale Terraces long-term care home until last year, had recently moved out to Nova Scotia after retiring.

"She was able to retire last July and move down there,” Ryan Farrington said. “They were both the sweetest people in the world. They would do anything to help anybody out." 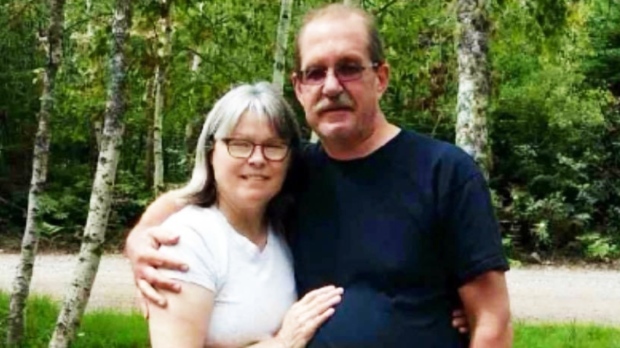 "They were our best friends. We didn’t go a day without talking or texting."

"I still can't believe it’s true. I would have never thought this could happen to our family."

Durham Region issued a statement on Monday saying it was mourning the couple.

"Our hearts go out to their family and all families affected by this senseless tragedy," the statement reads. "As a nation, we are united in these moments of sorrow and grief. We can never understand these senseless acts of violence. But, we hope these communities can find comfort and support in the nation that stands behind them."

Officials said on Monday that all of the victims were adult and that some were known to the gunman, while others were not.

The shooting is the worst mass killing in modern Canadian history.

Why was no emergency alert issued during the rampage in Nova Scotia?

'Nova Scotia needed this': Stunning sunset a bright light at the end of a dark day

Condolences pour in from around the world for victims of N.S. mass killing

What we know about the Nova Scotia rampage suspect

Son fears worst after not hearing from parents since night of N.S. shooting

A timeline of events in the deadly Nova Scotia rampage