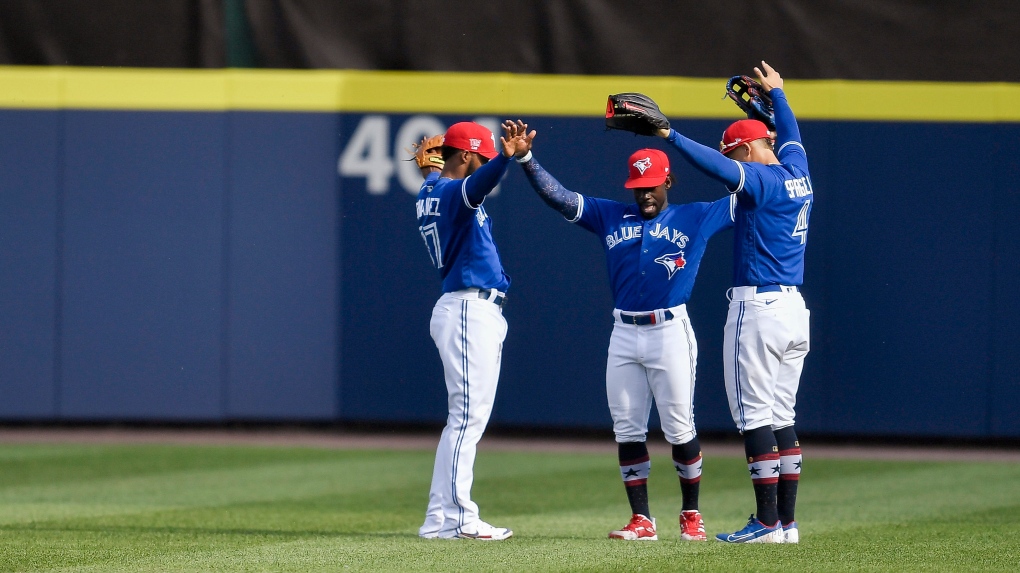 TORONTO -- Ontario's sports minister has asked the federal government to allow the Toronto Blue Jays to play in Canada.

Lisa MacLeod said in a letter sent to her federal counterpart, Steven Guilbeault, on Friday that the Ontario government supports the Blue Jays playing at Rogers Centre in downtown Toronto.

MacLeod noted that in Step 3 of Ontario's recovery plan, the Jays would be able to play with limited spectators at Rogers Centre.

"Fans have been eagerly anticipating the return of the Blue Jays to their home field, where they have not played since the 2019 season,'' said MacLeod in the letter acquired by The Canadian Press. "After nearly two years away, the Blue Jays have signalled they are ready to come home.''

Although the domed Rogers Centre has a retractable roof, it qualifies as an outdoor venue under the provincial regulations. Ontario entered Step 3 on just after midnight on Friday, loosening a number of COVID-19 regulations, including allowing fitness facilities, cinemas, indoor dining, museums and other venues to reopen after a months-long shutdown.

As of Friday, 79 per cent of adult Ontarians had at least one COVID-19 vaccine dose and 60 per cent were fully vaccinated.

"Over the past several weeks, Ontarians have been stepping up to the plate to be vaccinated and surpassing vaccination targets, contributing to steady improvements in public health and health care indicators in the province,'' said MacLeod.

Federal co-operation is necessary to let the Blue Jays and their opponents to cross the border with the United States as part of Major League Baseball's schedule.

Canada's deputy chief public health officer said Thursday that the Blue Jays' return to Canadian soil is "trending in a very good direction,'' but did not give a firm date for a decision.

Dr. Howard Njoo said there had been "a lot of good back-and-forth'' between the franchise and the government over the team's application for a so-called "National Interest Exemption'' to Canada's COVID-19 travel restrictions.

"We're looking at, I would say, last details. But at this point I would say there aren't any showstoppers or anything that we really can't continue to discuss and move forward on,'' said Njoo.

"So I can't give you a date in terms of when a possible decision would be made for the NIE or national interest exemption, but I would say that in terms of the discussions from a public health perspective, they've been going very well.''

Although the Canadian government allowed the Blue Jays to host their summer training camp in Toronto last July before the shortened 2020 season, a request to play regular-season games north of the border was denied.

This season, the Blue Jays started play at their spring training facility in Dunedin, Fla., before returning to Buffalo's Sahlen Field on June 1.

The Blue Jays returned from the all-star break on Friday, when they start a three-game series with the Texas Rangers in Buffalo.

The Jays open a three-game home series with visiting Kansas City on July 30. The venue is not listed on Major League Baseball's website.

The Canadian government gave the NHL a travel exemption for the final two rounds of the Stanley Cup playoffs and recently approved a plan that allowed CFL players and staff to return to Canada without undergoing a full 14-day quarantine.

This report by The Canadian Press was first published July 16, 2021.