City officials are removing graffiti found on a cenotaph just outside Old City Hall the morning after Remembrance Day.

On Tuesday morning, the words “ye broke faith” and "with us" were seen spray-painted on two sides of the monument.

The words appear to reference the line, "If ye break faith with us who die," from John McCrae's poem "In Flanders Fields." 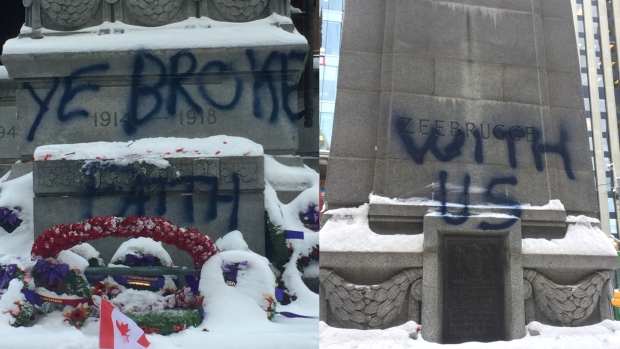 Investigators confirmed they received a call regarding the vandalism at 7 a.m.

Around the noon hour, officials could be seen power washing the cenotaph to remove the paint.

“You have to ask yourself what kind of person would do this kind of thing any day of the year, especially on the day after Remembrance Day when you had thousands of people place poppies here in somber and solemn remembrance of those who served us,” he said.

“The good news side of this ... whatever idiot did this, used a bad kind of paint. The cold weather, if you want to look for a silver lining in cold weather, helped and its coming off with no damage, it would seem, to the monument.”

Tory said that he hopes the monument will be "as good as new" in a day or two. 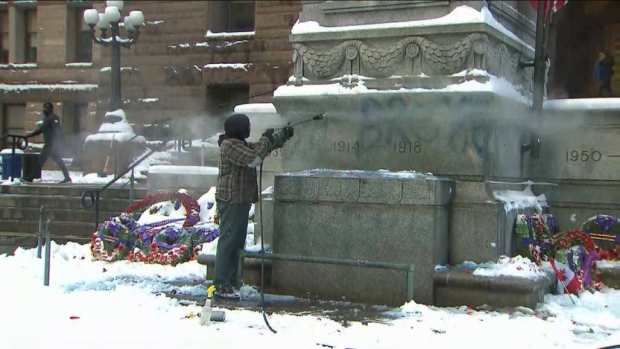 A small group of Toronto police officers joined crews Tuesday afternoon to help clean the cenotaph and move the Remembrance Day wreaths out of the way of the powerwasher.

"We thought we would come down and at least come down and help clean this up because it’s a disgrace and we are going to show that we are not going to stand for it," said Sgt. Rob Mcdougall with Toronto Police's 52 Division said.

On Monday morning, a Remembrance Day ceremony was held to honour fallen soldiers of the First World War and hundreds of people were in attendance. Wreaths and flags remained outside the historic building, located at Bay and Queen streets, the day after and are seen in the images capturing the spray-painted words.

The matter is under investigation, police said.

No further information has been provided by officials thus far.

Ontario Premier Doug Ford commented on the matter on Twitter.

Disgusting to see a monument to our heroic veterans disrespected by this shameful act of vandalism. I trust our police to find whoever is responsible and bring them to justice. https://t.co/qzv6GcoOj2