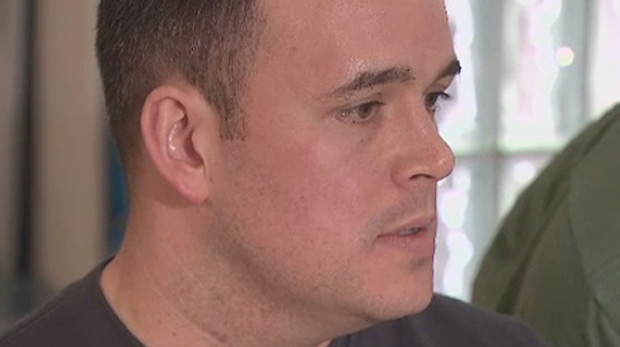 Sgt. Paul Gauthier is shown in a undated image from CTV Toronto footage.

A Toronto police officer facing disciplinary charges related to the 2016 arrest of Bruce McArthur penned a letter to his colleagues stating he is being used as a “scapegoat” by the service, which has faced harsh criticism over the handling of the investigation into the now-convicted serial killer.

“The past year has taken a tremendous toll on me, both personally and professionally,” Sgt. Paul Gauthier said in the letter obtained by CP24 on Wednesday. “There have been many sleepless nights thinking about McArthur’s unspeakable crimes, his victims and their families, and the fact that my employer has effectively set me up to be their fall guy for all of this.”

McArthur pleaded guilty to eight counts of first-degree murder in the deaths of Andrew Kinsman, Selim Esen, Majeed Kayhan, Soroush Mahmudi, Dean Lisowick, Skandaraj Navaratnam, Abdulbasir Faizi and Kirushna Kumar Kanagaratnam. The men were murdered by McArthur between 2010 and 2017. All eight of the victims had ties to Toronto’s gay village.

Back in 2016, McArthur was arrested after a man phoned 911 claiming he had escaped from the 67-year-old’s van.

During McArthur’s sentencing hearing for first-degree murder on Monday, an agreed statement of facts read in court said the two knew each other and had agreed to meet in the van. The court heard McArthur told the man to lie down on a fur coat in the back of the van on top of a plastic sheet. McArthur then grabbed the man’s throat and started strangling him, the court heard.

The man was able to roll free and escape, the court heard, before reporting the attack.

McArthur provided a statement to police and ultimately no charges were laid against him in connection with this investigation.

In the letter written by Gauthier, he told his colleagues that he took down the victim’s statement and was “satisfied with it” at the time.

Gauthier added that he showed both the victim’s statement and McArthur’s statement to another officer to “identify any possible inconsistencies.”

“A proper investigation was completed,” Gauthier said in the letter. “Based on years of investigative experience, I didn’t believe there were grounds to charge McArthur with an offence.”

Gauthier said McArthur was released after the probe was reviewed by his supervisor, the on-duty staff sergeant.

“Contrary to certain media reports that have gone out there, the required supplementary report was completed and available to all Toronto police officers to access via a simple name search,” he said in the letter.

Gauthier said he spoke with one of the investigators working on Project Prism on Sept. 6, 2017.

“Nobody appeared to have any concerns with how I handled my investigation,” he said.

In December 2017, Chief Mark Saunders held a news conference where he said he had no reason to believe that a serial killer was operating in Toronto’s gay village.

One month later, McArthur faced his first murder charges and it was revealed that he had been on officers’ radar since as early as October 2017.

While facing criticism for his comments at the news conference, Saunders said the statement he made in December was based on the evidence he and the service had at the time.

Then, in March 2018, an internal investigation was launched by the Toronto police’s professional standards unit into the 2016 arrest of the self-employed landscaper.

The review was sparked by the detective leading the McArthur investigation, then-Det. Sgt. Hank Idsinga, saying he came across some “concerning” information while he was reviewing two previous investigations into five missing men from the city’s gay village.

However, Gauthier’s lawyer Lawrence Gridin is arguing his client’s investigation in 2016 actually helped investigators identify McArthur as a serial killer and noted that Saunders was the one who publicly downplayed rumours of a serial killer in the city’s gay village.

Gauthier was scheduled to make his first appearance on insubordination and neglect of duty charges on Tuesday, but was not present at the hearing before the police tribunal. Gridin told CP24 on Tuesday that the charges stem from Gauthier allegedly neglecting to video record the victim’s statement and failing to take photographs of the injury within 72 hours of the event. Details of the allegations were not released at the time of the hearing and charges were not formally laid.

At the hearing, Gridin argued to have his client’s case heard by a judge rather than a police superintendent assigned by Saunders.

In his letter, Gauthier told his colleagues that he has sought professional help as he was diagnosed with depression and post-traumatic stress disorder since learning about the disciplinary charges.

Gauthier said despite the toll this situation has taken on him mentally, he is “looking forward to defending these charges and having the entire truth come out.”

When asked for comment regarding Gauthier’s letter, Toronto police spokesperson Meaghan Gray said “the matter involving Gauthier followed a standard internal investigative process. It will now be considered before the tribunal and, as such, we will not comment further.”

Gauthier’s case has been adjourned to Feb. 26.

A sentencing decision in McArthur’s murder case is expected to be made on Friday morning.