Office workers are returning to Toronto but foot traffic on Mondays and Fridays hasn’t bounced back. Will it ever?

Office workers are returning to Toronto but foot traffic on Mondays and Fridays hasn’t bounced back. Will it ever?

More people are commuting to offices downtown than at any point since the onset of the COVID-19 pandemic but the recovery hasn’t been equal across the board, with both GO Transit and the TTC reporting fluctuations in ridership as many workers choose to work from home at the beginning and end of each week.

It’s a phenomenon borne out of the popular hybrid model, wherein many employees are increasingly spending part of their weeks working remotely and the other part working from an office.

But if the trend persists it could spell trouble for cities, especially ones with large transit systems that are set up to carry workers to the core at the beginning and end of each day.

It’s also bad news for small businesses, most of whom were counting on a more fulsome return of workers than the one that has materialized so far.

“It isn’t just about people’s personal preferences, it isn’t just about company policies, it is about the spin-off effect that has,” Mayor John Tory told reporters at the Collision tech conference this week, where the future of work was a major topic. “In Toronto, at the moment people are, not surprisingly perhaps, picking to work Tuesdays, Wednesdays and Thursdays (in their offices) and not Mondays and Fridays. But for us running a transit system if you are dealing with two days in which very few people come to work that has profound financial impact. It also has a profound impact on the city.”

At one point during the pandemic office occupancy in the Financial District was at approximately five per cent of 2019 levels.

But it has slowly sprung back to life, as public health restrictions have been lifted and some sense of normalcy has returned to the city.

The latest data from the Strategic Regional Research Alliance suggests that occupancy in downtown Toronto workplaces is now back up to about 25 per cent, with about four of 10 workers going in at least once a week.

The think tank says that it expects occupancy to continue to rebound and reach 30 per cent of pre-pandemic levels by August. But it warns that employers believe that “organizing the workplace in the same fashion as the pre-pandemic workplace is highly unlikely in the future.” 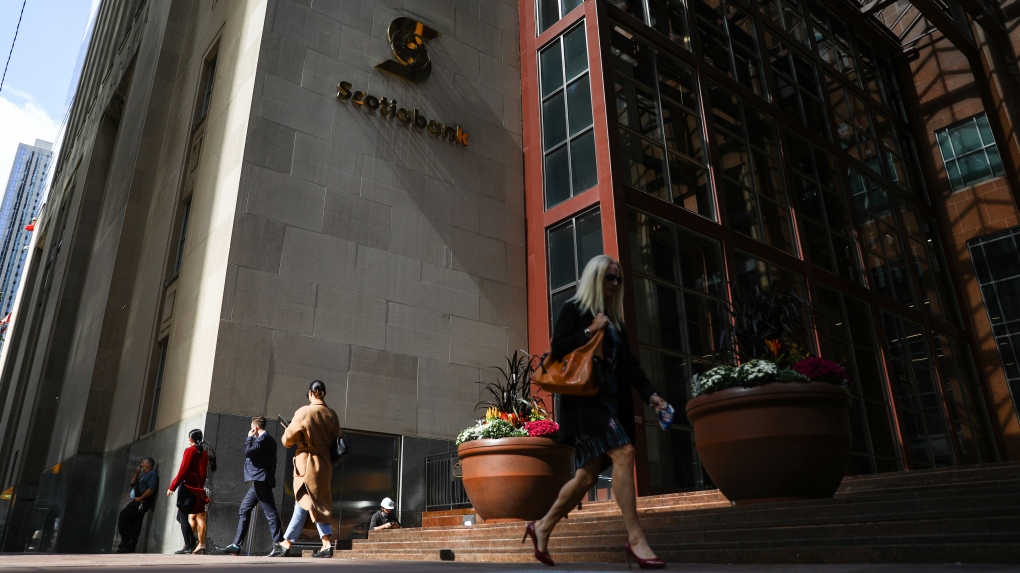 Pedestrians walk past Scotia Plaza in the financial district in Toronto on Wednesday, September 29, 2021. THE CANADIAN PRESS/Evan Buhler

Speaking with CP24.com this week, Toronto Region Board of Trade President and CEO Jan De Silva conceded that there is plenty of anecdotal evidence to suggest that office workers have been slower to return on Mondays and Fridays. But she said her hope is that the trend will prove fleeting, as the revival of “something more akin to the five-day work week” is “critical” to the future success of downtown Toronto.

“We've got so many small businesses in the downtown core, about 17,000 small businesses, for whom that daytime worker is their customer base,” she said. “I think the important thing to look at is not just a single moment in time, though. It is to look at whether we've got momentum in the right direction. And certainly what we're hearing from businesses is that they've got increasing numbers of customers coming back, several of them have even indicated that they're back to levels that they were before and we've seen a lot of new restaurant outlets in food courts and new venues opening up again. That is not to say there may not be some issues here that we need to pay attention to. But everything we're seeing at the moment is suggesting that we're getting back on track.”

De Silva said that the slow return of workers downtown is perhaps not surprising given that Toronto had some of “the longest lockdowns of any place in North America” and the “nature of many of the jobs in the Financial District lent themselves to work from home.”

As a point of comparison occupancy in the city’s second largest employment zone around Pearson International Airport declined to about 63 per cent of 2019 levels at the height of the pandemic but recovered “almost immediately,” according to De Silva.

Looking ahead, De Silva envisions most of the 118,000 employees that work for companies in Financial District high-rises eventually returning to their offices on a more permanent basis as well, perhaps as soon as the fourth quarter of this year or the first quarter of 2023.

“I would say what we're hearing from our members is they're certainly monitoring this closely. We have not seen any movement to release any real estate in response and I don't think there's a sentiment at this point in time that this is going to be a permanent condition,” she said. “Our best guess at this point in time is it's going to be something that will correct itself over time. We can't say it'll be five days a week for everyone 100 per cent of the time at date X but we do think it's going to be an increasing return to office scenario.”

Transit ridership has been slow to rebound on weekdays

As Toronto transitions to a new reality post-pandemic, perhaps with a more permanent shift to flexible work arrangements, transit operators are already seeing some strange quirks in ridership.

TTC spokesperson Stuart Green told CP24.com that May’s data pointed to lower ridership “across the board “on Mondays, though it was “fairly evenly distributed” on other days.

Meanwhile, at GO Transit, spokesperson Anne Marie Aikins said that the agency is already back to about 90 per cent of its pre-pandemic ridership on weekends.

GO Transit, however, continues to see much lower ridership on weekdays compared to the pre-pandemic norm, currently around 50 per cent of 2019 levels.

“It is difficult to tell what the pattern is going to be but certainly I can see that Mondays and Fridays, it is quieter, especially Fridays,” Aikins said. “Every week the ridership changes. It is not like we have these months and months of this ridership and a pattern has solidly developed. 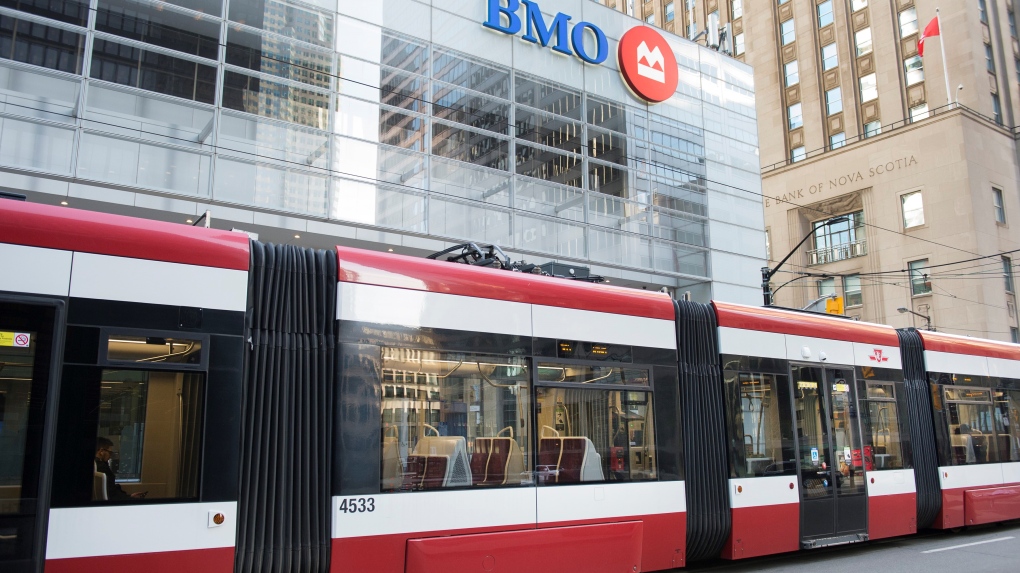 Aikins said that GO transit has only restored about 75 per cent of its weekday train service so far and is planning to scale up service again in the fall should there be a more significant return of office workers to the core.

At the same time, she said that the transit agency is experimenting with things like its fare structure in recognition of the fact that many people aren’t working downtown five days a week and may no longer benefit from some of the discounts GO previously provided to riders who took the train more than 36 times a month.

It is also adding GO bus routes to a number of popular attractions this summer, as it seeks to capitalize on a more complete return of leisure travellers.

“You have to make sure that you really figure out the pattern and what is sticking. You know, we have never been in this position before, planning transit for after a pandemic. So it is difficult to tell where things are going to go and you do have to keep adjusting,” she said.

The effort to bring back workers to the core has been underway for months now, with all of the City of Toronto’s employees being required to spend at least part of their work week in the office since March.

The Ontario Public Service has also required its workers to be in the office one to two days per week since April, as part of what it calls a “temporary hybrid model.”

However, most employers whose workforces switched to remote during the pandemic are not insisting on a full-time return to the office at this point and it is unclear whether they ever will.

In a statement provided to CP24, Toronto Financial District BIA Executive Director Grant Humes said that “both offices and retailers are welcoming back larger groups of people every day in the Financial District.”

But he did concede that there is some “fluctuation” in foot traffic, largely as a result of “hybrid work schedules.”

For his part, Tory announced this week that he would appoint a panel of accomplished leaders to help provide “real-time advice” about the city’s economic recovery and the future of work, noting that it is a “very profound question with potentially very profound consequences” for the city.

But, at least for the time being, business leaders are taking a wait-and-see approach before jumping to any conclusions about the Monday and Friday lull becoming a permanent fixture in Toronto’s post-pandemic reality.

“The good weather is certainly helping absolutely for the Tuesday to Thursday crowd and we'll just see how the balance of the summer progresses,” De Silva told CP24.com “By the fall, I know a lot of our large employers are anticipating seeing something more akin to five day a week. Not that they're going to make it mandatory but more think that’s where the mindset of our workers are going to be about being in that office setting.”

Tom Brady is taking some time away from the Tampa Bay Buccaneers to 'deal with personal things,' according to the team's head coach Todd Bowles.