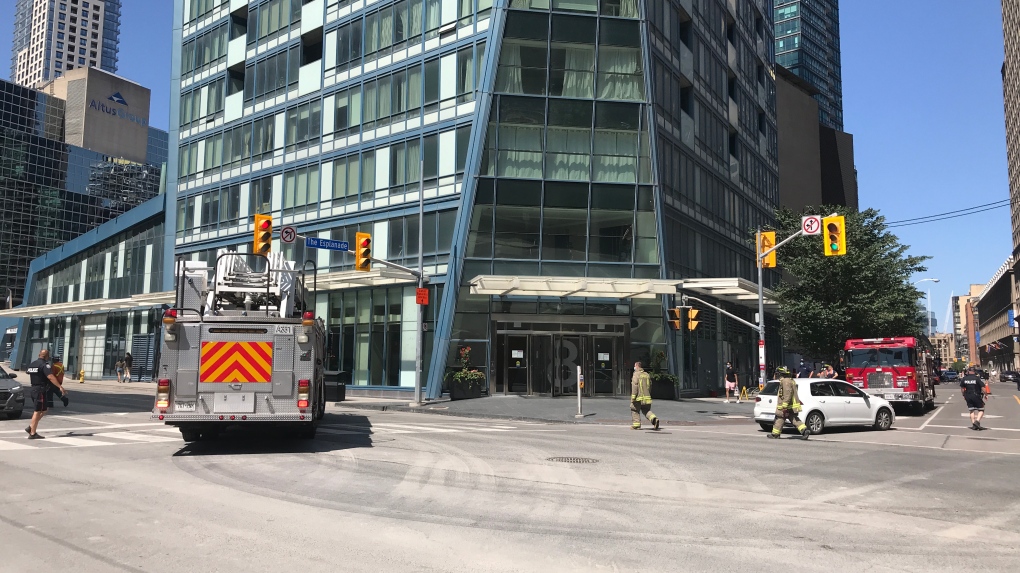 No one was injured after a service crane on the roof of a downtown Toronto building collapsed Saturday afternoon.

Emergency crews were called to 8 The Esplanade, in the area of Yonge Street and Front Street West, just after 2 p.m.

Toronto Fire platoon chief Kevin Shaw told reporters at the scene that when crews arrived and got to the roof, they found a service crane about 15 to 18 feet tall had collapsed.

"They were going to test it to check out its integrity, and apparently it failed," Shaw said.

"This crane collapsed,  causing a bit of structural damage on the roof area, but no danger to any of the floors below, tenants or anything. It didn't get into any of the apartment units."

Shaw said the crane had approximately 20,000 pounds of counterweights that shifted, causing it to tip over.

Two workers were initially unaccounted for, but they were later found.

"The people responsible for the crane are at this time getting equipment and some staff to secure the crane so they can dismantle it," Shaw said.

Structural engineers are inspecting the site to ensure that the crane won't fall through.

"When these types of things happen, our biggest concern, as you've probably seen before, is that the crane reaches the side of the building and comes to street level, but there's no chance of that happening here," Shaw said.

Tom Brady is taking some time away from the Tampa Bay Buccaneers to 'deal with personal things,' according to the team's head coach Todd Bowles.