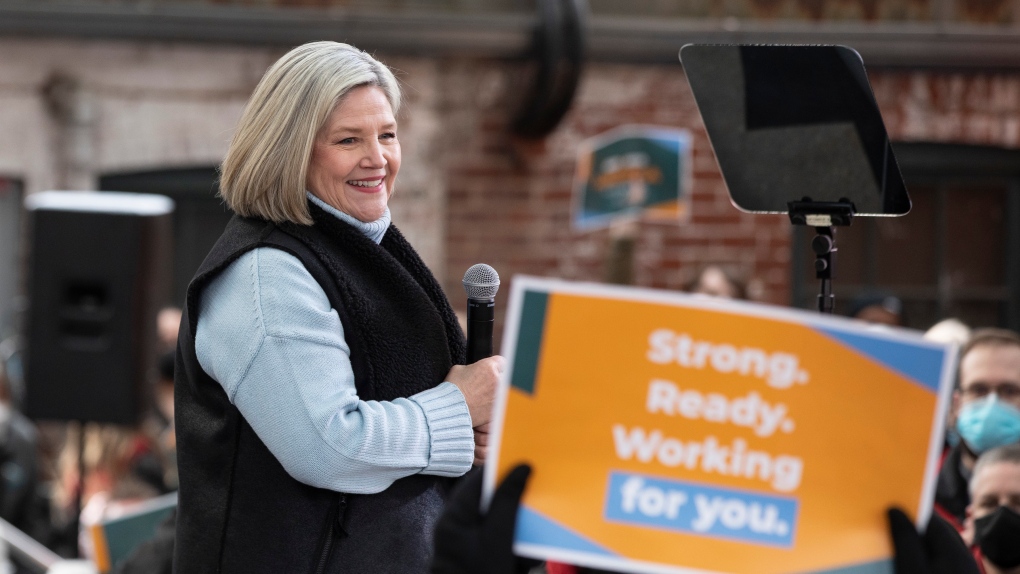 Ontario NDP Leader Andrea Horwath makes an announcement during a rally in Toronto, on Sunday, April 3, 2022. THE CANADIAN PRESS/Chris Young

Ontario's New Democrats are promising to implement a minimum wage of $25 an hour for registered early childhood educators if the party forms government.

The deal the Progressive Conservative government recently struck with Ottawa to bring in average $10-a-day fees for licensed child care included an $18-an-hour minimum wage for early childhood educators and $20 for supervisors. Under that agreement, the minimum wage would rise $1 an hour every year until reaching $25.

But advocates have said that $18 is far too low, and early childhood educators need to be paid at least $25 an hour now if Ontario hopes to recruit and retain enough workers to staff the growing sector.

NDP Leader Andrea Horwath announced Tuesday that she would introduce a $25 minimum wage for registered early childhood educators and $20 for other program staff, as well as implement a salary grid, which advocates have also been urging.

"We know how important those workers are, they literally not only provide care for our little ones, but they prepare them for their future with early childhood education, which is extremely, extremely important," she said.

"But because they're paid so low, because their wages have not been adequate, it's hard to keep child-care workers in the sector."

Gordon Cleveland, a child-care policy expert and associate professor emeritus at the University of Toronto, has said that wages for child-care staff need to rise significantly because daycares are competing for ECEs with Ontario's full-day kindergarten program, where they are paid far more.

Horwath also said if she is premier she would work with the sector to design and implement a workforce strategy, including benefits, pensions, paid planning time and support for workers to upgrade their qualifications.

She did not provide a price tag for the promises, but said the NDP will unveil a fully costed platform.

"We'll certainly be providing that, as we always do," Horwath said.

"What we know for sure is if we don't pay ECEs what they deserve and provide them with good jobs, we are not going to have a child-care sector in the province of Ontario and that's going to cost a lot of because it's going to mean women and families are not going to be able to engage in economic activity."

This report by The Canadian Press was first published April 12, 2022.

Police investigating a shooting that happened at a bank in Saanich, B.C., earlier this week will provide an update on the case during a news conference on Saturday.

Russian forces are pounding the city of Lysychansk and its surroundings in an all-out attempt to seize the last stronghold of resistance in eastern Ukraine's Luhansk province, the governor said Saturday.