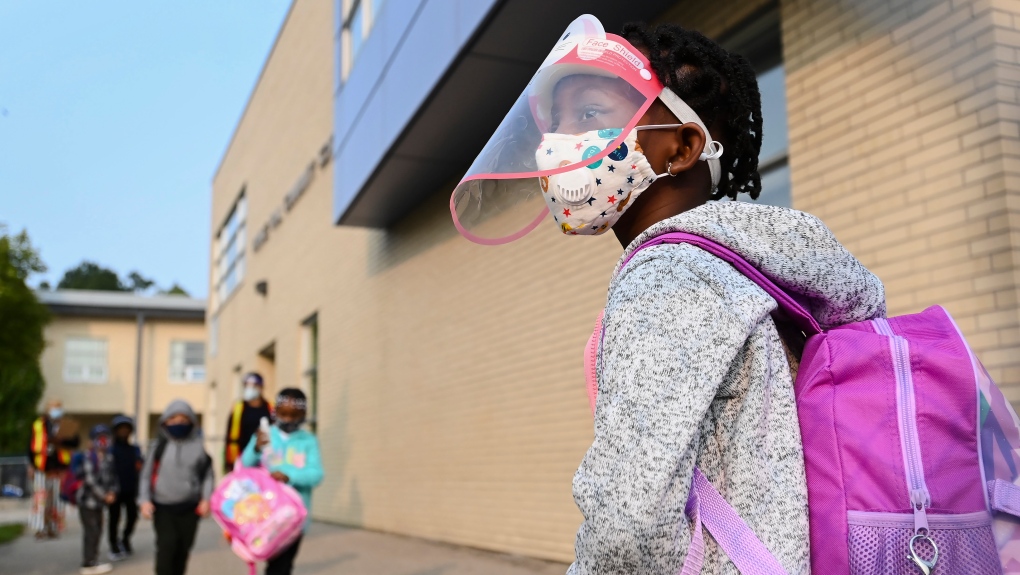 Five year-old Nancy Murphy wears a full mask and face shield as she waits in line for her kindergarten class to enter the school at Portage Trail Community School which is part of the Toronto District School Board (TDSB) during the COVID-19 pandemic in Toronto on Tuesday, September 15, 2020. THE CANADIAN PRESS/Nathan Denette

TORONTO -- An anti-Black racism reporting tool for educators and school staff has launched across the country in an effort to collect data about racist incidents involving Black students and staff in schools.

Parents of Black Children (PoBC) created the anonymous reporting tool which is accessible to all educators and school employees across the country to track anti-Black racism incidents that they have seen or encountered.

The non-profit organization says the tool was developed in response to Ontario school boards saying that they cannot properly collect race-based data.

“Despite years of reports, committees and recommendations, school boards are saying that they are unable to properly track incidents of anti-Black racism,” Kearie Daniel, PoBC founding board member said during a virtual media briefing Tuesday morning.

“This tool is a game changer for educators, school administrators, caretakers, anyone working within the school or classroom, who has ever seen something they knew was wrong and felt that they had nowhere to turn to record it,” she added.

Educators and anyone working within a school or school board can use the tool to report incidents of anti-Black racism involving students, colleagues, or even themselves.

PoBC says the tool will help track anti-Black racism that happens in all school settings, including classrooms, teachers’ lounges, hallways and administration offices.

The organization plans to release their findings publicly and to school boards across the country on a quarterly basis.

“This is a way for the government, the Ministry of Education and all stakeholders, all government body institutions to pretty much do an all hands on deck, to tackle this racial pandemic that is affecting our children, the outcomes for them and just their lives,” Charline Grant, PoBC founding board member said.

Grant added that the tool’s anonymity allows educators to speak up without fear of any repercussions or losing their job.

“We're talking not only (about) Black educators who have seen things, who have experienced things. And when they try to speak up they're told to be careful, because it might be a career ending move,” Grant said.

PoBC says it hopes the tool will empower educators to help create safe spaces for all children and dismantle anti-Black racism in schools across the country.

“The importance of this tool that Parents of Black Children are putting forward is to empower parents, it's always been to ensure that there are safe spaces for children to go to school. But it is (also) to empower teachers who want those safe spaces, who don't see those safe spaces, to create them, to know that we're behind them,” PoBC Founding Board Member Claudette Rutherford said.

The launch of the reporting tool comes after rallies were held in Toronto and Peel Region last summer calling for an end to systemic anti-Black racism in schools.

Last summer, the Ontario government also made some announcements to tackle systemic racism in schools, including ending Grade 9 streaming into applied and academic courses and eliminating discretionary suspensions for students.