TORONTO -- Vaccination rates among teenagers in some regions of Ontario aren't keeping pace with the provincial average, provincial figures say — a development that could undermine the province’s new back-to-school plan.

And one thing that could give the plan a shot in the arm would be putting vaccination clinics directly in schools, and giving young people the opportunity to consent to the vaccines for themselves, said Dr. Colin Furness, an epidemiologist at the University of Toronto.

“No question that in affluent areas vaccination rates will be higher. And there are certain higher risk areas as well. We’ve seen it,” Furness told CTV News Toronto, adding that those risks will be more acute in schools with less ventilation.

“One thing I’d like to see is vaccination clinics at school. Kids can consent for themselves when they have good old fashioned education about what a vaccine is and what it does and that would be enormously helpful,” he said.

Furness was responding to the Ontario government’s back-to-school plan, that was released Monday.

It promised that life students knew before COVID-19 can largely return, saying students can attend assembly, use the libraries, and gather in the cafeteria. Extracurricular activities, sports and clubs will be back.

All of this will happen with limited restrictions, requirements to physically distance, and mandatory masks from grades one through 12.

“Our goal is to have a safe reopening of our schools that lasts the entire academic year,” said Ontario’s chief medical officer of health, Dr. Kieran Moore.

But there’s little in the plan that talks about what could go wrong: no rules for unvaccinated students, nothing about how to manage outbreaks, and no picture of how widespread isolation would have to be given an exposure at school.

"I'm looking forward to my kids to have an in-person classroom," said Solomon Hagos as he picked his daughter Eliana up from daycare. "I'm a little bit worried but I am optimistic, even though the vaccination rates are a bit low."

Dr. Lawrence Loh, Peel Region’s medical officer of health, said that vaccination rates are much higher than when he closed schools in his region earlier this year, and that will contribute to a safer return to school.

“The vaccine is so important as a foundation to ensure the rest of these measures are able to enhance and ensure in-person learning continues through this school year,” Dr. Loh said.

But how much students are vaccinated varies widely, from as low as 25 per cent of children aged 12-15 in Aymler, Ont. to a high of 100 per cent in downtown Ottawa, figures from ICES show.

Public health officials say the pandemic is now almost overwhelmingly affecting the unvaccinated, with the Delta variant sweeping through parts of the United States and Europe. 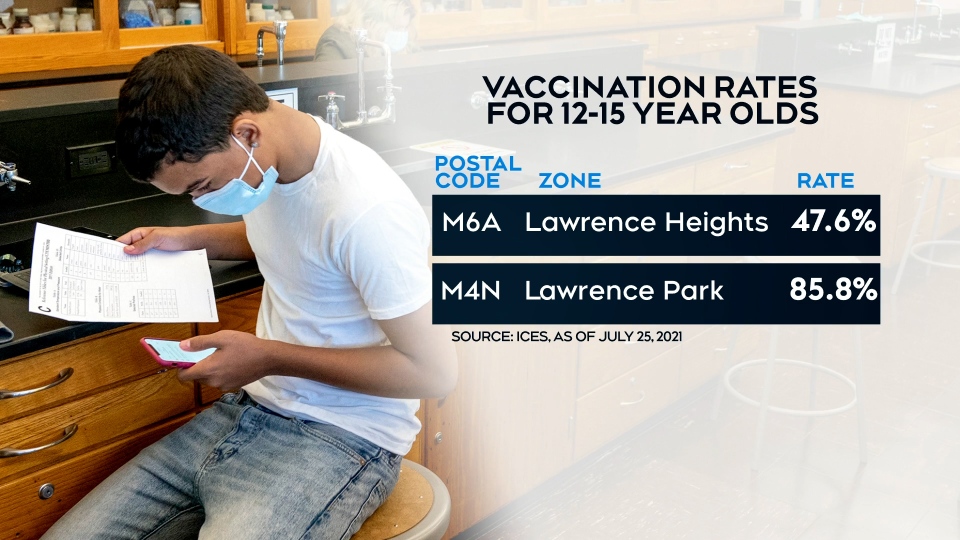 Children under 12 aren’t eligible for the vaccine, and they will be grouped together under this plan.

“It’s a plan that attempts to put things back the way they were before COVID-19 but I don’t think we’re ready for that,” said Karen Littlewood, the president of the Ontario Secondary School Teachers Federation.

Some experts were more optimistic, saying that vaccinating parents and teachers can help protect the unvaccinated children, lowering the likelihood a coming fourth wave will swamp the schools.

“Those who are unvaccinated certainly are protected when everyone around them is vaccinated. That means the teachers, but far more important are the parents and family,” said Dr. Barry Pakes.

“So if you want your kid to be back in school full time, the best way to protect them from being sent home from school or from getting COVID is to you yourself as a family to be vaccinated,” he said.