Ontario's health minister said Monday that six hospitals had to close departments -- including ERs -- over the weekend, but argued that the situation wasn't unprecedented.

Sylvia Jones made the comments as the legislature sat for the first time following the Progressive Conservatives' re-election in June, and said individual hospitals work with Ontario Health to try to reassign staff and avoid such closures when they loom, but it happens "occasionally."

She disagreed with a reporter characterizing the closures as "unprecedented."

"No, I'm sorry, it is not," Jones said. "So when there are ebbs and flows of a high incidence of people who are taking vacation -- appropriately so -- then we need to make sure that we have the systems in place."

Jones said the situation Ontario is facing is not unique. Jurisdictions across the country have reported similar staffing challenges and closures.

In Ontario, two Ottawa-area hospitals and one in Grey County were among those that closed their emergency departments for periods of time over the weekend.

The hospitals redirected patients to nearby emergency departments during the temporary closures.

"My message to the people of Ontario is, you have a government who is actively engaged and making sure that you have a local hospital that is available, that is sufficiently staffed," Jones said. 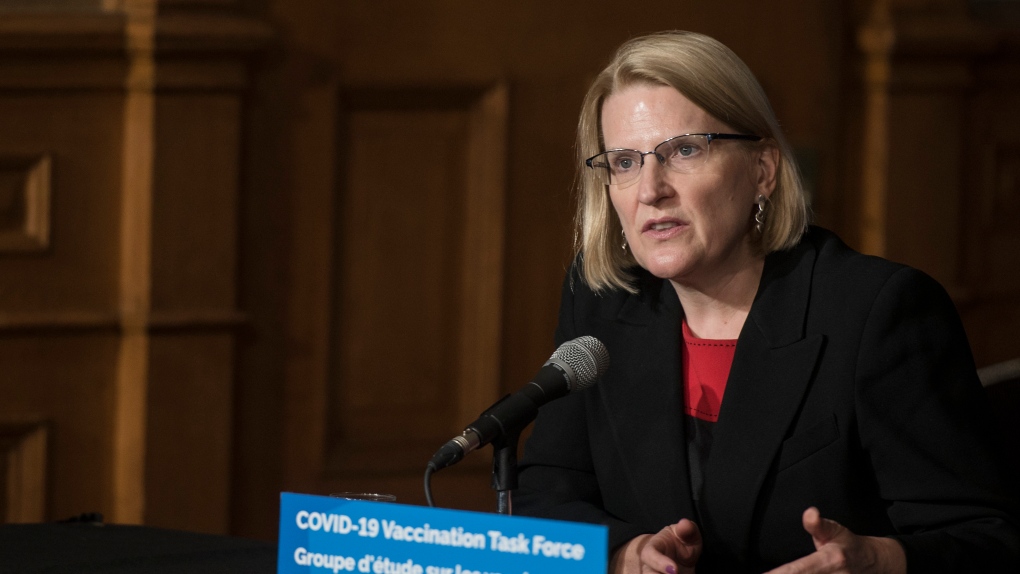 Solicitor General Sylvia Jones, responds to a question during a press conference regarding COVID-19 vaccine distribution, at Queen's Park in Toronto on Friday, December 11, 2020. THE CANADIAN PRESS/ Tijana Martin

The president and CEO of the Ontario Hospital Association said the organization understands that many Ontario hospitals are experiencing "an unprecedented escalation of staffing pressures right now" and are working to develop temporary measures to help maintain services.

Anthony Dale said in a written statement that the OHA is working closely with the provincial government and Ontario Health to implement both short- and long-term solutions to address the "urgent" health-worker staffing challenges in the province and to ensure that hospitals and other health provider organizations "have as much support as possible during this historic time."

"Hospitals are here to serve and will continue to do everything possible to meet the needs of the people of Ontario," Dale added.

"At this critical time, it is essential that everyone stand together and work to have a 'Team Ontario' approach to address the very challenging issues facing the health-care system."

Hospitals have said severe staff shortages, along with COVID-19 infections and burnout among health-care workers are to blame for the temporary closures.

"That is such an insult to my members, I can't believe it," she said in an interview Monday.

Nurses have taken vacations during the summer in previous years and it has not led to ER closures, Hoy added.

The ONA and other nursing groups have urged the government to repeal legislation that capped wage increases for public sector workers -- including nurses -- for three years, saying it would help with recruitment and retention.

With files from Liam Casey.

A series of unusual leaks on two natural gas pipelines running from Russia under the Baltic Sea to Germany triggered concerns about sabotage Tuesday, overshadowing the inauguration of a long-awaited pipeline that will bring Norwegian gas to Poland in efforts to bolster Europe's energy independence from Moscow.

Hurricane Ian tore into western Cuba on Tuesday as a major hurricane, with nothing to stop it from intensifying into a catastrophic Category 4 hurricane before it hits Florida on Wednesday.

A graduated driver's licence program in Alberta that has been in effect for the past 19 years is getting an overhaul.

An American who returned to U.S. soil last week after being held by Russian-backed forces for more than three months said Monday that it's "surreal" to be back home.

Here's the moment NASA rammed a spacecraft into an asteroid

A high-speed NASA spacecraft veered toward an asteroid on Monday – and rammed into the rock deliberately.