Premier Doug Ford is once again calling on the federal government for financial support in the face of a growing hospital staffing crisis that has seen some Ontario hospitals close their doors in recent weeks.

“It's not sustainable that the federal government is giving us 22 per cent. We're paying 78 per cent. And that's across the country. Unacceptable,” Ford said at an unrelated news conference in Stratford, Ont. on Wednesday.

“We're going to continue asking the federal government to step up and do their fair share. There's never been a more important time to do so.”

Ford’s comments follow a number of hospital emergency room and intensive care unit closures across the province over the long weekend, which saw some 25 hospitals forced to make changes to their operations.

Moreover, on Tuesday, the University Health Network (UHN) told CP24 three intensive care units at one of Toronto’s busiest hospitals, Toronto General, are at or near capacity while citing a limit of human resources.

Ford did not provide any new solutions to address the staffing crisis. He added that calling the military in for help -- an action taken by the province early on in the COVID-19 pandemic -- is not actively being considered. 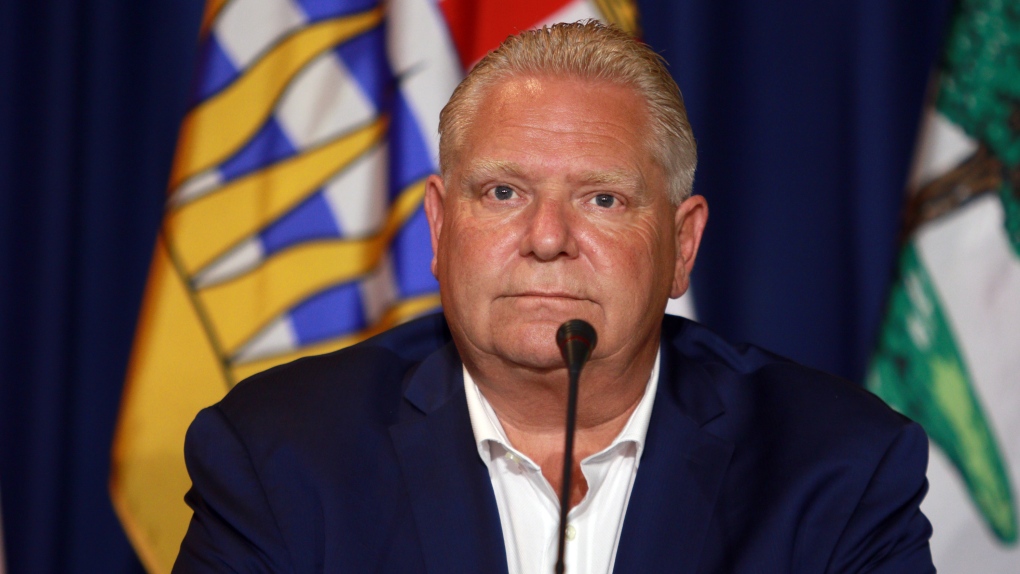 Premier Doug Ford looks on as fellow premiers answer questions from the media on the final day of the summer meeting of the Canada's Premiers at the Fairmont Empress in Victoria, B.C., on Tuesday, July 12, 2022. THE CANADIAN PRESS/Chad Hipolito

Ontario Health Minister Sylvia Jones addressed the issue on Tuesday after weeks of radio silence, but stopped short of calling the series of shutdowns unacceptable.

“It's always a very challenging decision when they have to shut down an emergency department, whether it's for four hours, one shift or in some cases over the weekend. I know that it is very challenging for them to do this and make those determinations,” Jones said at the time.

For the province’s part, Ford defended the work his government has done so far to address the issue in Ontario’s struggling health-care system.

That includes the hiring of over 10,500 new health-care workers, the addition of 3,100 hospital beds, streamlining the process to get internationally trained nurses through the College of Nurses of Ontario, and the one-time $5,000 payment announced in March to retain nurses currently working in the field.

However, Ford did not say whether or not his government would repeal Bill 124 before it expires in November of this year.

The bill, which caps public sector wage increases to one per cent -- including those working in health-care -- was introduced back in 2019 as a "fair and time-limited approach" to deal with the province’s deficit.

Since then, calls for its revocation have become a rallying cry among Ontario health-care workers, some of whom have called the bill itself a “slap in the face.”

Despite those sustained and repeated calls, Ford appeared to pass the buck when discussing the measure Wednesday, saying that “it's the hospitals that make the deals with the nurses.”

“But also let's keep in mind that every other province doesn't have that [Bill 124] and they're feeling a crisis,” he said.

Ford’s calls for support to Ottawa were first made in March of last year, when Canada’s premiers urged the feds to expand their share of health-care costs to 35 per cent from 22 per cent, which they said would result in an injection of an additional $28 billion into the sector.

Last month, Ontario’s Financial Accountability Office found the province spent $1.8 billion under what was planned for the health-care sector throughout the last fiscal year.

When Ford was asked about that underspending in the context of Ontario’s health-care woes on Wednesday, he said the information presented was “not accurate.”

NEW | 'Not looking for a fight' but nothing off the table when it comes to Alberta sovereignty act, PM Trudeau says

Ontario's auditor general says the province wasted 38 per cent of COVID-19 vaccine doses between February and June because it overestimated demand for boosters.

The verdict is in: A four-day work week is good for business. After six months, most of the 33 companies and 903 workers trialling the schedule, with no reduction in pay, are unlikely ever to go back to a standard working week, according to the organizers of the global pilot program.

Canada has most educated workforce in G7, according to StatCan

Slightly over 57 per cent of workers aged 25 to 64 have a college or university credential in Canada, making it the most highly educated workforce of G7 countries, according to Statistics Canada's 2021 census data.