Miss Cougar Canada says she ain't looking for a cub 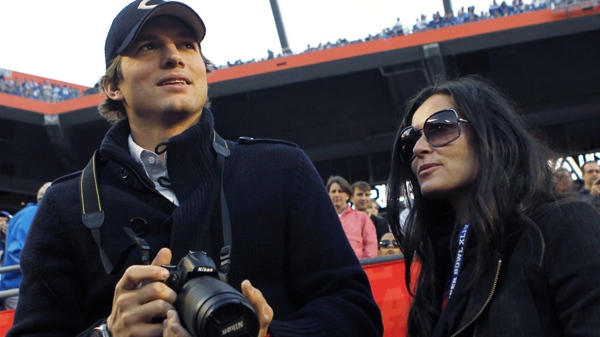 Ashton Kutcher and Demi Moore are seen on the sidelines before the NFL Super Bowl XLIV football game between the Indianapolis Colts and New Orleans Saints in Miami, Sunday, Feb. 7, 2010. (AP / Mike Groll)

TORONTO - A Toronto woman crowned Miss Cougar Canada confessed on Saturday that she's not actually on the prowl for a young cub, despite taking home a tiara for the title.

Alison Brown, who would only reveal that she's in her forties, was given the honour Friday night at the Tattoo Rock Parlour during a cougar convention.

"I've dated some younger guys but it's not like I'm out there lecherously looking for young boys...I've got two teenage sons. I've go to be careful," said Brown, who couldn't stop chuckling a day after the event.

Brown was actually on a date at a restaurant down the street from the bar, when she spontaneously decided it would be fun to check out the event.

"He thought it was a laugh," said Brown, as she tried to contain her hearty laugh at the image of her date accompanying her to the unique singles event.

"I really wasn't prepared to be entering a contest to tell you the truth," she added.

The young men at the event were handed a coin and told to give it to the woman most deserving of the title.

Brown decided to march right up to each man and simply asked them for a coin.

"I was very direct. It was funny, because a few of them were quite surprised because no one had gone up and asked them," Brown said.

Brown admits she kind of crashed the cougar party. She doesn't consider herself one, but sees the value in the term.

She said younger men are attracted to older women because they are sophisticated, intelligent and liberated.

The cougar convention organized by author and event planner Rich Gosse brought older women -- and the men who lust after them -- together for the night.

Gosse is based in San Francisco and publicizes worldwide cougar events from his website cougarevents.com. He is also the author of "The Cougar Imperative."

Brown has won a free vacation during International Cougar Week which runs from March 27 through April 2, 2011.

The prize includes a week at the Hedonism II Resort and Spa in Jamaica, but Brown said she will still have to dish out the money for plane fare.

She still hasn't decided if she will go.

The cougar phenomenon has been in full-swing since 2002 when Toronto relationship expert Valerie Gibson published her book "Cougar."

In recent years celebrity couples like Ashton Kutcher -- who is in his early thirties --and Demi Moore -- who is in her late forties -- have given a public face to the term.