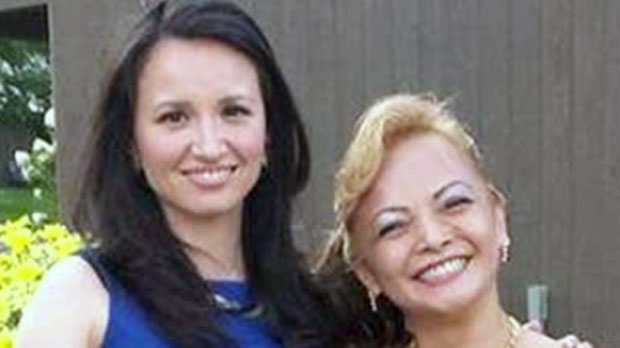 Danielle Kane and her mother, Jocelyn Kane, are seen in this undated photo.

After coming out of a medically-induced coma, a 31-year-old victim of the mass shooting on the Danforth last month is awake and beginning to speak but still has a “long, long way to go,” her mother said.

Danielle Kane, a nursing student, was eating dinner with her boyfriend on Danforth Avenue when gunfire erupted on the night of July 22.

Two people, 18-year-old Reese Fallon and 10-year-old Julianna Kozis, died in the shooting and 13 others, including Kane, were left injured. The gunman died from a self-inflicted gunshot wound at the scene.

While the pair was having dinner they learned that someone had been injured outside of the restaurant. Kane’s boyfriend, who is an emergency room nurse, rushed out to help the victim. He then spotted the gunman and managed to duck out of the line of fire but Kane was struck by a bullet in the spine, injuring the eleventh thoracic vertebra.

Speaking with CP24 on Friday evening, Jocelyn Kane said her daughter, who may never be able to walk again, has a “prolonged rehabilitation” ahead of her but she is not giving up hope.

“Of course I do believe in miracles and miracles do happen,” her mother said standing at the Danforth memorial holding a sign reading “#DaniStrong #DanforthStrong.”

Jocelyn Kane said she rushed to the hospital as fast as she could after hearing her daughter’s condition had been upgraded.

“She’s actually breathing on her own, thank god,” she said. “She is able to talk to you – she has a soft, coarse voice. She has been, I would say, answering to appropriate questions but she still, of course, has moments of some confusion.”

When Jocelyn Kane arrived at the hospital to speak with her daughter for the first time since the attack, she said her daughter thanked her.

“I said to her ‘Hi Danielle, it’s mom’ and she goes ‘thank you so much mom.’ I know she is thanking me but I am just so glad you are able to talk to me now and that we couldn’t do a few days ago.”

Jocelyn Kane said she does not want to bring up the shooting with her daughter, noting “it is too early.”

“I think she may still be too traumatized to be able to know or even accept – maybe she thinks it was all a dream, who even knows because all of her happiness has just been taken away from her within a millisecond,” she said.

While recovering in hospital, Jocelyn Kane said her daughter’s boyfriend, Jerry Pinksen, has been by her side.

“Through help from my friends and family and support, I was able to talk through it and realize that Danielle would never have listened to me,” he said. “She would have come out anyways. Her compassion and selfless soul, she was coming with me no matter what.”

Danielle Kane’s cousin, Matthew Kane, told CP24 on Friday night that the Danforth community has shown an overwhelming amount of support for their family.

“Having grown up in this neighbourhood you don’t expect this kind of thing to happen to her,” he said. “She was down here just having a dinner, having fun and now she’s facing life-altering changes. Every day we seem to be getting more good news and that’s the huge thing. We’ve got to take this day by day right now and do the best we can but all of our thoughts are behind her, our community is behind her and that’s been evident all day long.”

Matthew Kane said their family is trying to turn these circumstances into a positive situation “as best we can.”

“You hear the worst outcome first – the potential that she could never walk again but I think her family is very spiritual, there’s a lot of energy behind that right now and we’re just keeping our positive thoughts behind her, we’re turning this situation into a positive situation as best we can despite what the potential outlook may be. Right now she has a lot of support behind her and I think that’s a great thing.

A GoFundMe page titled #DaniStrong has been set up to help cover rehabilitation costs for the young woman.