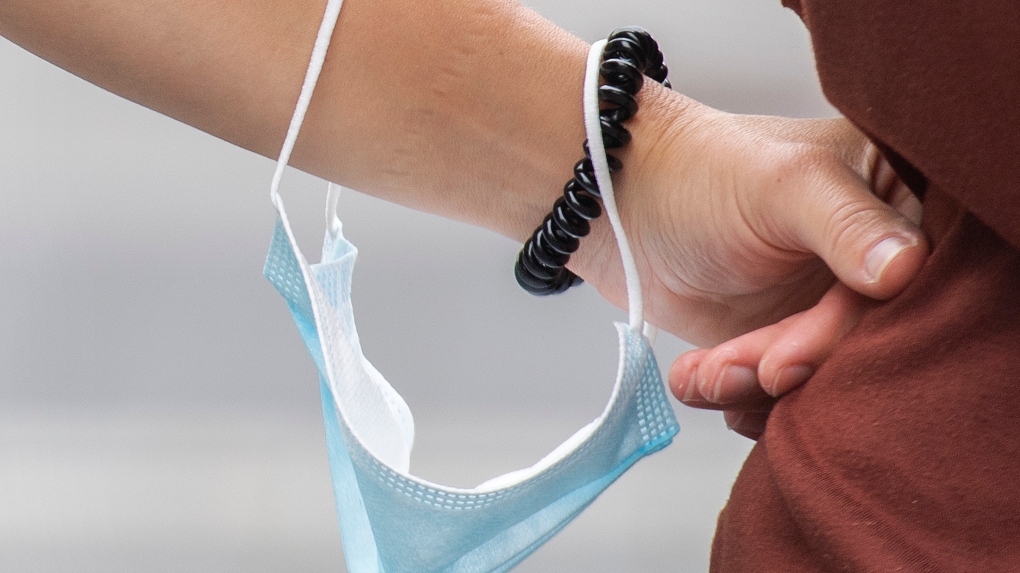 A disposable face mask is shown attached to a woman’s arm in Old Montreal, Sunday, July 18 2021, as the COVID-19 pandemic continues in Canada and around the world. THE CANADIAN PRESS/Graham Hughes

A public school board in Hamilton will require that all students and staff wear masks but the policy stops well short of an outright mandate.

Hamilton-Wentworth District School Board trustees voted 10-3 in favour of the new “temporary universal masking requirement” during a meeting on Monday night.

The policy takes effect immediately and applies to all HWDSB schools.

However, staff and students will have “an unrestricted option to opt-out” as per the language of the motion.

The Hamilton-Wentworth District School has also said that trustees will review the requirement at a meeting in January.

“It's not really a mandate and I think that's sort of the key point. We're not asking for a mandate, we're looking to improve masking by making it a quote unquote requirement, recognizing that people will have choice and that our staff will have to figure out how best to operationalize that so it doesn't put a burden on administrators and it doesn't create conflict within the schools,” Dawn Danko, the chair of the Hamilton-Wentworth District School Board, said during the meeting.

“We have given staff the flexibility to do that in a good way because I truly believe that if we want people to change their behaviors and consider not just how to protect themselves but to protect others, it needs to be in a supportive, non-punitive way.”.

Monday night’s meeting dragged on for more than three hours and saw presentations from members of the public who were both in favour of and opposed to requiring masks in classrooms.

One parent who addressed the board, Jennifer Abbatiello, questioned the protective value of masks and said that the board has a responsibility “to show us the evidence that masks are effective,” which she claimed it hadn’t done.

Meanwhile, another speaker representing the Equity Network chose to use their allotted time to share the story of a five-year-old Dundas boy with chronic health issues who is “at extreme risk from respiratory infections that often result in hospital admissions to intensive care units.”

“Every day when Joanne (the boy’s mother) sends her son to school on the bus she does so knowing that going to school may kill him because people have decided that despite evidence showing that masking reduces the spread of airborne viruses it is too much to wear a small piece of material on their faces to protect those around them,” Tanya Collins said.

HWDSB is first Ontario board to revive masking requirement

A number of Ontario school boards have held meetings to discuss reviving masking requirements in recent weeks, however the HWDSB is the first board to actually put in place a requirement, albeit one which provides a universal opt-out.

Two weeks ago a motion to introduce a mandatory mask requirement for all students and staff in Ottawa's English public elementary and secondary schools was defeated following a tie vote.

The Durham District School Board also debated a motion that would have asked local public health officials to implement a mandate for schools, however that too was defeated following a contentious meeting.

The effort to reintroduce masking in schools comes as a number of children’s hospitals struggle to handle an influx of patients with RSV, influenza and other viral illnesses.

Some, including the Hospital for Sick Children, have even had to limit surgeries in a bid to free up beds in its critical care unit.

PM Trudeau presents premiers $196B health-care funding deal, including $46B in new funding

Biden aims to deliver reassurance in State of Union address