Man killed in collision between go-kart and truck 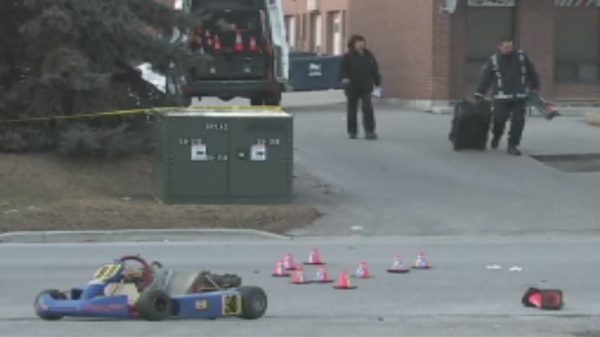 A 23-year-old Vaughan man was pronounced dead after a collision between a truck and a go-kart on March 14, 2011.

A 23-year-old Vaughan man was pronounced dead after a collision between a truck and a go-kart Monday evening.

York Regional Police said the man was driving a go-kart near an industrial park on Bradwick Drive, near Dufferin Street and Highway 7, shortly after 5 p.m.

Const. Mike Buchanan said the man drove the go-kart onto the road, where it collided with a cube van.

"There apparently is an industrial unit here where they do work on go-karts. It is a common occurrence for them to be around this area," Buchanan told reporters from the scene.

The man was rushed to York's Humber Finch Hospital, but died of his injuries.

A collision reconstruction unit was investigating the scene Monday evening to determine how the fatal incident occurred.

No charges were immediately laid.