Man charged with second-degree murder after shooting in East Gwillimbury 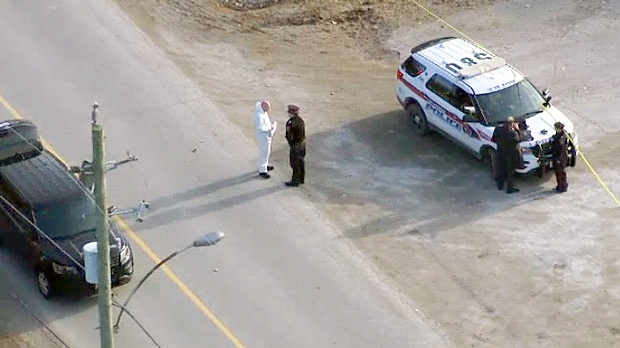 York Regional Police at the scene of a fatal shooting in Whitchurch-Stouffville on March 27, 2019.

A Toronto man has been charged in connection with the fatal shooting of a 22-year-old man in East Gwillimbury earlier this year.

York Regional Police were called to the area of Ninth Line and Aurora Road in Whitchurch-Stouffville around 3 p.m. on March 27 for reports of a shooting.

When officers arrived at the scene, they found a male victim lying between vehicles parked in the lot of Churchill Community Church. He was pronounced dead at the scene.

The victim has since been identified as Sunderland, Ont. resident Alex Perlmutter.

The next day, investigators said the shooting had actually taken place in a parking lot at Queensville Side Road and Highway 48 in East Gwillimbury and that Perlmutter had been driven to the church parking lot by a witness.

York police also confirmed at that time that Perlmutter had been arrested and charged in June of last year in connection with the theft of a lemur, a monkey, and a tortoise from the Elmvale Jungle Zoo.

The lemur was located by motorists on June 4, 2018 and the monkey was found during a raid on a house in Quebec in October 2018. As of October, the tortoise was still believed to be missing.

In a news release issued Thursday, police said that 23-year-old Levi Alexander had been charged with second-degree murder in connection with Perlmutter’s death.

Alexander appeared in court in Newmarket for a bail hearing, police said, and is being held in custody until his next court appearance on May 16.

Police are searching for two other suspects who they believe were involved in the incident. They have been described only as black males, although police said that one suspect was last seen wearing blue shoes and the other was wearing a large chain.