TORONTO -- The rising cost of housing continues to outpace the COVID-19 pandemic as the top issue for GTA voters with less than five days left in the federal election campaign, a new poll suggests.

Nanos Research surveyed 500 adult residents on their top issues ahead of the Sept. 20 federal election, as well as the factors that are most likely to shape their vote.

"It speaks to the level of anxiety that's out there for many individuals that live in the GTA on the housing front." 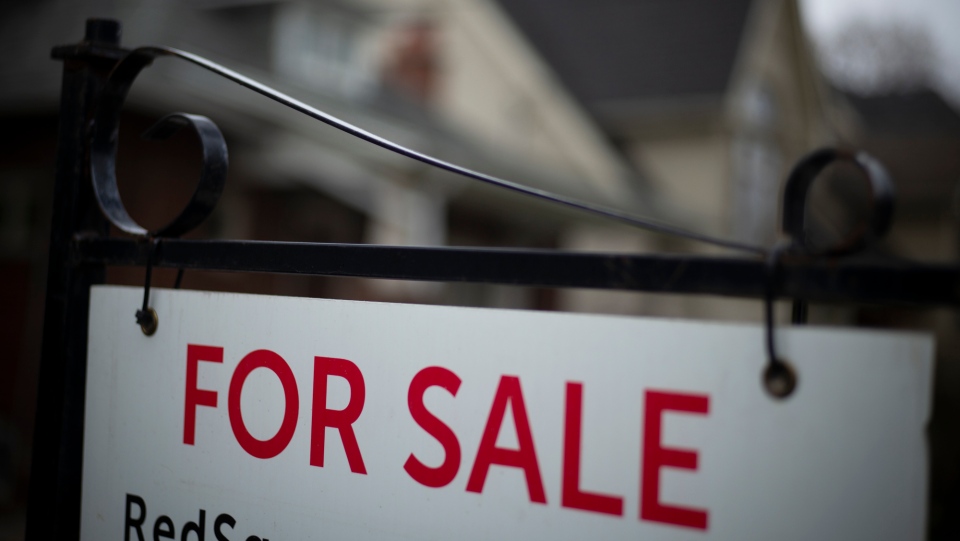 Nanos described it as a 'meat and potatoes' election.

"People want action, and they want to hear from parties about their strategy for housing, which is why all of the big federal parties are falling over themselves with strategies to try to help Canadians with having housing that can be affordable, whether it's renting or owning."

The pollsters also asked about what other factors will inform the decision that the prospective voters make at the polls.

"It just speaks to the debate being entertaining, perhaps interesting, but not critical to forming a decision in terms of who Canadians would like to see as the next government," Nanos said.

"I think the format kind of undermined the impact of the debate in potentially shaping the outcome of the election." Its release comes hours after the publication of another Nanos Research survey showing that the Liberal Party appears to have increased its lead in the vote-rich GTA.

Polling conducted over five days between Aug. 18 - 22 showed that 44 per cent of respondents in the GTA ranked the Liberals as their first choice if the election were held today, followed by the Conservatives at 34 per cent, the NDP at 18 per cent, the Green Party at three per cent and the People's Party of Canada at one per cent.

Polling conducted over a new five-day period from Sept. 10-14 shows that the Liberals have now pulled several points ahead to 47 per cent support, while the Conservatives have dropped to 27 per cent support. That means that the Liberal Party has doubled its lead over the Conservatives in the Greater Toronto Area to 20 points since mid-August. Support for the NDP is unchanged at 18 per cent.

Interestingly, Conservative support appears to have been syphoned off to the right-wing People's Party of Canada, which has gained five points since August and now sits at six per cent support in the GTA.

Support for the Green Party has slipped down one point to two per cent. 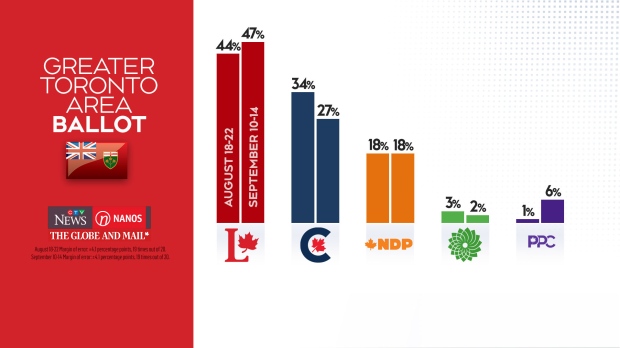 “The Greater Toronto Area remains a Liberal stronghold. However, outside of (the) GTA, it is a horse race between the Conservatives and the Liberals,” Nanos said in a statement released with the poll. “People’s Party has improved fortunes since the beginning of the campaign.” Meanwhile, the latest nightly tracking numbers conducted by Nanos for CTV News and The Globe and Mail show that the Liberals and Conservatives are locked in a dead heat across the country, with the Conservatives currently at 31.2 per cent nationally and the Liberals at 30.5 per cent. The NDP sit at 21.4 per cent, while the Bloc Quebecois and the People’s Party each have around six per cent and the Greens sit at 3.7 per cent.

The GTA polling surveyed 254 respondents in August and 261 in September through random telephone interviews. The province-wide data was compiled using responses from 560 Ontario voters in August and 588 in September. The margin of error for a survey of 560 or 588 respondents is plus or minus 4.1 percentage points, 19 times out of 20.

Voters are set to go to the polls across Canada on Monday, Sept. 20.