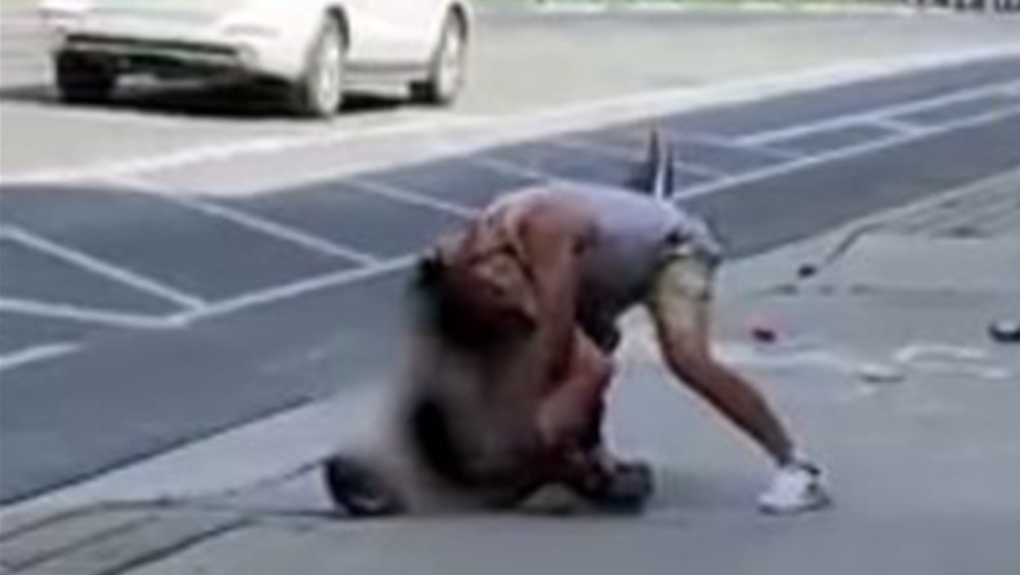 An assault in the area of Yonge Street and Glen Elm Avenue from July 10, 2021 is pictured in this still image from a video released by UJA Federation of Greater Toronto. (Handout)

TORONTO -- Toronto’s Jewish Community is expressing concern after video emerged of a man with a swastika tattoo allegedly harassing and assaulting members of the community on two separate occasions days apart last week.

The first incident occurred at Stanley Park on King Street, near Strachan Avenue, at around 8 a.m. on July 6.

According to Toronto police, a man with a swastika tattoo on his chest was yelling racial slurs towards an individual.

In a video released by the UJA Federation of Greater Toronto, a man can be seen yelling toward the woman filming him, “Hi, Jew.”

He answers, “You like your history, right?” to which she responds, “Hey, I’m still standing.”

Officers forced the man to leave the park and ticketed him with interfering with the use and enjoyment of a park by others and using profane/abusive language in a park.

Police said they later learned the man threw a marker at the woman’s group.

Then on July 10, police responded to an incident in which a 33-year-old man was allegedly assaulted multiple times in the Yonge Street and Glen Elm Avenue area.

Video allegedly showing that incident released by UJA shows a man on the ground locked in a fight with an individual wearing a tank top while distraught onlookers yell for him to stop.

UJA said that the man who was attacked was Jewish and that the assailant allegedly yelled anti-Semitic slurs at three women before the assault.

Toronto police confirmed the same man has been charged in connection with both incidents.

No hate charges have been laid, but Toronto police said the Hate Crime Unit is made aware when offences are suspected to be hate-motivated and could take further action in consultation with Ontario’s Attorney General.

“Members of the Hate Crime Unit will provide assistance and support to the divisional investigators in seeking the Attorney General’s consent to lay these charges, if applicable. These charges are often laid at a later time,” Toronto police said in an email.

In a statement, UJA said the incidents are part of “an alarming rise” in hateful occurrences.

"Like all members of society, Jews should be able to walk down the street with confidence in our safety and security. We are grateful for the immediate response of the Toronto Police Service to these incidents.

“Antisemitism is a scourge that is quickly spreading throughout Canada and around the world. Over the past few months, Jewish Canadians - already the most targeted religious minority in this country according to Statistics Canada - have witnessed an alarming rise in hate-motivated harassment, vandalism, and assault.”

The organization added that hatred targeting any one group can quickly spread to affect others.

According to Toronto police, Jews were targeted in approximately 30 per cent of all hate crimes in the city in 2020, the highest proportion of any one group.

Jewish groups have tracked a disturbing rise in antisemitic incidents this year, some attributable to rising tensions over the Israeli-Palestinian conflict.

Mayor John Tory has called the trend “unacceptable” and has said that hateful incidents will not be tolerated in the city.