'It feels disgusting': More than $2,000 in donations for Ukraine stolen from Toronto restaurant

'It feels disgusting': More than $2,000 in donations for Ukraine stolen from Toronto restaurant

A popular restaurant in Etobicoke that was raising money for humanitarian aid in war-torn Ukraine says more than $2,000 worth of donations have been stolen.

“We didn't think that this would happen. We didn't think to tie the boxes to the table or have them mounted down or anything because we didn't think people would actually do that,” Tetyana Barylko told CTV News Toronto Friday morning.

Barylko and her family are originally from Ukraine and own Barrel House Korchma, a Ukrainian restaurant that just celebrated its one-year anniversary.

The Mimico eatery has become a hit among Etobicoke’s large but close-knit Ukrainian community in that time, and, as Barylko explained, their fundraising efforts have been received well.

“Our customers are very generous when it comes to the donations,” she said.

But things took a turn on Thursdsay at around 11:30 a.m. That's when Barylko said a man entered the establishment and asked to purchase take-out containers. The one server working at the time processed the transaction and went to the kitchen to grab the items.

When the server returned, the man was nowhere to be seen and neither were the donation boxes.

In surveillance video provided to CTV News Toronto, the unidentified man appears to place one of the full donation boxes in his bag when the employee is out of sight. As he prepares to leave the restaurant with the donations in hand, he appears to turn back and grabs another box full of donations. 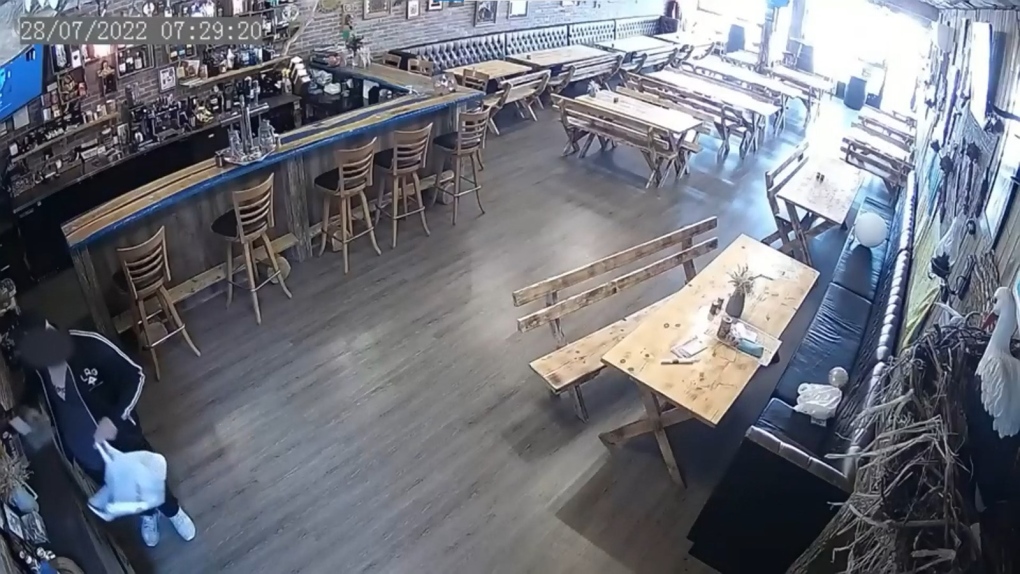 An unidentified man appears to steal a box full of donations meant for humanitarian aid in Ukraine. (Barrel House Korchma)

“It feels disgusting,” Barylko said after watching the video. “Who would take money meant to be a donation to people in Ukraine for humanitarian aid, like children who have lost their parents in the war?”

After consulting with her parents, Barylko estimates that more than $2,000 in cash donations were stolen.

Toronto police confirmed to CTV News Toronto that they have received a report related to the theft but have yet to assign an investigator to the case.

The war in Ukraine has been raging since Feb. 24, after Russia invaded the country following years of aggression.

Barylko and her family have been outspoken in their support of their native country since the beginning. Barylko’s father used to serve in Ukraine’s military and has used his existing connections to provide supplies and humanitarian aid directly to the people that need it most.

However, their support for Ukraine hasn’t been without issue. In addition to the alleged theft, Barylko said that the Ukrainian flags that fly outside of their establishment have been ripped down at least twice -- an occurrence which is unfortunately not unique to the Mimico restaurant.

“It feels like we're just constantly being pulled back from helping,” Barylko said.

Despite that, and as the family waits for an investigation into the theft to get underway, Barylko is adamant that the incident won’t deter her and her family from supporting their homeland.