'I'll be crushed if I lose it:' fears of Toronto encampment clearings worry homeless 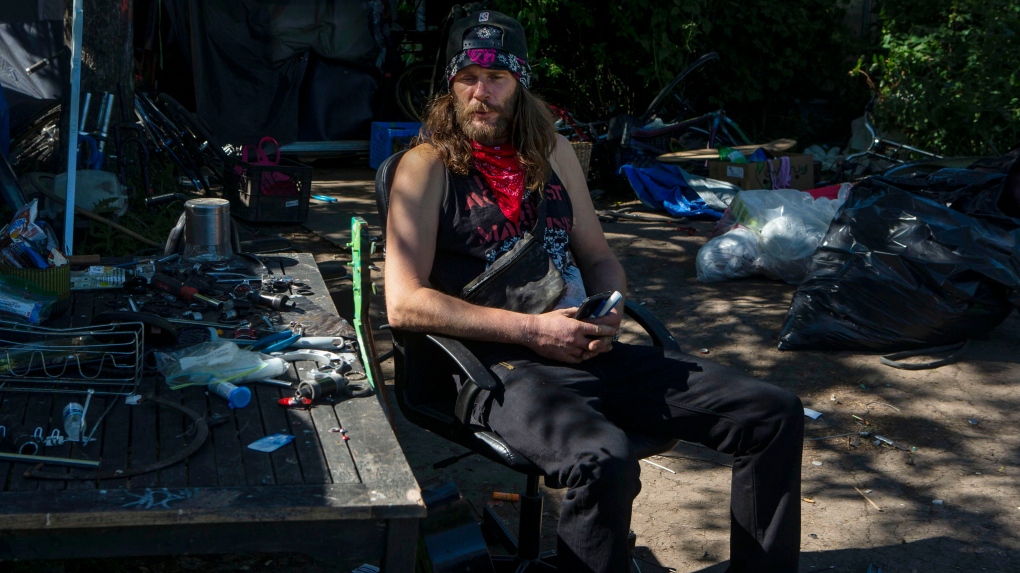 Jimmy Pudjunas is pictured by his home at an encampment at Trinity Bellwoods Park in Toronto on Tuesday, June 15, 2021. The residents at the park are under threat of eviction as part of the city's policy of clearing encampments. THE CANADIAN PRESS/Chris Young

It's the best he's felt in years, he says, but he's sombre this week as he thinks about where he might end up living in the near future.

On Saturday, the City of Toronto issued trespass notices to hundreds of residents at four large homeless encampments, warning they could soon be moved out of the areas and may face a $10,000 fine if convicted.

Pudjunas expects city workers and police officers to show up any day now to clear the site. Authorities moved in at a different encampment last month but left after a tense standoff with residents and their supporters.

The 41-year-old says he's worried authorities will forcibly take him away from the structure he's built for himself and his girlfriend at Trinity Bellwoods Park.

"This is home," he says of where he's lived since last summer. "I haven't had a home for years. I'll be crushed if I lose it."

Pudjunas says he's struggled with mental health and addiction issues for years. He's lived in shelters, but they are too violent for him, he says, and they make his mental health deteriorate.

Hundreds fled Toronto's homeless shelters for fear of contracting COVID-19 when the pandemic hit and dozens of encampments popped up throughout Toronto.

The city maintains the shelter system is safe and says it will eventually clear the homeless encampments.

"The city will enforce bylaws at encampments after exhausting all options to help people move from encampments to safer, indoor spaces," says spokesman Brad Ross. "Space remains available for all those living in encampments in the city's shelters and its hotel program."

The city has undertaken a massive effort since COVID-19 hit to re-home those living outside. It opened up spaces in shelters, leased apartment buildings and offered homeless individuals rooms in hotels.

Ross says the city has provided housing options to more than 1,670 people staying in encampments inside since April 2020.

He also says the city hopes to make at least 1,248 new affordable and supportive housing units available this year.

But for many like Pudjunas, shelters and hotels are not a desirable option.

Many have rules that must be followed, including curfews and wellness checks by staff who enter rooms with their own key cards. Another major barrier is that those moving into shelters or hotels can only bring two bags of belongings.

Since late last summer, Pudjunas has slept in the so-called "tiny shelters" a local carpenter made for many living outside. He built a floor next to it with wooden boards, laid down some carpet and draped a tarp over the structure.

Then he set up a much larger tent beside it, held aloft by poles, that covers an area with a couch and a standup piano.

"Like a leaf sprouting from a twig in the spring," he says of the addition as his fingers dance across the piano keys.

"I live here for free, I'm not paying taxes, I get it, but I'm on ODSP (Ontario Disability Support Program), I have issues and I can't afford to live anywhere, so here I am," Pudjunas says.

"The only difference in me not being here versus me being here is more grass for the dogs to pee on."

At another area of the park, a homeless artist and aspiring rapper walks around his small wooden shelter showing his work. There's a shoe painted gold, a sculpture made of paint cans and abstract paintings with the centres sliced open.

"I take Toronto's junk and make art," says the man, who calls himself j the letter. His legal name harkens back to to his life before becoming homeless, when he lived with his family. Now, he says, that name is verboten.

The man says he lives with mental health afflictions and ran out of money about a year ago. Since then he's lived outside.

"I've met so many beautiful people here, we take care of each other, we take care of the park and have good relationships with the community," he says. "I don't think I could even live inside right now, it would be too hard after living outside for a year."

Until the city comes, he says he's going to continue making art.

"I'm not going anywhere," he says with a big smile, "I love this place."