The streets of downtown Toronto were awash with colour, music and smiles Sunday as the city's Pride parade returned for the first time in two years.

Hundreds of thousands of people lined Yonge Street on Sunday afternoon to celebrate the parade's comeback after it was sidelined by the COVID-19 pandemic. The procession began at 2 p.m. on the corner of Bloor and Church streets.

Colourful floats – some blasting music to energize the crowd -- dancers, drag queens and other marchers waving rainbow flags and carrying signs about love and acceptance slowly walked the route and made their way to Yonge-Dundas Square, where the parade culminated.

Among those who marched include a group who had never walked at a Pride parade until Sunday, community organizations, labour unions, emergency services, sports teams and dignitaries. Phyll Opoku-Gyimah, widely known as  Dr. Lady Phyll, was the parade's international grand marshal.

One of the dignitaries at the parade was Toronto Mayor John Tory, who marched with other members of city council.

He said it was good that city events like Pride were back following a long pause.

"It's so good at a time when rights are being diminished elsewhere in the world that we're able to celebrate the fact that we've made such progress. We've got lots to do. But, I think we're happy respecting each other and embracing each other," Tory said. "And so I think that's what pride is all about."

Tory was also with his grandchild Isabel who came out as part of the LGBTQ+ community. Earlier, the two attended a Pride breakfast hosted by PFLAG (Parents, Families, and Friends of Lesbians and Gays). 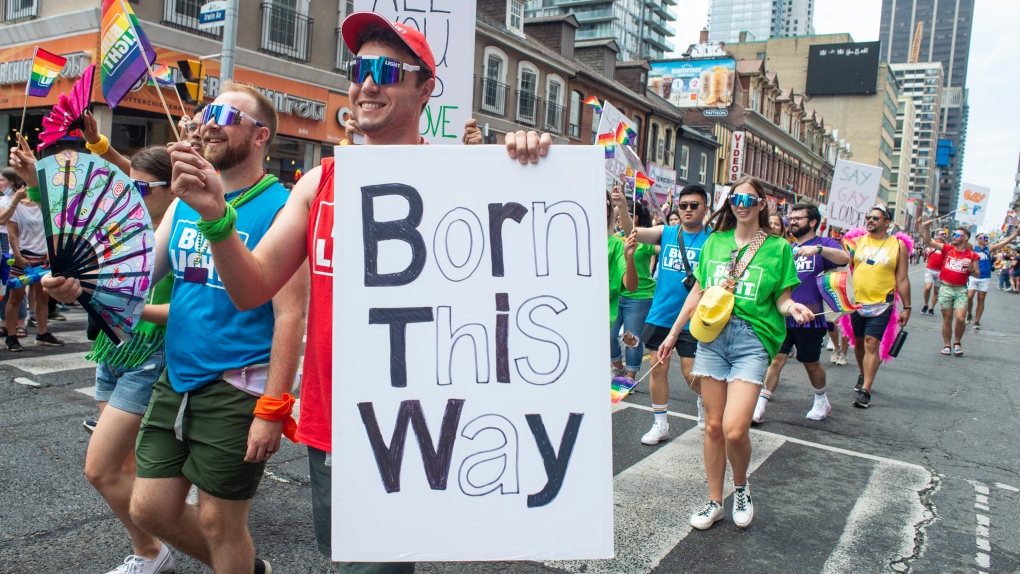 People march in the Pride parade marking the return of in-person festivities for the annual LGBTQ celebration, in Toronto, Sunday, June 26, 2022. THE CANADIAN PRESS/Eduardo Lima

CP24 spoke with dozens of people at the parade, several of whom were their first time at a Pride parade, and all of them were happy to see it back and everyone having a good time. Some of them were from other countries, including the U.S., Israel and Nicaragua.

"I've never been around this many like queer people at once. And it just makes me feel really at home and stuff. So I like it a lot," said one reveler, who moved to Toronto from the United Kingdom. "It feels like a big old family."

When one paradegoer was asked what Pride means to him, he said it is about accepting and expressing who you are and not caring what others think.

"It feels nice to know that there's more than just you and a couple of your friends and just feels nice that there's even like straight people, allies that all support you because throughout your day, obviously there's gonna be people that don't, so it's nice to see everyone celebrating it," he said. 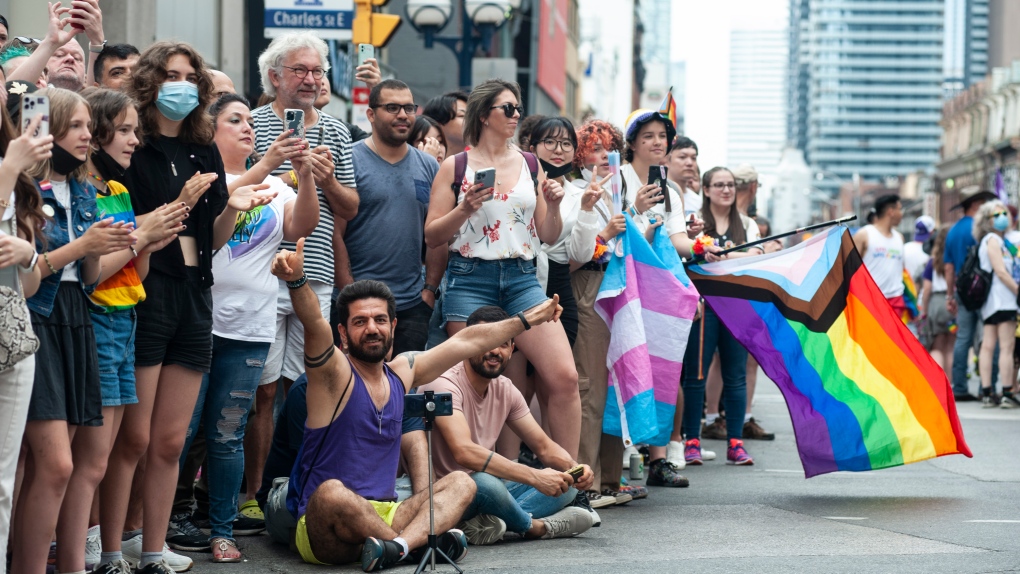 Crowds of people watch the Pride parade, marking the return of in-person festivities for the annual LGBTQ celebration, in Toronto, Sunday, June 26, 2022. THE CANADIAN PRESS/Eduardo Lima

Pride Toronto said it was expecting approximately 1.8 million on Sunday.

Ahead of the weekend, organizers said the festival was working with private security firms to conduct checks at designated spaces.

They say the extra measures are necessary given a reported increase in anti-LGBTQ incidents this month.

- With files from Beatrice Vaisman, Shanelle Kaul and The Canadian Press