Hundreds of child-care spaces at risk due to provincial cuts, report says

In a cut deemed “devastating” by child care advocates, the provincial downloading of some daycare costs to municipalities could mean the loss of hundreds of subsidies for low-income families in Toronto.

In a report released Tuesday, City of Toronto staff revealed how the province’s change to the cost-share formula for daycare subsidies will impact the city’s municipal budget.

The provincial Progressive Conservatives announced in the spring they would only fund 80 per cent of child-care subsidies moving forward, down from 100 per cent.

Tuesday’s report confirmed that the 20 per cent reduction in Ontario government funding will result in a reduction of $15 million – or as many as 760 affordable child-care spaces – as of Jan. 1.

“Child care is already unaffordable in our city,” Councillor Joe Cressy said Tuesday. “And because of Doug Ford’s cuts, it’s about get worse.”

City staff determined that unless councillors can find municipal dollars to bridge the gap, Toronto will lose 760 subsidies — at a time when the waiting list tops 17,000 names.

“There are thousands more that aren’t even bothering to get on the list,” Mercer told CTV News Toronto. “It’s absolutely futile for them … They’re making other decisions, like leaving the city.”

The potential subsidy loss would return the city to “pre-2018” levels of 29,940 available subsidies for low-income families, according to city staff. Currently, there are about 30,700 children receiving a subsidy. 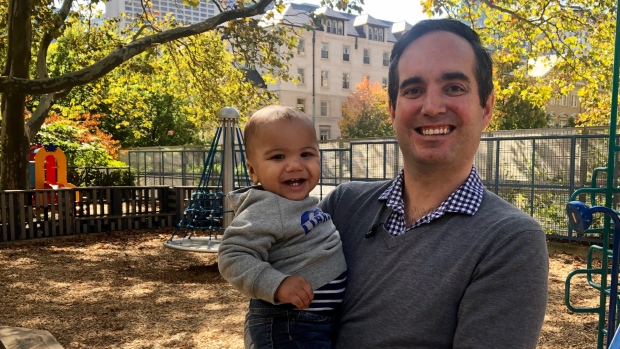 Chris Haskim, Toronto resident, says he does not have a daycare spot confirmed for his son, despite being on more than a dozen waiting lists. (Natalie Johnson/CTV News Toronto)

The government, however, insists the downloading is reasonable.

“100 per cent operational funding is simply just not sustainable, not possible to maintain, with the fiscal station our province faces, so we felt this was a very fair solution to the issue,” Progressive Conservative MPP Stan Cho said Tuesday.

Cho pointed to other provincial investments in child care, including the capital costs for new child care centres and a provincial child care tax credit for some Ontario families.

He is set to return to work in February but, despite being on more than a dozen child-care waiting lists, he does not have a spot confirmed for his 10-month-old.

“February sounds far off, but it’s pretty close when we don’t know what we’re going to do,” he said.

Haskim and his son joined child care advocates at City Hall Tuesday to call on the Ford government to change course on the cuts.

“As a parent, there are such long waiting lists as it is, and that's before these cuts came into place,” he said. “I can only imagine how much worse things are going to get in our city."

The report comes as the City of Toronto begins work on its operating budget for the next fiscal year.

With files from the Canadian press