Hamilton residents dig out of heavy snow on Remembrance Day 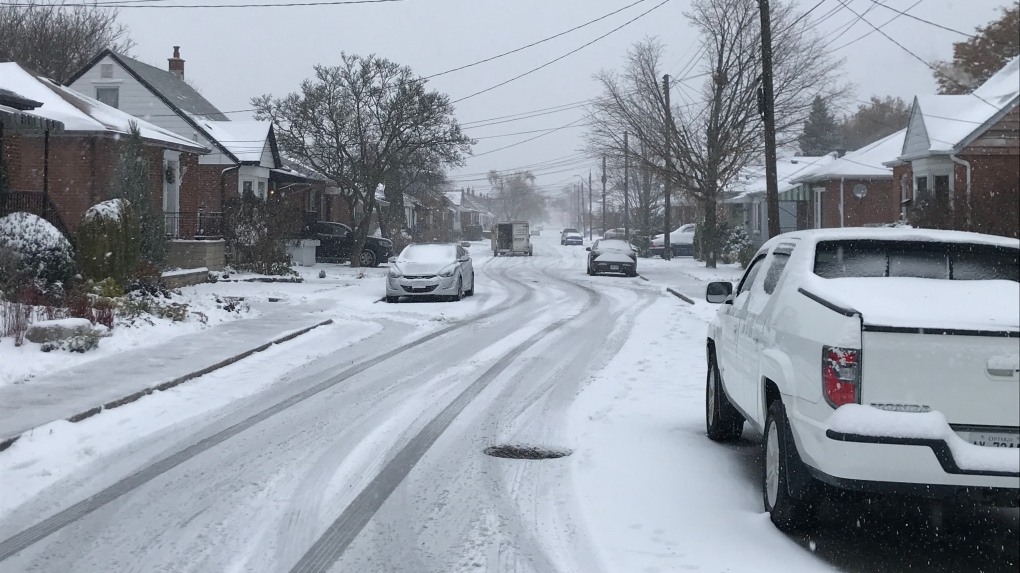 Icy and wet snow was blowing everywhere on Hamilton’s East Mountain Monday afternoon, but residents weren’t waiting for it to end before getting out and shovelling.

Lifelong Hamiltonian Angelo Cino’s attitude was “bring it on!” Despite the fact it’s only mid-November, Cino said he’s been waiting for this.

“It’s about time. I don’t mind the snow.” When asked why, he said “because I’m Canadian and proud of it.”

Lori Parkin lives around the corner and had been shovelling her driveway and sidewalk for around half an hour when CTV News Toronto caught up with her. She said the early snowfall surprised her, but she’s ok with it, for now. “The first snow is always the nice snow, you know, as long as it quickly leaves.”

Unfortunately for Parkin, that’s not the case on the Hamilton Mountain. As much as 25 centimetres could be on the ground by the time the snow is finished falling.

Leo Melo was busy salting his sidewalks after clearing them of the first blast of snow. He moved to Canada from Portugal 16 years ago, and can’t remember the last time we had this much snow on Remembrance Day.

“I haven’t seen snow like this since I came here, especially this early.”

While Elinora said she “likes it,” her friend Aliberto had the opposite feelings about the snow.

“No, I don’t like the snow, because there’s too much of it and it’s hard to travel.”

It’s even harder to trudge through when you don’t have winter boots on.