Ford wants bikes off the road, onto separate trails 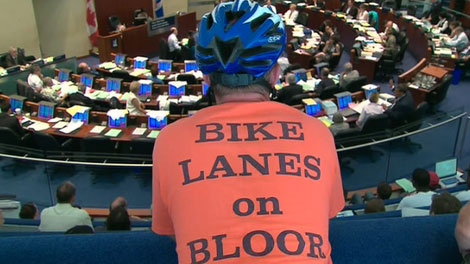 Toronto's bike lanes are up for debate in city hall on Tuesday, July 12.

Cyclists will have to wait until Wednesday to hear whether Mayor Rob Ford's plan to take bikes off the roads and eliminate three existing bike lanes will be voted through.

Council debated for four hours before running out of time to vote on the issue.

Bikers jammed City Hall on Tuesday during a council meeting to protest against the removal of the lanes, which includes year-old lanes on Jarvis Street.

Coun. Mike Layton told CTV News on Tuesday that the Jarvis lanes should remain as they don't have any adverse effects on safety in the city.

"The point of why we have bike lanes is to keep cyclists safe and to keep cars moving at a good speed as well, to have that balance," he said.

"And I think that with the staff report showing it doesn't actually change traffic patterns on Jarvis that much now that we have the lanes in, what's the harm of leaving them?"

Along with removing existing lanes on major streets, Ford wants to create a 100 kilometre network of trails separate from roadways.

Coun. Denzil Minnan-Wong said having separate bike lanes away from major streets is safer for both bikers and drivers.

With files from CTV's Natalie Johnson