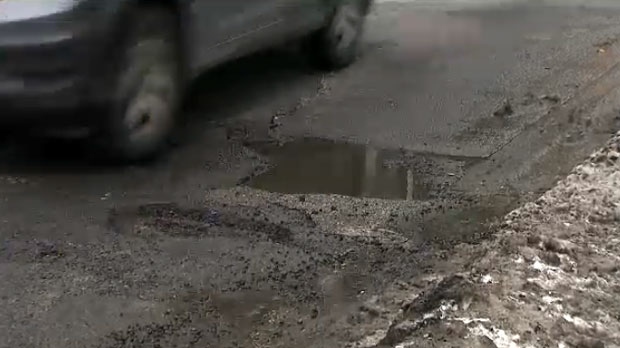 A vehicle is seen driving past a pothole on a downtown Toronto street on Feb. 20, 2019.

The shifting temperatures this winter are creating the “perfect recipe for potholes,” city officials say.

Andrew Bartucci told CTV News Toronto that he was driving southbound on Church Street when his vehicle struck a series of potholes.

“It rocked me,” said Bartucci. “A pothole just rocked that passenger side, immediately blew out the front passenger and back passenger tires.”

Bartucci said that he lost control of his vehicle for a moment, but was able to pull over safely.

“It could have been really dangerous if there were cyclists or pedestrians or parked cars even cause it happened really fast,” he said. “The wheel was bent on impact and the tire blew instantly.”

According to city data, transportation services have repaired 11,262 between Jan. 1 and Feb. 13 of this year.

“We’ve had a lot of freeze, thaw cycles, so that is the perfect recipe for potholes,” said Mark Mills, superintendent of road operations for the City of Toronto.

“What happens is water penetrates the top layer of asphalt, it freezes, then once we have the thaw that creates a void under that asphalt, traffic drives over that void and then we have a pothole.”

The city spends about $4 million to $5 million on pothole repair every year, Mills said.

Mills said that most potholes are filled within about four working days after a call is made to 311, but the city does prioritize when receiving complaints about potholes on expressways or major roadways.

Bartucci said the potholes that damaged his vehicle appear to have been “patched” since the incident.

The repairs to his vehicle will cost Bartucci about $3,000. He has since filed a claim with the city in hopes of being reimbursed for the damage.