Jena Butts had just spent three months in Puerto Plata, where she found and fell in love with a stray dog. She decided to bring the animal back to Canada and find it a good home.

Butts, along with the rescue named Winston and her own dog, arrived at Toronto Pearson International Airport around 1:30 a.m. on Saturday. At about 2 a.m. her dog came out—but Winston did not.

“(I) spoke to some of the baggage people as they were there and said ‘I’m still waiting for a dog.’ They told me there’s nothing else there,” she said.

Around 3 a.m. she was advised by a customs agent to go home and give the airline a call later, as there were no further staff around.

“I was very angry and I didn’t understand how nobody could be at the airport to help me find my dog,” she said. “This is a living creature.”

Butts spent the rest of the morning trying to contact the airline, Air Transat, to find out if Winston had even made it to Toronto or if he was still in Peurto Plata.

About 21 hours later, customs at Pearson airport spotted the crate.

“He was found in a corner with lost bags,” Butts said.

A customs agent had broken Winston out of his crate to give him water, Butts said, but the animal was still covered in urine by the time she got to him.

“He’s very traumatized,” she said. “I will definitely not be travelling with dogs for a while now.” 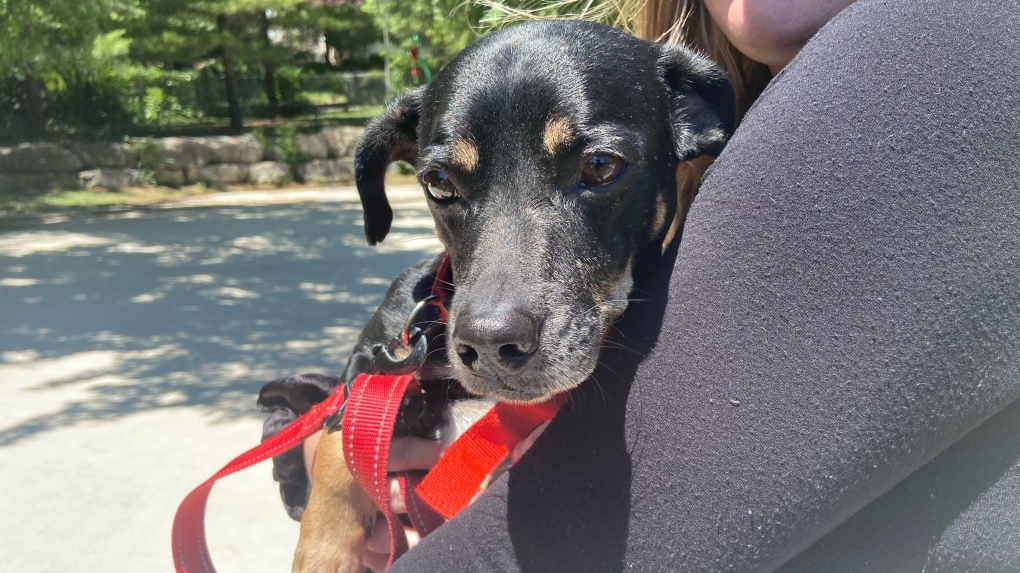 Jena Butts holds Winston after he spent about 21 hours stuck in his crate after a flight into Toronto Pearson International Airport. (Carol Charles)

Butts said she received an email from the company GTA dnata, a service provider for Air Transit at Pearson airport, apologizing for the incident and offering her a gift card as compensation.

“While there were reasons for the service failure that left you wondering about the whereabouts of your treasured pet, we can only assure you that we will take the necessary steps to ensure no other pet owner has to experience a similar situation,” Chief Executive Officer Antonio Alvarez wrote. “You entrusted them with your precious cargo and regrettably, we let you down.”

“As a dog owner, I can fully appreciate the anguish that our failure caused you and we would like to offer you a small token of compensation in the form of a gift card that you can use at your discretion.”

Butts said she still has not heard from Air Transat directly. When reached for comment, the airline told CTV News Toronto they have requested a full investigation into the incident.

“We are deeply sorry that our client had to go through this stressful situation. We will contact them directly to provide the full details and offer compensation. “

Butts said she isn’t all together interested in compensation. What she wants the airline to do is create a better policy when it comes to the handling of live animals on their planes.

“I’m still very shaken up,” she said. “It’s hard to put my words together. There needs to be a procedure, better policies.”

“I feel like (Air Transat) could have handled the situation in a much better way and, you know, with a little bit more empathy because nobody seemed to care.”

She said that Winston was supposed to be taken to his new home the day he landed, but that has been postponed a day because of the traumatic experience.

Over the last few weeks travellers flying through Pearson airport have made complaints about lost baggage and delayed or cancelled flights. Photographs shows thousands of bags sitting idly in the baggage claim area, waiting for owners to come collect them.

One man told CP24 that he arrived in Toronto 16 days ago and was still waiting for his lost luggage.

The Greater Toronto Airport Authority cited staffing shortages, flight delays and cancellations and temporary mechanical disruptions as some of the reasons for the “challenges with baggage.”

For the second time in less than a month, a resident of Ashcroft, B.C., died while waiting for health care.