The union representing 55,000 education workers across Ontario will end their mass walkout on Tuesday after Premier Doug Ford offered to rescind the legislation that made the strike illegal.

Laura Walton, president of the Canadian Union of Public Employees’ (CUPE) Ontario School Board Council of Unions, said education workers will return to schools on Tuesday. Several school boards in Toronto announced that students will be back in class alongside education workers.

Walton said Ford agreed to put his commitment to repeal the legislation that made the Ontario education workers’ strike illegal in writing.

“We have received and can confirm that the premier will introduce and support legislation that will repeal Bill 28 in its entirety,” Walton said at a Monday afternoon news conference.

Walton said Ford agreed to take this commitment one step further and strip the law from the province’s history.

Introduced in the Legislative Assembly last Monday by Education Minister Stephen Lecce and passed late Thursday afternoon, the “Keeping Students in Class Act” made it illegal for CUPE’s education workers to go on strike by using the notwithstanding clause to override parts of the Canadian Charter of Rights and Freedoms. It also imposed a four-year contract on them.

Lecce and Ford confirmed that the government will revoke Bill 28 “at the earliest opportunity” to ensure students return to the classroom.

I’m glad CUPE has agreed to withdraw its strike action so kids can return to class. We’ll be back at the table to negotiate a fair deal — for students, parents, workers and taxpayers.

“As we have always said and called for, kids need to be back in the classroom, where they belong,” Lecce said in a statement after CUPE’s announcement.

Earlier on Monday, Ford said he was willing to rescind the legislation that made the Ontario education workers’ strike illegal if their union was willing to stop their mass walkout.

Negotiations between the two parties have been at a standstill for over a week. Lecce refused to look at a counteroffer CUPE put forward last week unless they took strike-action off the table.

But now, as schools across the province close for a second-school day, Ford said he is willing to be “flexible” and make a “fair deal” that offers more help to lower income workers. 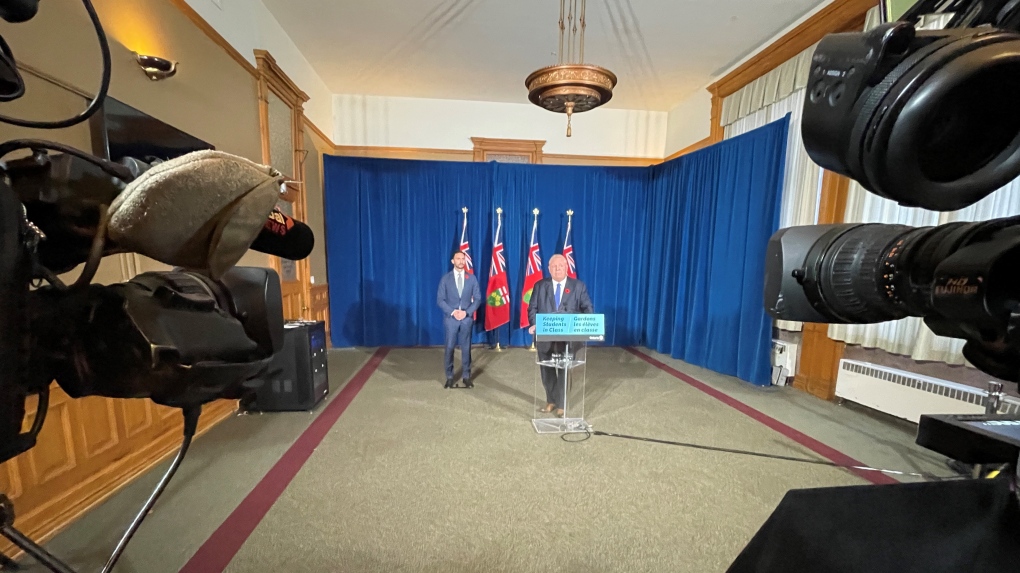 Premier Doug Ford and Education Minister Stephen Lecce hold a press conference on Nov. 7, 2022. (CTV News Toronto/ Corey Baird).“Students have been through so much. They don't deserve to be caught up in the middle of these negotiations. What they need and deserve is to be back to catch up on their learning. For the sake of our students, CUPE please accept this offer. Take strike action off the table and let our kids back in class,” Ford said.

Lecce stood behind the premier during the Queen’s Park news conference, but he did not speak at the podium.

Speaking to reporters after Ford’s news conference, Peter Tabuns, interim leader of Ontario’s New Democratic Party, said the government has the power to get students back in classrooms.

“I think the pressure on the premier is going to be huge ... to actually put a fair deal on the table, something that would resolve this crisis,” Tabuns said.

WHAT'S ON THE BARGAINING TABLE?

Lecce’s latest offer was a four-year deal that included a 2.5 per cent annual raise for workers who make under $43,000 and a 1.5 per cent yearly wage increase for the rest of the workforce.

That was up from their initial offer of a two per cent raise for workers who make less than $40,000 and a 1.25 per cent raise otherwise. However, CUPE said these wage bumps are dependent on hourly wages and pay scales, which means most workers who earn the lowest wages would not actually get a 2.5 per cent raise.

At the onset of negotiations, CUPE was seeking an annual salary increases of $3.25/hour (11.7 per cent), early childhood educators in every kindergarten class, five additional paid days before the start of the school year, 30 minutes of paid daily prep time, an increase in overtime pay and a $100 million investment in new job creation.

Over the weekend, the Ontario Labour Relations Board held a hearing to determine the legality of that job action. A ruling is expected Monday.

With files from CP24's Joanna Lavoie and the Canadian Press.

Two children are dead and six others are injured after a Laval city bus crashed into a daycare Wednesday morning. The driver of the bus, a 51-year-old man, has been arrested and faces charges of homicide and dangerous driving, police say.

An 'awkward' attempt at a handshake between Alberta Premier Danielle Smith and the prime minister Tuesday is another example of leaders from the western province hesitating before shaking Justin Trudeau's hand, say political experts.

The sacrifices female killer whales continue to make for their sons well after they are weaned is negatively affecting their reproductive health, according to new scientific research.

Turkiye-Syria earthquake: How to give to rescue and recovery efforts

In the aftermath of the deadly earthquake that struck Syria and Turkiye, Canadians are donating money and supplies to rescue and relief efforts there. CTVNews.ca rounds up ways you can contribute to charities based in Canada and abroad.

An associate of Ontario’s self-described “crypto king” was operating his own fraud scam parallel to the multi-million dollar Ponzi scheme, court documents allege.