The Ontario education workers' strike will end on Tuesday after Doug Ford offered to rescind Bill 28.

Ford confirmed Monday morning he would repeal the legislation if CUPE ended the strike.

Below is a timeline of Monday's events:

With the strike ending on Tuesday, what happens next between the union and the Ford government? CTV News Toronto's Phil Tsekouras breaks down the next steps in the negotiations.

Several schools across the province confirmed students would return to in-person learning on Tuesday.

On Monday morning, Ford accused Prime Minister Justin Trudeau of being "selective" when it comes to condemning provinces' use of the notwithstanding clause, and is warning against him engaging in constitutional talks with Canada's premiers.

"It's very disappointing. The prime minister is being selective within certain provinces, about his concerns of overturning the notwithstanding clause," Ford told reporters.

Parents and guardians are encouraged to contact their kid's school for information about what will happen with school activities and events that were postponed or rescheduled as a result of the strike.

The York Region District School Board (YRDSB) announced it will reopen its schools to students, and all transportation services will be up and running on Tuesday.

The YRDSB asks parents and guardians to call ahead if their child is not coming in to school.

The Toronto District School Board confirmed Monday afternoon that all schools will reopen for in-person learning on Tuesday.

I’m glad CUPE has agreed to withdraw its strike action so kids can return to class. We’ll be back at the table to negotiate a fair deal — for students, parents, workers and taxpayers.

Education Minister Stephen Lecce has released a statement after CUPE announced they would end their strike.

"CUPE has agreed to withdraw their strike action and come back to the negotiating table. In return, at the earliest opportunity, we will revoke Bill 28 in its entirety and be at the table so that kids can return to the classroom after two difficult years. As we have always said and called for, kids need to be back in the classroom, where they belong," Stephen Lecce said.

BREAKING NEWS: The union representing 55,000 education workers across Ontario is committing to end their mass walkout on Tuesday after Premier Doug Ford offered to rescind the legislation that made the strike illegal.

CUPE Ontario School Board Council of Unions President Laura Walton said Ford agreed to put his commitment to repeal the legislation that made the Ontario education workers’ strike illegal in writing.

“We have received and can confirm that the premier will introduce and support legislation that will repeal bill 28 in its entirety,” Walton said.

"We have received and can confirm the premier will introduce and repeal bill 28 in its entirety," CUPE-OSBCU president Laura Walton said.

The CUPE press conference has begun.

"This morning Doug Ford announced he would rescind BIll 28.. and that's a credit to a power of our members," National CUPE President Mark Hanock said.

CUPE has rescheduled the press conference for 12 p.m. They did not give a reason for the delay.

CUPE was set to begin the press conference at 11 a.m. There is no word on what has caused the delay.

CUPE is set to make announcement after Ford's offer to drop the anti-strike law. Watch live in the player above at 11 a.m.

During Ford's news conference Monday morning, he pleaded with CUPE to send education workers back into schools so that students can return to in-person learning.

"I desperately hope that CUPE shows the same willingness to compromise as we are today," Ford said. "I hope they hear my plea to keep students in class, but that's not something I can guarantee you." 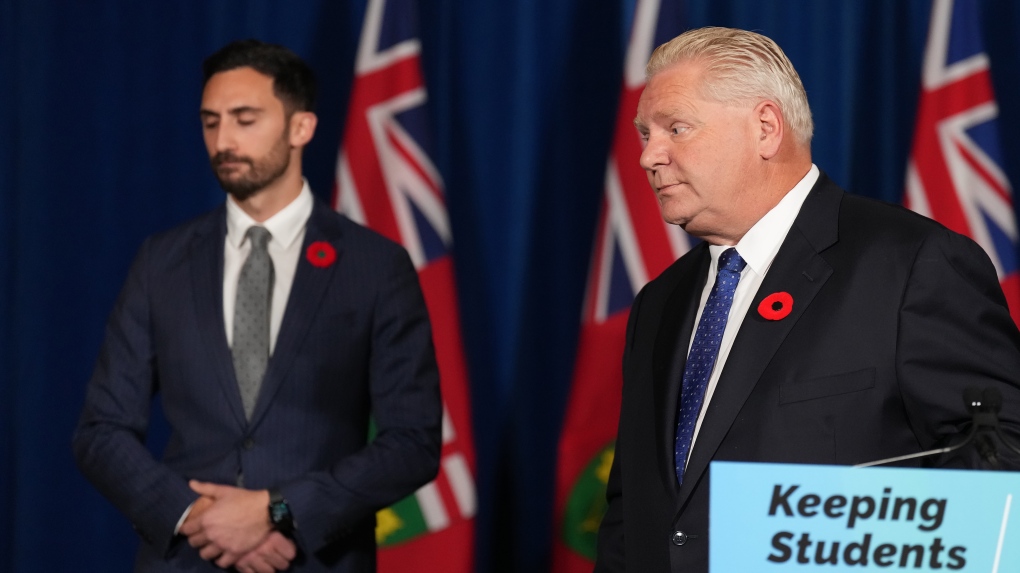 Following Ford's news conference, NDP Leader Peter Tabuns said at Queen's Park that if the premier was serious about withdrawing the legislation he should immediately recall the legislature.

The president of CUPE, along with a number of national and provincial labour leaders, are expected to make an announcement at 11 a.m.

Importantly though, remember that the mediator ended talks because the two sides were too far apart. So unless the strike threat was the sole issue one or both parties are going to have to move #onpoli #onted

Premier Doug Ford said he is willing to rescind the legislation that made the Ontario education workers’ strike illegal if their union is willing to stop their mass walkout.