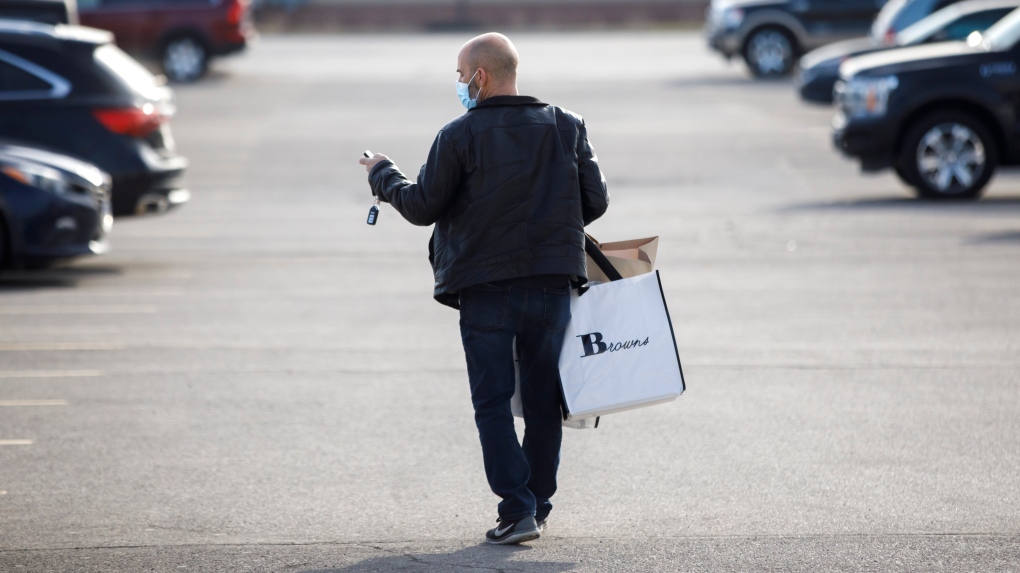 A shopper leaves Vaughan Mills Shopping Centre in Vaughan, Ontario, Sunday, Nov. 29, 2020. As malls in the Toronto core have shut due to provincial orders, shoppers flocked to malls on the outskirts of the Greater Toronto Area for Black Friday weekend shopping. THE CANADIAN PRESS/ Cole Burston

TORONTO -- The Ontario government is warning of an inspection blitz on big box stores in the Greater Toronto Area this weekend in an effort to ensure they are complying with COVID-19 lockdown regulations.

In a news release issued Thursday, the government said that about 50 ministry inspectors, as well as local bylaw and police officers, will visit big box stores in the regions of Toronto, Hamilton, Peel, York and Durham on Saturday and Sunday.

"We know most businesses are operating responsibly and taking the necessary steps to protect their workers and customers, and I want to thank them for their efforts," said Minister of Labour, Monte McNaughton said in a statement.

"Where we find an employer who has been acting in bad faith, we won't hesitate to take action by immediately slapping them with a ticket and a fine. There will be real consequences for those who break the rules."

A stay-at-home order came into effect across Ontario on Thursday. Under the order, small and medium-sized retailers are allowed to operate between 7 a.m. and 8 p.m. for curbside pickup or delivery only.

Big box stores like Walmart and Costco, on the other hand, can continue to operate with their hours unaffected along with grocery stores with capacity restrictions.

Workplace health and safety inspectors will have the authority to ticket supervisors, employees and patrons not complying with COVID-19 regulations. They may also temporarily close a premises and disperse groups of more than five people, the government said.

Businesses and individuals found not to be following the rules can be fined $750, or $1,000 for preventing others from following the protocols.

Maximum fines are set at up to $100,000 for an individual or $10 million for a corporation. It could also result in prosecution or a year in jail.