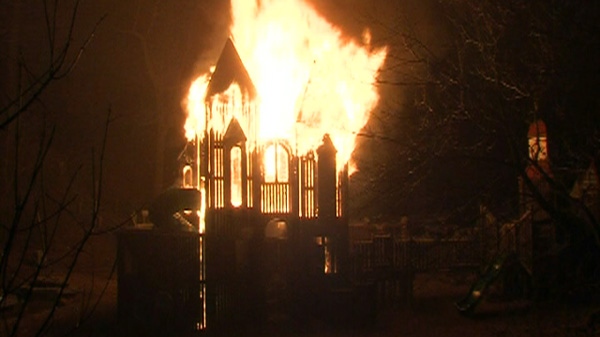 Toronto police say arson is to blame for an overnight blaze in High Park.

Last weekend the wooden castle in High Park went up in flames, a week later, the community is already planning its strategy to rebuild.

Community members gathered at the High Park Baptist Church Monday evening to discuss a vision for the new park, which was set on fire by an arsonist in the early morning hours on March 17.

Since the park burned down, Landscape Ontario pledged approximately $300,000 worth of parts, design and labour to rebuild. Other groups have also pledged cash and labour.

Firefighters from his platoon were some of the first to respond to the call, he told CP 24.

"They said that, initially, they had a lot of fire, there was no problem locating the fire in the park, though High Park is a rather large park," Shultz said.

Luckily, firefighters were able to contain the large fire, Shultz said, saving much of the structure surrounding the castle.

Those same firefighters are now promising money and any needed technical skills when volunteers rebuild.

The community effort displayed Monday is fitting, considering the park was originally built by a team of volunteers in 2008.

Coun. Gord Perks, who represents the ward next to the park, helped out with what he said were "three or four badly hammered nails in the original structure."

Though Perks said he was devastated when fellow Coun. Sarah Doucette called him with news of the fire, he was also heartened with the meeting taking place in the church.

"There are tables filled with people talking about how to make it a park that related to the naturalization of High Park, a park that's accessible to children with disabilities," Perks said. "Some people like the old castle design and some people want to see something different."

Perks said he thinks the park should remind citizens of the original park, even if the new structures are slightly different.

Police have charged a 19-year-old Toronto man in connection with the arson. He will appear in court on May 1.