Cheney cancels speech in Canada due to safety concerns 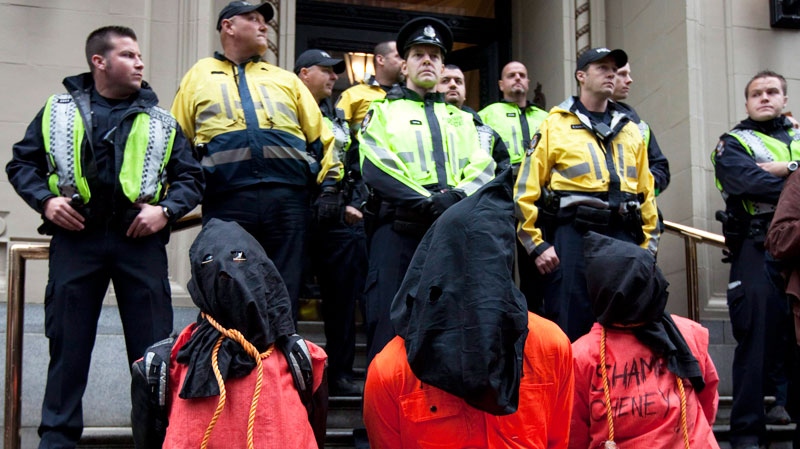 Police look on as protesters opposed to former United States Vice-President Dick Cheney's visit to Canada rally outside where he is speaking in Vancouver Monday, Sept. 26, 2011. (Jonathan Hayward / THE CANADIAN PRESS)

TORONTO - Former U.S. vice-president Dick Cheney has cancelled a Canadian speaking appearance due to security concerns sparked by demonstrations during a visit he made to Vancouver last fall, the event promoter said Monday.

Cheney, whom the protesters denounced as a war criminal, was slated to talk about his experiences in office and the current American political situation at the Metro Toronto Convention Centre on April 24.

However, Ryan Ruppert, of Spectre Live Corp., said Cheney and his daughter Elizabeth had begged off via their agent.

"After speaking with their security advisers, they changed their mind on coming to the event," Ruppert said.

"(They) decided it was better for their personal safety they stay out of Canada."

Last Sept. 26, Cheney's appearance in Vancouver was marred by demonstrators who blocked the entrances to the exclusive Vancouver Club.

The activists, who at one point scuffled with police, called for Cheney's arrest for war crimes and booed guests as they arrived at the $500-a-ticket dinner.

One man was arrested for choking a club staff member.

Ruppert said the "thugs" put everyone at risk and forced Cheney to remain inside the club for seven hours until police were able to disperse the protesters and deem it safe for him to leave.

"It was a complete disaster for them because it's a major security issue," he said.

The upshot, he said, is that discussion over American policy on such issues as Guantanamo Bay or the Iraq war is being silenced.

"You lost that conversation because you're talking about a group of thugs," Ruppert said.

"It's a real sad story because it really overshadows what the peaceful protesters, who often have very legitimate points, would be doing and saying."

Those who bought tickets to the Cheney event can either get a full refund or exchange them for an appearance by free-speech activist, Mark Steyn.

"It's incredibly disappointing for us," said Ruppert, who was planning for as many as 5,000 people to attend the Cheneys' talk.

"We were very excited about this event."

Rupert did not say how many tickets had already been sold at prices ranging from $79 to $595.

Cheney critics accuse him of endorsing the use of water boarding and sleep deprivation against detainees while serving in former president George W. Bush's administration.

Before the Vancouver event, Human Rights Watch urged the federal government to bring criminal charges against Cheney, accusing him of playing a role in the torture of detainees.

Don Davies, the NDP immigration critic, also argued that Cheney should not have been allowed into Canada.

Cheney has vigorously defended interrogation techniques on the grounds they saved hundreds of thousands of lives.