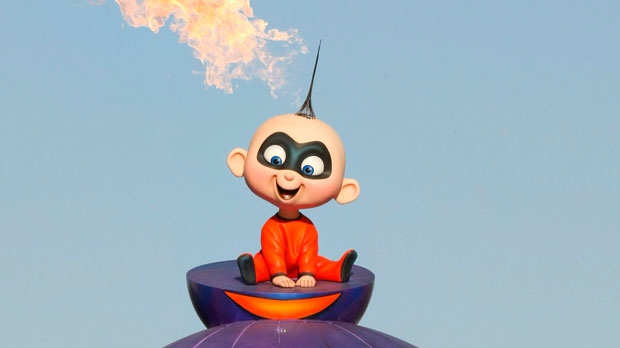 In this image released by Disney, the character Jack Jack, from Disney Pixar's "The Incredibles", rides atop the Omnidroid during a rehearsal for the new Pixar Play Parade at Disney's California Adventure Park in Anaheim, Calif., on Thursday, March 13, 2008. (AP Photo/Disney, Scott Brinegar)

Canadian Domee Shi is the first female director to helm a Pixar short film and will have her project "Bao" screen before the upcoming feature "Incredibles 2."

The eight-minute "Bao," which will premiere later this month at the Tribeca Film Festival in New York, is billed as the story of "an empty-nesting Chinese mom (who) gets another chance at motherhood when one of her dumplings springs to life."

Shi was born in China and moved to Toronto with her family when she was two. She went to Sheridan College in Oakville, Ont., for animation and earned an internship at Pixar, which led to storyboarding work on "Inside Out," "The Good Dinosaur" and "Toy Story 4."