A report outlining regular harassment at the Toronto Police Service could make it easier for some members trying to get justice through tribunals and the courts, says a lawyer representing an officer who claims she was repeatedly harassed and demeaned for her gender and her ethnicity.

But without taking the next step and holding individual officers accountable, a change to the culture of the police force may be as hard as ever, Angelo Sciacca says.

“I think the time for words is over. We’ve heard the police make statements to the media. They could be just empty words. They have to take this report and turn it into action,” he said in an interview.

Sciacca represents a female police officer who CTV News Toronto isn’t identifying because she is concerned about more harassment. She has gone by “Darya” as a pseudonym.

In February, Darya filed an amended application with Ontario’s Human Rights Tribunal alleging a pattern of harassment that stretched back more than a decade. The Toronto Police Service has denied her allegations in informal responses to the application, her lawyer said.

In one incident in March, 2011, the complainant said her partner intentionally closed a car door on the leg of someone he was arresting. When she objected, he “hit her with full force on her left breast,” she claimed in the application.

She claims that superior officers didn’t conduct a proper investigation, including to take photos of her injury, and the Toronto Police Association told her not to lay charges because she was a “rookie” and it would ruin her career.

“The Applicant was expected to endure assault from male officers in order to keep her job,” the filing says.

“When she did report the incident, she faced almost immediate reprisals. She was told not to take it further, she was called a rat and a liar, and had her car keyed and dog excrement left on her windshield and that was in a police parking lot,” Sciacca said.

Darya, who is of Iranian origin, was called a “loner” for avoiding alchohol-centric social gatherings, was told by colleagues to take an English as a second language course even though she fluently speaks four languages, and faced sexualized comments about her body, the application says.

The filing alleges the harassment she experienced is systemic — and Scaccia says the report released this week may help him prove that at the tribunal.

According to the survey commissioned from Deloitte by the Toronto Police Service, 60 per cent of the 908 people surveyed said they had experienced or witnessed harassment or discrimination within the TPS in the past five years. 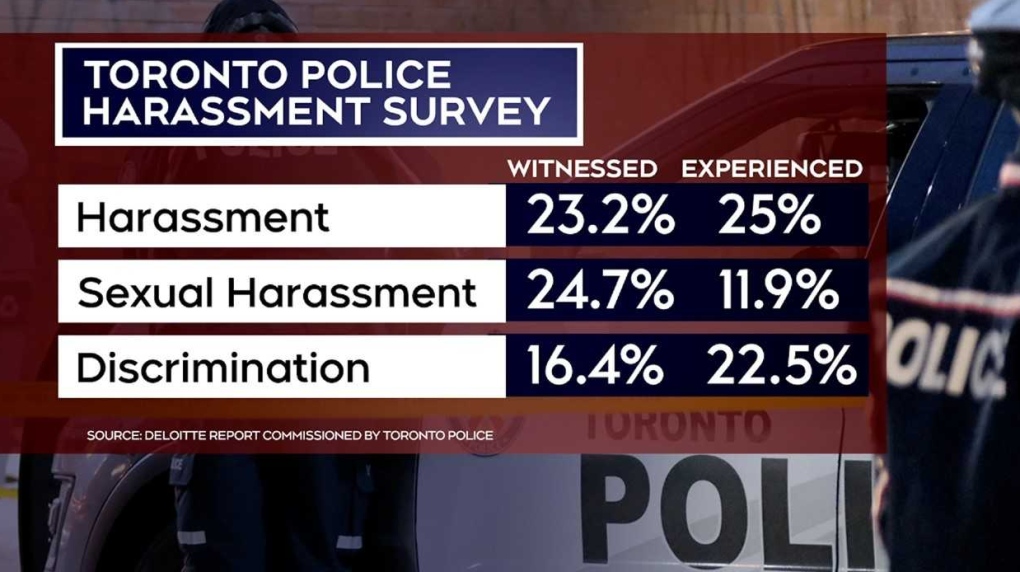 The report was dated March 2022, and was released the same day the TPS apologized for systemic racism after its own data showed it used force more against Black and racialized people.

“Harassment and discrimination have no place in our organization,” said TPS Board Chair Jim Hart in a statement released this week.

“The Board and Service are dedicated to listening and doing better every day, and we remain committed to fostering a progressive and inclusive culture. We know that doing so will benefit each and every member as well as the communities we are very proud to serve.”

The force said it joined a working group on respectful workplaces in policing, made up of 16 police services from across the province, has revamped its workplace harassment investigation process, and has added anti-harassment training for all supervisors and senior officers. Over 1,000 supervisors have received this training to date.