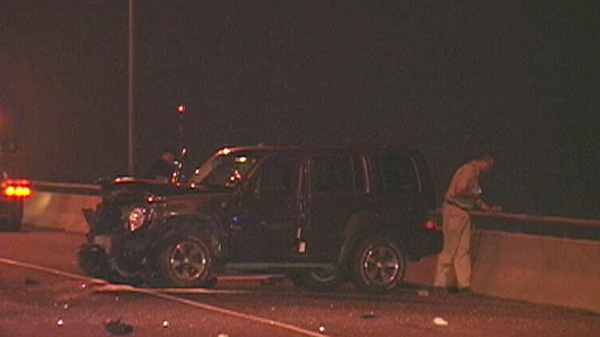 A passenger from one of the vehicles involved in a two-car collision on the Burlington Skyway on Friday night has died as a result of her injuries.

Maria C. Jimenez-Falardo of St. Catharines died shortly after midnight on Saturday, police said. The 47-year-old woman was a passenger in a Honda Civic along with three other people. The other two passengers of the vehicle remain in hospital with non life-threatening injuries. The driver, a 46-year-old male from St. Catharines, has since been released.

The collision, between a Jeep and a Honda Civic, happened around 10:30 p.m. in the Niagara-bound lanes of the Queen Elizabeth Way near the top of the Burlington Skyway, according to the Ontario Provincial Police.

Burlington Fire Department crews were called to the scene Friday night to assist in the extraction of the occupants of the Honda.

The driver of the Jeep, a 37-year-old female from Hamilton, was transported to hospital with non life-threatening injuries and has since been released, police said.

The QEW southbound lanes of the Skyway Bridge were shut down at Eastport Drive until 2:30 a.m. The collision remains under investigation.