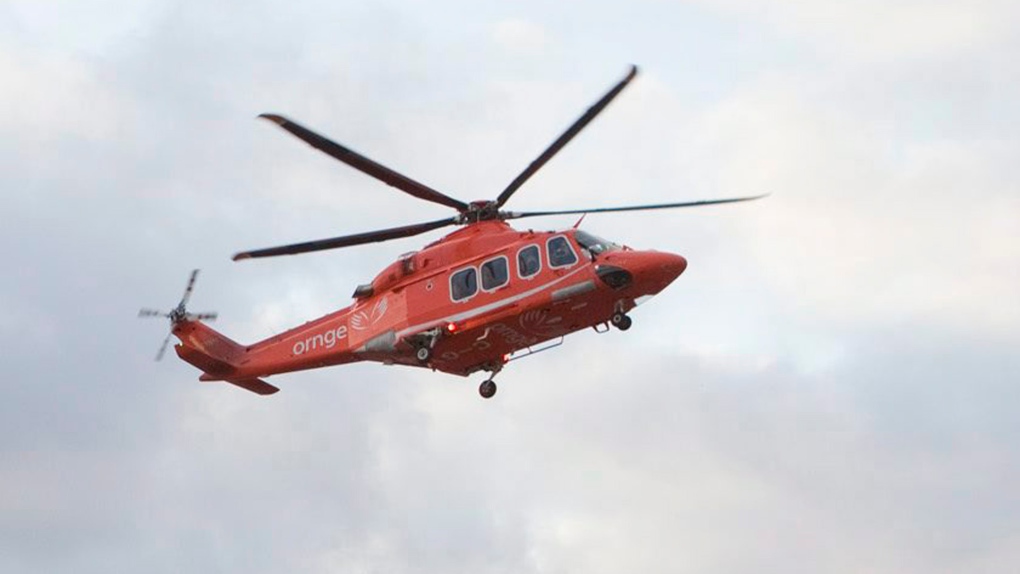 An Ornge helicopter is pictured in this file photo from Sunday, February 26, 2012. (Pawel Dwulit /The Canadian Press)

A 15-year-old boy is in custody after another boy was stabbed at a house party in Clarington on Sunday morning.

Durham Regional Police say that they were called to a home on Scottsdale Drive, east of Liberty Street North, at 1:05 a.m. for reports of an armed person.

They found a 15-year-boy suffering from several stab wounds.

He was air-lifted to a Toronto hospital trauma centre in serious but stable condition.

Officers located a suspect a short distance away and placed him under arrest.

He was charged with aggravated assault, assault with a weapon and weapons dangerous.

The boy, who cannot be named per the terms of the Youth Criminal Justice Act, was released from custody on an undertaking.

Canadian Prime Minister Justin Trudeau took a plunge this weekend when he decided to throw caution to the wind and go bungee jumping just outside of the Ottawa area on Sunday.

RCMP seeing 'significant increase' in fraudulent activity in Canada since 2020

Citing a 'significant increase' in fraudulent activity in Canada in the last two years— the majority of which in the last year has been happening online—the RCMP is calling on Canadians to be aware of scammers' tactics.

The would-be winners of almost $29,000 at a U.S. fishing tournament were disqualified on Friday, after it was discovered their fish were stuffed with lead weights and fish fillets.

Rent support, dental cheques would be 'eviscerated' by inflation: Conservatives

Liberal payments for dental care and rental housing will only add to inflation, without providing relief from the rising cost of living, Conservative MPs argued in the House of Commons on Monday.

Quebecers head to the polls, under half of voters have cast a ballot

Quebecers are casting their votes Monday after a five-week election campaign. Incumbent premier Francois Legault's CAQ party has held a comfortable lead since the campaign began, but the battle for second has been tight between the four main opposition parties: Liberals, Quebec solidaire, Parti Quebecois and Conservative Party of Quebec.

Athletes say beneath the surface of Rowing Canada is a toxic environment within the national organization, which prompted a third-party investigation.

A trial that started this week in Washington, D.C., is the biggest test yet in the U.S. Justice Department's efforts to hold accountable those responsible for the attack on the Capitol on Jan. 6, 2021. On trial is extremist leader Stewart Rhodes, founder of the Oath Keepers extremist group, and four associates.