Average wait times for patients being admitted to an Ontario hospital from an emergency room appear to be steadily increasing, with a new record reached in October.

New data released by Health Quality Ontario (HQO) on Thursday shows patients spent an average of 22.9 hours in an emergency room that month waiting to be admitted.

This is up from 21.3 hours in September and 20.7 hours in August. It also represents the highest average wait time for hospital admissions from Ontario ERs in the last year.

According to the HQO, just 21 per cent of patients were admitted from the ER within the provincial target of eight hours.

For patients not being admitted to hospital, wait times were significantly more manageable. On average, about 88 per cent of high-urgency patients left the emergency room within eight hours and 72 per cent of low-urgency patients finished their visit within the target time of four hours.

On average, the HQO says patients waited about 2.2 hours in an emergency room for their first assessment by a doctor. 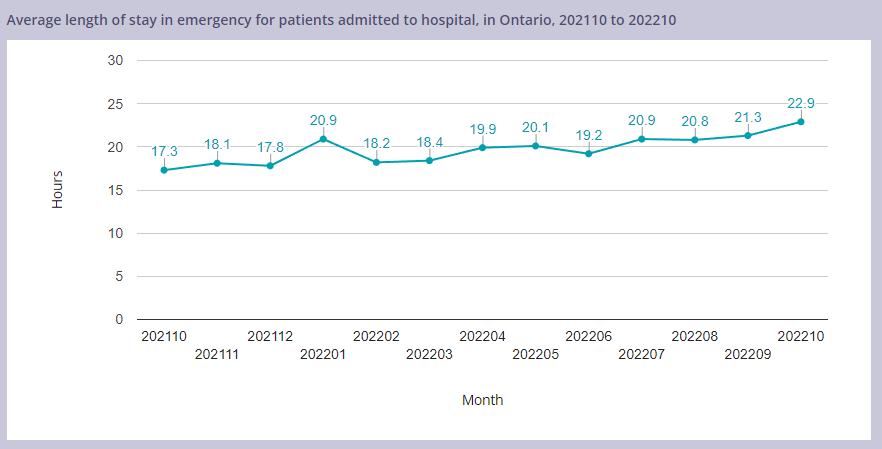 The Progressive Conservative government released their plan to stabilize the health-care system in August. Their strategy includes an investment in private clinic surgeries, a pledge to add up to 6,000 new health-care workers and Bill 7—legislation that allows hospitals to transfer patients waiting for a long-term care home spot to a home not of their choosing or serve them a daily $400 fee.

The goal, the government said, is to free up beds in acute care for those who needed it.

However, months after the plan was announced, patients and front-line workers are still reporting long wait times and a lack of beds. Many hospitals have also said they are operating over capacity in part due to the triple threat of influenza, COVID-19 and RSV this fall.

Last month, Liberal MPP Dr. Adil Shamji told reporters that September 2022 was the worst on record for hospital wait times, “extending all the way back to 2008.”

“No matter how you look at this data, whether it month over month, or a year over a year, health-care performance is continuing its dramatic nosedive and unfortunately is now in freefall,” he said at the time.

An Ontario Health report showed that in September, an average of about 949 patients were waiting for a hospital bed in an emergency room at 8 a.m. daily.

Health Minister Sylvia Jones has previously said that long wait times in hospital emergency rooms “are not new issues and not new problems.” The PCs have repeatedly said the issues with the province’s health care stem from before they were elected in 2018 and that their government is “not okay with the status quo.”

In a statement, a spokesperson for the minister told CTV News Toronto they are taking a "team Ontario approach" to the problem, including increasing hospital capacity by adding 3,500 new hospital beds.

“We know emergency department volumes have been increasing year over year and we are not okay with the status quo," they wrote.

The Ontario NDP has expressed concern for the health-care system heading into the winter months.